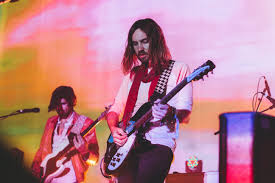 Tame Impala will perform at Fiserv Forum May 30. Photo via Wikimedia Commons

The five-year period between the release of Tame Impala’s third studio album “Currents” and the release of his fourth studio album “The Slow Rush” will finally be over when the album comes out Friday, Feb. 14. But for Milwaukee residents who made their way to The Back Room at Colectivo last night, that wait ended just a tad earlier than it did for everyone else. 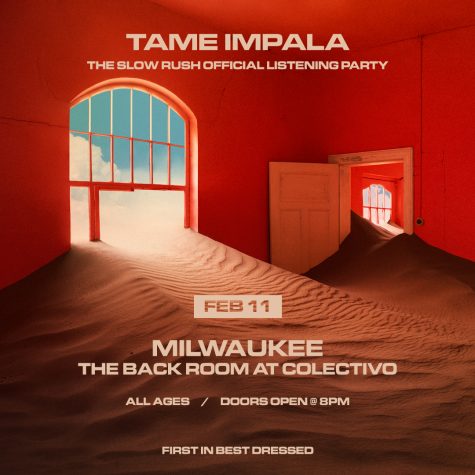 Tame Impala hosted a listening party at The Back Room at Colectivo Tuesday night. His fourth studio album comes out Feb. 14. Photo via Twitter

By 8:30 p.m., The Back Room at Colectivo was nearly at capacity, and a woman took the stage to inform everyone that they would be hitting play on the album soon and that they would let it play twice all the way through.

While four songs have already been released as singles up to this point, eight other tracks remain unreleased until Feb. 14, and the crowd was anxious to get a sneak peak.

The first track, “One More Year,” opens with a heady/spacey synth. This song has a slow build that picks up about halfway through with an irresistible drum beat. Just over five minutes, this song is a relaxing opener for the album.

Track two, appropriately titled “Instant Destiny,” instantly catches the ear with high falsetto vocals from Parker that immediately bring back memories of “Disciples” from his third album. This song is carried by a very reliable drum beat, and much like the album as a whole, it features impressive drum fills.

Something that Parker has always been able to do well is manufacture a vibe. On track four, “Posthumous Forgiveness,” which is already released to the public, the first half feels almost like a tasteful movie score, but with two minutes and 14 seconds remaining in this track, Parker seamlessly transitions to what sounds like a different song altogether. And while there’s a definite distinction, both parts somehow still go together, creating one cohesive vibe on what is the third-longest song on the album.

The second-longest song, which is track number five, “Breathe Deeper,” brings listeners a funky/groovy sound that might be compared to the late 1960s group Parliament. This song’s instrumentation reminded me a bit of the Parliament song “Flashlight.” The bridge of the song features a stripped down synth-only sound before Parker eventually brings a bass line back followed by a drum beat, then returning the song to full capacity.

Also noteworthy is track seven, titled “On Track.” This might be the “sad-boi song” of the album, as it features vocals from Parker that feel a bit more emotional paired with guitar and synth chords that sound like yearning or reflecting. But this song is by no means slow or boring. The drum gives it a pulse that is impossible not to dance to, much like most of this album.

Another single that has already been released to the public comes on track eight, “Lost in Yesterday.” This song might be the best of the four singles. The bass line is nearly as catchy and infectious as “The Less I Know The Better” from Tame Impala’s third album, yet it does not feel too similar in sound and is still uniquely its own. This track also features creative flanger guitar effects that are used just sparingly enough that it works like a charm.

As “The Slow Rush,” comes to a close, Parker guides us into the final track with a brief interlude just before it. Just over two minutes, the shortest song on the album is Track 11, “Glimmer,” which begins with someone speaking before diving into an instrumental pool of synth and bass overtop of a dancey-club beat.

This leads nicely into the longest song on the album, the final track, “One More Hour,” which is what all the fans at the listening party were begging for when it came to an end.

This song has so many moving parts and so many distinctly different moments throughout. Much like the song “Let it Happen” from the most recent album “Currents,” this song deserves to be seven minutes and 13 seconds. It does not drag on at all.

One of the strongest parts of the album as a whole, besides the unmatched production value and the obvious strong vocal talent of Parker, is the drum fills.

Tame Impala has always been known for good beats and bass lines, but there’s something about the drum fills on this album that sounds better than ever. It’s pretty clear that Tame Impala fans will be getting one heck of a Valentine’s Day present this Friday.