Records fall as Marquette dominates in trio of meets 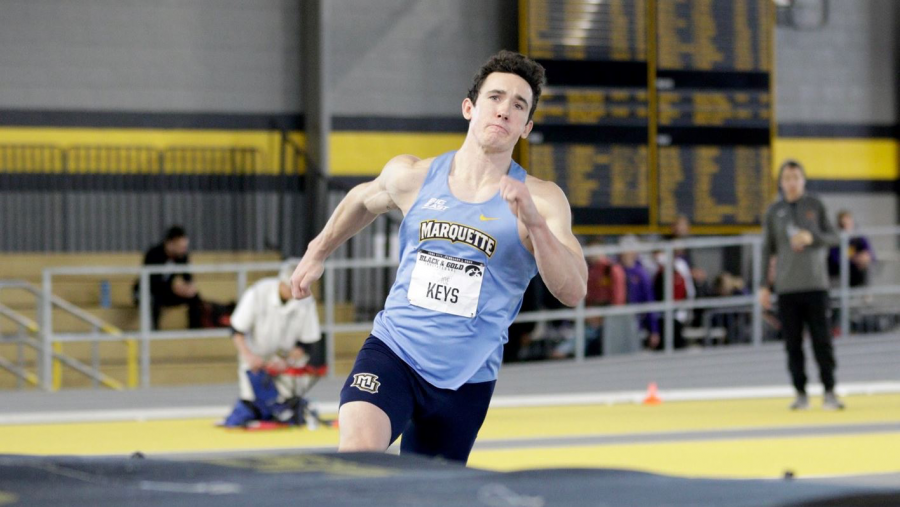 Joe Keys broke his former record in the heptathlon by 300 points at the Windy City Rumble. (Photo courtesy of Marquette Athletics.)

Marquette University track and field athletes took part in several different meets over the weekend at the University of Chicago, Notre Dame and UW-Parkside, which included some record-breaking performances from seniors Madison Marko and Daniel Pederson and junior Joe Keys.

Keys broke his own school record in the heptathlon, finishing with a program record 5,667 points at the Windy City Rumble, beating his former personal record by 329 points. His performance this weekend ranks him No. 7 nationally this season in the heptathlon. He also set personal records in all four of the events he competed in Friday, including the 60-meter dash, long jump, shot put and high jump. Keys’ record-setting performance this weekend puts him in a position to potentially qualify for the NCAA Indoor Championships in March.

Werven finished fourth overall in his first-ever heptathlon at the Windy City Rumble and now ranks No. 9 all-time in Marquette history with a score of 4,322 points. The first-year finished third in the 60-meter dash, fifth in the long jump, fourth in the shot put and third in the high jump.

“Seeing what our kids could do in the heptathlon this weekend was awesome to see,” head coach Bert Rogers said in a statement. “To have Joe break his own school record and Simon make the top-10-all-time in his first heptathlon was outstanding.”

Distance runners on the men’s and women’s sides competed in the 5,000-meter races at the Meyo Invitational at Notre Dame Friday.

The Golden Eagles’ distance team was led by senior Daniel Pederson, who took home a third-place finish with a time of 14:30.85, improving his PR by .03 seconds. Pederson remains at No. 4 all-time in program history for the 5,0000-meter race.

Sophomore Kendall Pfrimmer led the way for the women’s team, setting a PR of 17:39.08 on her way to a ninth-place finish.

The Golden Eagles took home 11 titles — seven from the women and four from the men — from Saturday’s Parkside Classic.

In total, three different first-year athletes posted PRs and won their individual events, including Payton Hanselman in the 55-meter dash, Mitchell VanVooren in the 55-meter hurdles and Imari Hurte, who won the long jump.

“We got to see multiple PRs, a couple of top-10 marks and overall improvements across the board. We also held a couple of people out who should be back in action here soon,” Rogers said. “I’m excited to have everyone get back to work this week at practice.”

Marquette will look to build off these successful indoor performances with both the men’s and women’s teams traveling to Michigan to compete against Grand Valley State University Feb. 14.