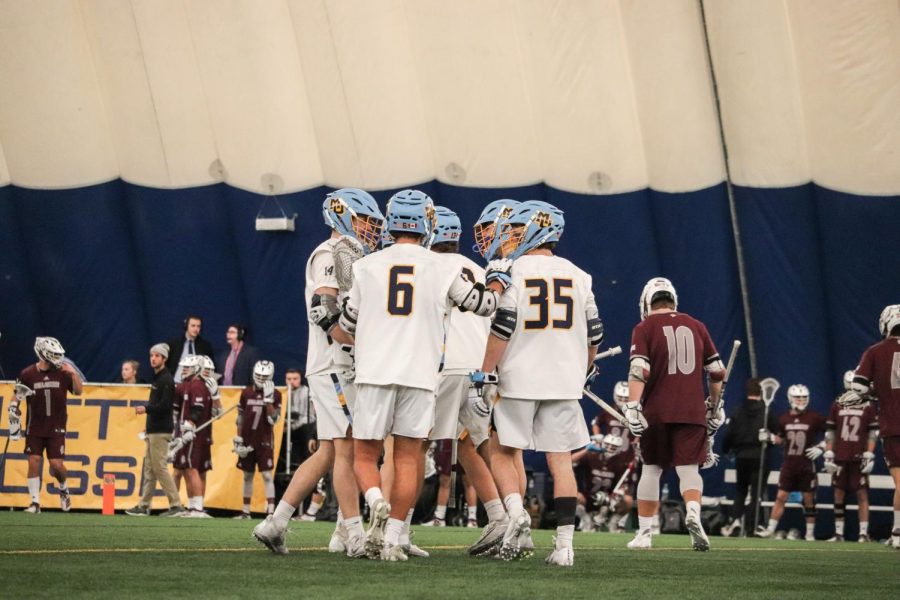 Marquette men’s lacrosse picked up a victory in their home opener Saturday, taking down the Bellarmine Knights 11-10.

“We’re really excited to be 2-0,” head coach Andrew Stimmel said. “I was proud of how they responded and made a couple stops to pull out the win there at the end.”

It was a tale of two halves for MU, as the Golden Eagles took a huge lead into halftime but was outscored 6-2 in the second half.

The first quarter was an onslaught by Marquette, scoring seven goals in the frame off the sticks of six different players.

“Guys were starting to play with confidence,” Stimmel said. “We were excited to play in front of the home crowd. We shared the ball really well, and did a great job at the faceoff X … That’s our 15 minutes that we’re looking (to sustain) for 60 (minutes).”

Marquette’s pace slowed down in the second quarter, as the Knights tallied four goals compared to MU’s two in the period, but the Golden Eagles carried a 9-4 lead into halftime.

“We had a couple unfortunate penalties in that second quarter that slowed our momentum,” Stimmel said. “We stopped winning faceoffs and gave up a couple goals before the half, and it put us on our heels a little bit.”

The third quarter started out on a strong note, as an early penalty by the Knights led to an extra-man goal by MU senior midfielder Connor McClelland.

Despite the large deficit, Bellarmine continued to work their way back into the game, tallying four straight goals down the stretch to bring the score to 11-10 with 46 seconds remaining.

Marquette lost the ensuing faceoff after a long scrap for a ground ball, and junior long-stick midfielder Moey Lardy caused a turnover and kicked the ball away to put the game on ice.

“In the end, we grinded out a win, and that’s all we can be happy with right now,” McClelland said. “Everybody contributed in today’s game, it was a great team effort.”

McClelland led the way for Marquette with four goals and two assists.

“I’m not surprised at all (by Connor’s performance),” Stimmel said. “He’s been steady for us in practice, throughout the preseason and every game we’ve had. He just does what he does every day.”

“All the guys around on offense were feeding the ball,” McClelland said. “Everybody was working really well together, lot of ball movement, lot of communication, and that’s exactly what we’re going after on offense.”

Junior John Hulsman made five saves between the pipes, and Washington along with senior Jared Hershman went a combined 12-for-23 at the X. First-year defensemen Mason Woodward caused three turnovers.

Marquette (2-0) remains at home for another week, taking on Jacksonville Saturday at Valley Fields. The first faceoff is set for noon Central.