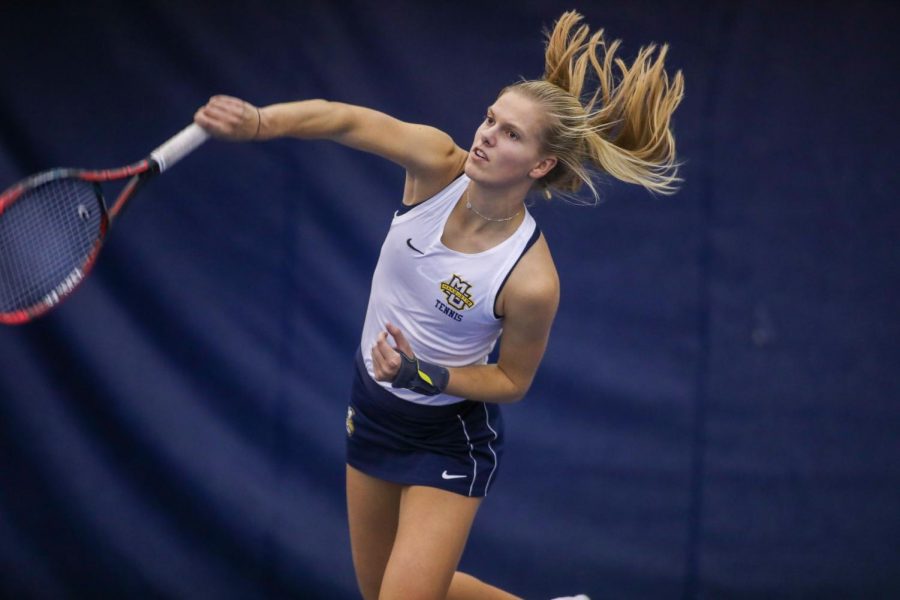 “Whenever we play, they often have live videos,” Eggink said. “Even when it is really late for them, they always stay up to watch it.”

Eggink said her parents, Arjo and Monika, are always supportive and willing to help her become the best tennis player she can be. She said this comes from her parents’ own passion for sports.

“My dad was a really good swimmer, and my mom was a really good volleyball player, so they have always had the competitiveness in them,” Eggink said. “Once I started playing tennis, they noticed that I really liked it and that I had talent, so they really supported me in helping me pursue something that I love doing.”

However, it wasn’t always easy for her family to support her financially.

Eggink noted how costly the practices and special equipment were. However, that did not stop her parents from putting her in the best position possible to succeed.

“My parents had a normal income (in the Netherlands),” said Eggink. “Every month, they spent a lot for me because they supported and they wanted to help me as much as they could.”

Despite the great amount of support Eggink received for tennis, the sport was not the only activity she was involved in. She was also a volleyball player, but eventually, it came to a point where she had to choose between the two, and she chose tennis.

“She likes it, but she isn’t as competitive as I am,” Eggink said. “She dances and sings … she has a lot of other talents that I do not have.”

Outside of her immediate family, Eggink credits her tennis success to her longtime coach in the Netherlands, Frans Wouters.

Eggink said she has worked with Wouters for over 10 years and still trains with him whenever she returns home.

“He is a really nice coach and wants to help you the best way that he can,” Eggink said. “Before I came (to Marquette), he has always been my coach, so he knows me really well, and we get along well.”

Being her long-term coach, Eggink explained how Wouters’s coaching style has had a positive impact on her game.

“He’s tough, and he tells you what he thinks when he absolutely wants the best for you,” Eggink said. “He wants to get the best out of you and is going to help you in any way possible.”

Being away from the people who helped shape her into the player she is today, Eggink said she tries her best to contact close family and friends back at home. The demanding schedule of collegiate sports can make contacting family and friends difficult at times.

“I try to (contact them) at least once every two weeks,” Eggink said. “Sometimes I am really busy and it is a lot harder to (talk with them) because of the time difference. When it is morning here, it is already afternoon there. … They are on the other side of the world, so they are really interested in what I am doing.”

With the 2019-20 season being her last at Marquette, Eggink has her eyes on helping the team win and leaving her mark on the program.

“Back home, (tennis) was a little more of an individual game, but here you come in as a team and work as a team,” Eggink said. “It is so important to give your best effort. You do not only want to make yourself better but (your team) better, too. Now, I see how people younger than me are looking up to me, so whatever I do is not only for myself but for a bigger purpose.”