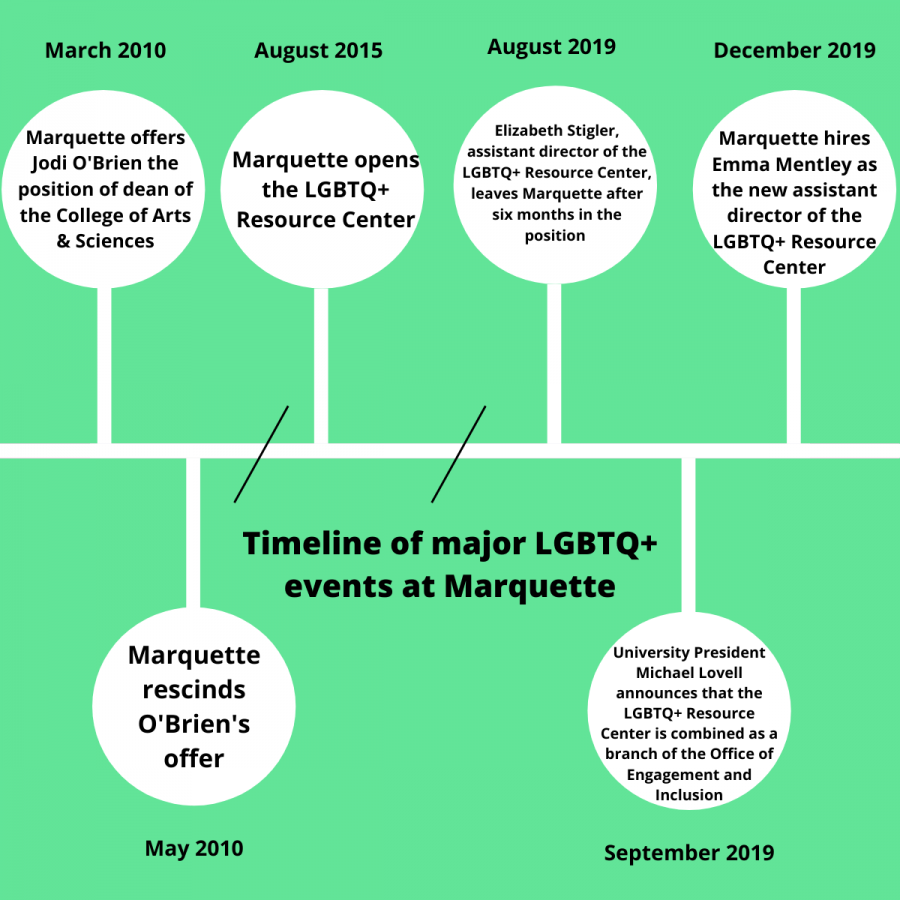 “I was blindsided by it,” Jodi O’Brien, a lesbian professor currently at Seattle University, said. “I think I had been open to entertaining the possibility of being a dean at Marquette primarily because everyone had been so welcoming and helping.”

Marquette rescinded an offer to O’Brien to be the dean of the College of Arts & Sciences May 6, 2010.

According to a story published in a 2010 issue of the Marquette Tribune, former university president Rev. Robert A. Wild said the decision to hire O’Brien “was made prematurely without ‘as much due diligence as was called for.’”

However, O’Brien said in a phone interview that she was completely caught off guard by the decision and that her hire had been discussed for months.

At the time, some faculty and other members of the Marquette community said they believed O’Brien’s sexual orientation led to the reversal of her deanship. However, Marquette said the decision to revoke the offer was because O’Brien lacked “the ability to represent the Marquette mission and identity,” according to a 2010 New York Times article.

“We found some strongly negative statements about marriage and family,” Wild said of O’Brien’s academic writings in the 2010 article.

Current Marquette students may not be familiar with O’Brien’s story, yet ten years later, concerns within the LGBTQ+ community on campus persist.

The announcement was a part of the cost-saving plan by Marquette to adjust to projected lower enrollment beginning in 2026, which included the firing of 24 staff members across the university.

Matthew Serafin, a former LGBTQ+ Resource Center program assistant and graduate of the Class of 2017, said that as a gay man, the university’s decision to combine the offices represents a lack of prioritization and understanding of the community’s need.

“I feel like it’s a little sad that we feel like we still need to make our case, we being (the LGBTQ+) community on campus,” Serafin said. “Especially after making so many strides after the university has made many missteps in the past.”

Demetria Anderson, director of the OEI, said that students can be reassured that day-to-day operations within the LGBTQ+ Resource Center will not be affected. In November, Anderson said that each organization within the OEI umbrella has access and support of six full-time staff members, seven graduate assistants, two office associates and 20 student staff members.

Despite the university’s reassurance, many students and other members of the Marquette community still felt the actions were a step in the wrong direction.

Nick Ansay, a senior in the College of Arts & Sciences who identifies as LGBTQ+, said the university’s decision to combine the departments felt like a stab in the back.

“I always say actions speak louder than words, but I can tell at Marquette that’s not true because they’re cutting funding we don’t have,” Ansay said.

In light of the recent changes, O’Brien said she understood the budget choices that go into the ever-changing modern college environment. However, she said the way universities go about doing so creates a different problem.

“University organizational structure sometimes makes (budget decisions) expedient,” O’Brien said. “When you have student services that are historically marginalized and minoritized alongside student services for well-entrenched traditional educational practices like a Greek system, why waste my breath?”

Serafin said one of his most important tasks while he worked at the center was to simply be present in the space and to connect students to the proper resources. He said he believes the decision to combine the departments was not done with malicious intent, yet it still hurts the center’s ability to impact others.

“When the (center) has dedicated funding and programming, I don’t care how many (students) show up,” Serafin said. “Part of the point of the resource center is to be visible and so that a student who maybe is too scared to come out at least knows that there are people on campus and a place where they can go.”

While students like Serafin recognize the importance of highlighting the center, some feel that the sentiment isn’t shared by every member of the Marquette community.

Ansay originally transferred to Marquette two-and-a-half years ago after facing discrimination from the small student population of 4,500 at High Point University in North Carolina. However, he said he feels there is more noticeable negativity toward the LGBTQ+ community at Marquette.

“I didn’t feel that the Marquette campus was very welcoming to me,” Ansay said.

“I’ll be sitting in the center, and you could count on your hand out of 15 student tours which ones are pointing out this center,” Ansay said.

Jennifer Perdomo, graduate assistant at the LGBTQ+ Resource Center, said the center has an open-door policy and provides total access to activities and resources, such as free printing, peer support and discussion groups, as well as community event days.

“It is very important for our students to have this space to decompress after a long day and feel accepted as you are,” Perdomo said. “It helps to build community, especially when new to MU and its campus climate.”

Anderson said she sees the university as being highly supportive of the LGBTQ+ community, most evident in its recent and upcoming program planning efforts.

“I do believe and offer that institutionally — and certainly within the OEI — we are continuing to make certain that we are operating with transparency and open communication,” Anderson said in an email.

In October 2010, Ronni Sanlo, former director of the UCLA LGBTQ Center, visited Marquette to conduct a climate report of Marquette.

“It will take a commitment from all parties at Marquette University to create the safe, welcoming, nurturing institution that it wants to project and must provide,” Sanlo wrote in her report. “It will take a great deal of transparency and open communication as well as a certain amount of mediation for this to happen.”

In the case of O’Brien, she said she was confused with the communication she received from university officials in regards to her rescindment.

In the academic journal Social Philosophy Today, O’Brien wrote that in March 2010, an offer for the dean of the College of Arts & Sciences was extended to her in the form of a written contract signed by the provost after a two-year process involving two search committees.

“The following week I flew to Milwaukee to negotiate the terms of the contract,” O’Brien wrote. “The provost’s office arranged for me and my family to tour local ‘gay-friendly’ neighborhoods, dine with select faculty and their spouses and meet with a real estate agent.”

When she received the news that her offer was rescinded from then president of the university, Rev. Robert A. Wild, she was stunned.  O’Brien said she went into the decision to become the dean with the intent that she would be a bridge to diverse communities and was used to dealing with the social flack.

“What I was struck most within the conversation was (Wild’s) own lack of conviction in the action he was taking, combined with simultaneous resoluteness that the action must be taken,” O’Brien wrote.

Desiree Valentine, an assistant professor of philosophy, said it was a deep disappointment to witness this controversy when she was a senior at Marquette in 2010.

Valentine was part of a group of about 100 Marquette students that protested the decision to rescind O’Brien’s deanship in 2010, carrying signs and demanding an apology to all the groups affected by the decision.

“I was motivated by a sense that a grave injustice had been committed against multiple parties, including O’Brien of course, but also students, faculty, staff and alumni,” Valentine said.

As a result of her deanship being rescinded, O’Brien said she felt support from many people almost immediately.

“I received over 400 very, very positive apologetic emails and letters from Marquette faculty, students and alumni expressing their disappointment in the decision,” O’Brien said. “The consequences are clear to me that that hire falling through was not so much about me specifically or harm to me as it was hard for the community that had endeavored to hire a dean they felt would best represent them going into the future.”

For alumni like Serafin, the university can live out its ideals by taking a chance to sincerely listen to students.

“By not responding, not acknowledging students’ concerns, it can come off as refusal to listen when that may not be the case,” Serafin said. “I think what Marquette can do is have focus groups, be public that they want to hear from students, and have (LGBTQ+ events) where there aren’t so many photographs taken.”

O’Brien said it takes a lot of courage, contemplation and critical reflection to engage with people and programs that are different from your beliefs.

“It enables students to become more articulate and to move beyond the kind of stale debate of ‘Should we have LGBTQ recognition?'” O’Brien said. “We need to move beyond and move into considerations of how to have complexity in how to carry through our values.”

Ansay said the importance of the LGBTQ+ Resource Center is to make people feel welcome, have an open campus and have difficult conversations that start a dialogue.

“The only reason why I got involved in the LGBT community here at Marquette was because of the center,” Ansay said. “This is the only reason. If this wasn’t here, I wouldn’t have gotten involved.”

Editor’s note: Matthew Serafin previously worked for the Marquette Wire. Serafin did not play any role in the reporting or editing of this story.

This article was written by Joseph Beaird. He can be reached at joseph.beaird@marquette.edu.