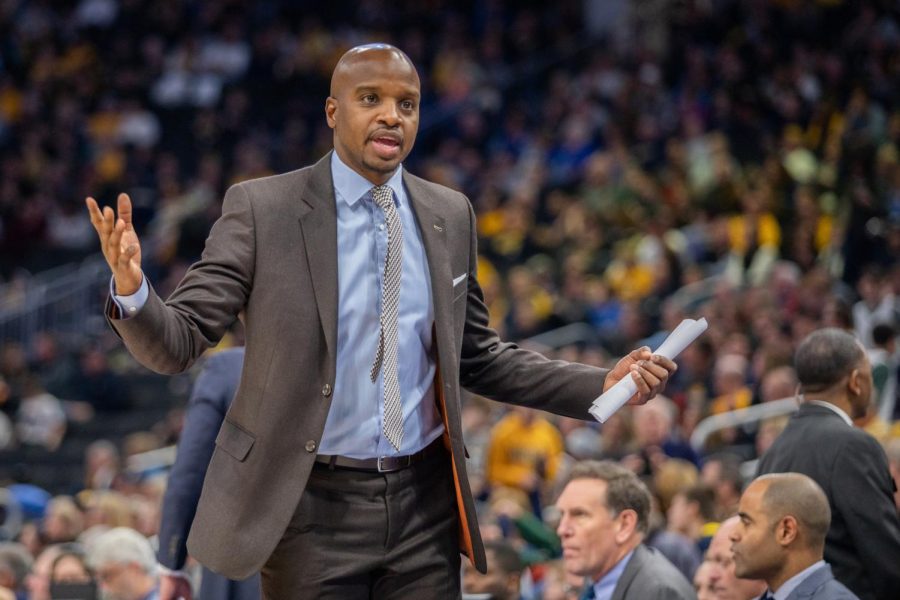 Dwayne Killings stands court-side in Marquette's 106-54 win over the University of Central Arkansas on Dec. 28.

“He’s a terrific connector in so many ways,” said Fran Dunphy, who retired in 2019 after 13 seasons as head coach at Temple University and 51 seasons involved in Philadelphia basketball. “Not only in the recruiting process, which is always helpful. … It’s invaluable.”

One doesn’t have to look far to see those connections on display in Killings’ second season on Fiserv Forum’s sidelines.

When Killings arrived at Marquette from the University of Connecticut, he carried with him his connection with then-recruit and current Golden Eagle guard Symir Torrence.

Torrence told the Marquette Wire shortly after committing to MU that he has “kind of a big brother, little brother relationship” with Killings.

“He texts me all the time just checking up on me,” Torrence said in January. “He just stuck with me through the whole thing, so that’s why I appreciate him.”

Killings’ connections in college basketball helped him quickly land the Marquette position in 2018 after two seasons at UConn. He was out of a job after UConn fired then-head coach Kevin Ollie after a losing season and a pending NCAA investigation.

“Dwayne had a tremendous reputation throughout the industry,” Marquette head coach Steve Wojciechowski said. “When you’re in interview processes, you’re trying to get to know somebody not just based on what their reputation is as a basketball coach or recruiter. You get to know them as a person to make sure they fit your culture and your needs, and he’s done that exceedingly well.”

Killings said the decision to join Wojciechowski’s staff at Marquette was “a no-brainer.”

“When I got here on campus, it felt like home,” Killings said. “I could see myself here. It’s a great place to sell.”

Wojciechowski credited Killings for “getting us in some great doors” with Torrence and Justin Lewis. Lewis committed in November.

“Coach Killings’ geographic reach extends throughout that northeast region, from New England to the (Washington, D.C., area),” said Adam Finkelstein, a recruiting analyst for ESPN focused on the Northeast. “Marquette has already kind of reaped the rewards from that.”

Killings almost secured a commitment from R.J. Davis, the 39th-highest-ranked player in ESPN’s recruiting rankings. Davis took one of his four official visits to Marquette before ultimately committing to Hall of Fame coach Roy Williams at the University of North Carolina.

“No assistant coach did a better job of recruiting him than Dwayne Killings did,” Finkelstein said. “At the end of the day … he committed to a brand and not an assistant coach.”

“He does it in the most sincere way,” Johnson said. “Everywhere I go, people stop me, and they want to talk about Coach Killings, or they have something great to say about him.”

“Some people in that line of work can come across as a little disingenuous at times,” Finkelstein said. “D.K. is the antithesis of that.”

Those connections also helped Killings land a two-year term on the NCAA Ethics Coalition in 2018.

The opportunity came after attending the NCAA’s Champions Forum for Basketball, a professional development workshop for assistant coaches. The conference connects coaches with athletic directors and members of search firms.

Killings is the only assistant coach in the country on the Ethics Coalition, which includes current and former head coaches from across the nation. One athletic director and one representative from the National Association of Basketball Coaches are also on the coalition.

As a member of the Ethics Coalition, Killings said he focuses on “what’s best for the kids.”

“I think sometimes, we forget they’re kids,” Killings said. “The business is really, really big, but what can we do a better job of for our student-athletes on the ground in terms of developing as people? What about the life skills?”

Wojciechowski said he appreciates having someone on staff on the coalition.

“You can get good information,” Wojciechowski said. “You know what’s going on, what to expect. You can see around corners. That’s just one example of the many connections that Dwayne brings to our program.”

Killings didn’t necessarily take the most conventional route to Marquette’s campus. After graduating from Hampton University in 2003, he spent time in the NBA as a video coordinator in Charlotte before transitioning into player development.

From there, he joined Temple University’s staff as the assistant director of basketball operations.

“We were really looking for a video person, and Dwayne had that experience already,” Dunphy said. “Once he got to us, you could just see he was not one-dimensional. He had every aspect of what we were looking for.”

After spending three years working on Broad Street, he moved back to the NBA D-League to oversee player development programs.

Killings made quite the impression on Dunphy in those three seasons. When the veteran coach needed an assistant in 2011, he turned to the guy who accepted his first assistant coach position at Boston University a year earlier.

“He seemed to have a sense of what the student-athlete was going through,” Dunphy said. “Whether it be a personal issue, an academic issue, a family issue — whatever it happens to be — he really delved into it and really wanted to help the kid.”

Just like Killings’ decision to join Marquette’s staff, Dunphy said the decision to hire Killings again was a “no-brainer.”

Dunphy said Killings’ experience as a coach in the NBA adds credibility to his message to student-athletes.

He helped Temple recruit the 38th-ranked recruiting class in the country in 2015 while finding what Finkelstein described as “late-blooming, under-the-radar guys.”

Killings spearheaded the recruitment of Quenton DeCosey, whom ESPN gave two stars on a five-star scale. He went on to earn unanimous First Team All-American Athletic Conference honors and a professional career in Italy, Greece and the NBA G-League.

Killings still regularly checks in with Dunphy. When Marquette goes to Villanova Feb. 12, Dunphy said he won’t “push the envelope” for a ticket request, but would enjoy seeing MU’s shootaround.

Dunphy, now retired, sees the connector he hired in 2006 and again in 2011 as a future head coach.

“It’s just a matter of time at this point,” Dunphy said. “The opportunity will present itself very soon, my sense is.”

Finkelstein said Killings’ strength as a “versatile communicator” especially prepares him for a head coaching position “sooner rather than later.”

“I wouldn’t expect him to jump and leave at the first job opportunity he has,” Finkelstein said. “I’d expect him to be very strategic and deliberate. … He’s going to be a candidate for head coaching opportunities every year.”

In the meantime, Killings said he’s having plenty of fun on Marquette’s staff.

“In all this, we’re having a great time doing it,” Killings said. “We all really enjoy being around each other. … It’s easy to get up in the morning early for workouts or jump on the plane or go drive and see the kids.”

This is the second part of a three-part series profiling Marquette’s assistant coaches. Click here to read the first part of the series on associate head coach Stan Johnson.

This article was written by John Steppe. He can be reached at john.steppe@marquette.edu or on Twitter @JSteppe1.