University looking into amount of AEDs on Campus 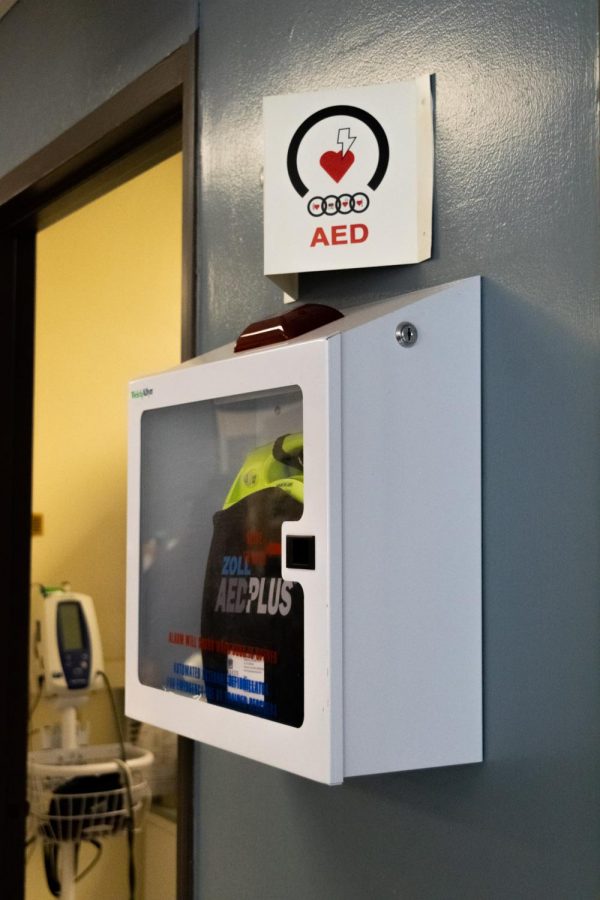 Marquette has 36 AEDs in various locations across campus.

Marquette has 60 buildings and 36 AEDs in various campus locations.

Although there is no law concerning the amount of AEDs colleges and universities in Wisconsin should have, EMS Safety Services recommends AEDs be placed where there is high population density.

The only law Wisconsin has on AEDs is the requirement in schools that operate between grades 7-12 to provide instruction regarding “cardiopulmonary resuscitation and cardio cerebral resuscitation” in health classes using a nationally recognized program, according to Wisconsin state statute 118.076. There is no national law regarding AED requirements in schools.

University spokesperson Chris Stolarski said he would not characterize Marquette as having a lack of AEDs on campus. With a total enrollment of roughly 11,800, Marquette has a single AED for every 328 students. For comparison, the University of Wisconsin-Milwaukee has 100 AEDs and 26,167 students, or one AED for every 262 students.

Stolarski said AEDs have been strategically placed across Marquette’s campus and that AEDs have been installed in buildings with greater likelihoods of seeing AED use, based on the building’s function or how densely populated the building is. Stolarski provided a list of AEDs on campus, which confirmed that there are AEDs in the following locations: the Al McGuire Center, the Athletic and Human Performance Research Center, Coughlin Hall, Cramer Hall, Straz Tower, the School of Dentistry, Eckstein Hall, Engineering Hall, Norris Park, the Gymnasium, Helfaer Recreation Center, the physician’s assistant program building, Schroeder Complex and the Soccer Pavilion/Valley Fields. Currently, there is no AED in the Alumni Memorial Union.

The university recently concluded an audit of AEDs on campus, Stolarski said.

“With respect to the AMU, the building has thus far relied on the proximity, response time and expertise of MUPD; however, as a result of the AED study completed last week, an AED will be purchased for the AMU,” Stolarski said in an email.

Stolarski said the Emergency Evacuation Maps in campus buildings identify the locations of AEDs and that MUPD carries an AED in the shift sergeant’s patrol car. He also said that the athletics department has several AEDs for use on the field.

Nolan Cox, a sophomore in the College of Nursing, said he feels comfortable knowing there is an AED in the main hallway of the nursing building where most traffic is seen. However, Cox also said that he is not sure how well-prepared the rest of the buildings are, as he hasn’t noticed AEDs in any other campus buildings.

Cox said he is not sure he could find an AED in a case where he would need to use one.

“I often think about what would happen if someone had a heart attack on campus, and it was my responsibility to treat them,” Cox said. “To be honest, I’m not sure if I would be able to find an AED fast enough for it to be useful.”

The presence of an AED is very important for emergency purposes, Cox said.

Cox said he feels there should be AEDs in all major buildings, such as the AMU and the library, and in the athletic buildings. The library was not included in Stolarski’s list.

Maggie Lyons, a junior in the College of Nursing, said she feels there should be more AEDs on campus and that they should be easier to find.

“The AEDs are accessible, but I feel as though the general student body doesn’t know where they are,” Lyons said.

Lyons said she thinks students who are trained to use an AED should be told at the beginning of each semester where the closest AED is and what to do in an emergency.

“Many students at Marquette are CPR-certified or even EMTs, so we should educate them in the event of an emergency,” Lyons said.

Lyons said she thinks that ideally, AEDs should be present in every building. If an individual were to go into an abnormal heart rhythm for some reason, an AED has the potential of shocking their heart back into a normal rhythm, saving their life.

“Medical emergencies happen, and it is necessary for the Marquette community to be prepared,” Lyons said. “AEDs, proper communication and adequate preparation are key when planning for possible emergencies.”

This story was written by Beck Salgado. He can be reached at [email protected]