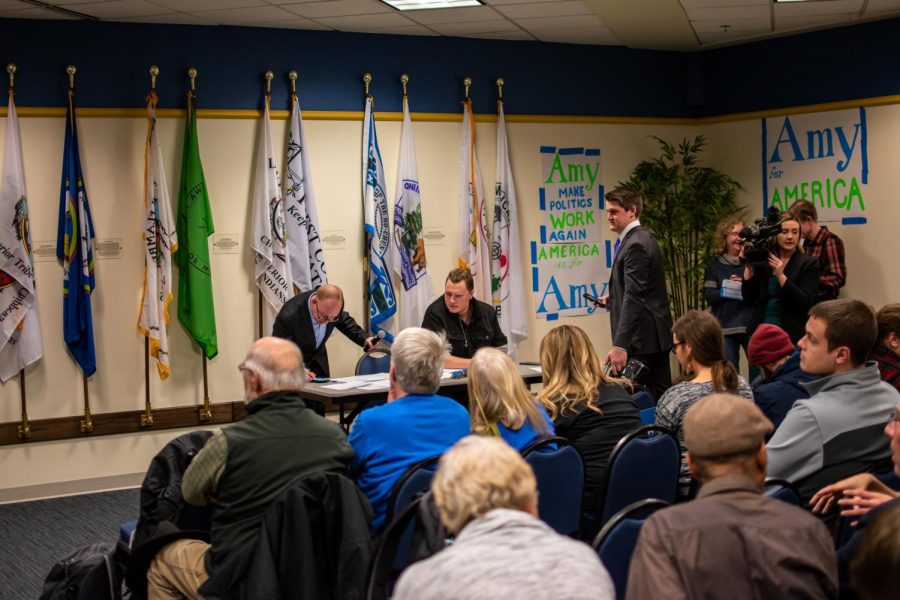 Marquette University made history Feb. 3 at 7 p.m. with the university’s first ever satellite Iowa caucus.

The event was held in Room 157 of the Alumni Memorial Union. This is the only location in the entire state of Wisconsin for Iowa voters to participate in the 2020 Democratic primary elections.

The Iowa caucus holds a unique historical tradition in American politics. A caucus is a convention of same-party voters who meet to vote for a candidate nomination or party policy, according to a video from the Washington Post. A caucus differs from ballot box voting, where an individual privately casts a vote during their state primary times.

A Democratic caucus has voters gather in groups and convince others to come to their group. Every candidate delegate gets a recorded head count as “votes.” The more delegations a candidate has over all the state precincts, the greater the chance that candidate will be chosen as the Democratic Party nominee. Since Iowa gets the first true vote of the year, it will play a role for undecided voters and allow Marquette students to become a part of new political processes on campus.

Eight attendees comprised of students and local community members were projected to participate in the caucus. However, the caucus was open to the public for anyone interested in watching. At the caucus, there were seven attendees, according to Wisconsin Public Radio.

One native Iowan, Hannah Lorenzen, a first-year in the College of Engineering, said the satellite Iowa caucus represents a future in getting young voters involved in politics and governmental matters. She said Marquette’s satellite caucus allowed her voice to matter in the primary elections, as Iowa does not have absentee ballots for caucus events.

“I was thinking about driving back down to Iowa, but I don’t have a car and couldn’t do that,” she said.

Lorenzen said she was pleased to hear that Marquette was able to host this event and designate a space for all registered Iowa voters.

“A political party campaign reached out to me with the opportunity. The Iowa Democratic Party was allowing satellite caucuses this year outside the normal times,” Rorholm said.

Now incentivized, the satellite caucus was closer to becoming reality.

The College Democrats needed one member to be available to arrange the event and one Iowan voter to petition to have the event. Maaz Ahmed, a sophomore in the College of Communication and a resident of Iowa, signed the petition.

The Iowa Democratic Party approved Marquette’s satellite caucus a month ago, passing the torch for the College Democrats and any involved individual to spread awareness about the caucus.

Reserving a space in the AMU after the approval was difficult, Rorholm said, but various Marquette faculty members like Kevin Conway, associate director of communication, collaborated with the College Democrats to provide controlled oversight during the reservation process.

“I am very grateful that Kevin Conway and his department could help us out, so that was really really cool,” Rorholm said.

Rorholm said this caucus will help form a political precedent on campus and will encourage more students to participate in primaries and in local politics.

Student voter turnout has steadily increased from 2014. In 2019, Forbes cited a National Study of Learning, Voting, Engagement about student voter data conducted by the Institute for Democracy and Higher Education at Tufts University.

As universities harbor and emphasize students to combine curriculum with civic activities, the rise of college voters will continue to rise, the Forbes article said.

“This caucus raises the profile even more about the political process and potential student involvement in democracy,” Nolette said.

Nolette expressed the importance of “having a commitment to civic engagement on campus and throughout Wisconsin and the country.”

The first ever satellite caucus is forward momentum on Marquette’s behalf to incentivize all Iowan voters and new voters in general that political individuals are a part of political societies that needs more representation and healthy discourse, Nolette said.