Camryn Taylor takes on her first season by ‘trusting the process’ 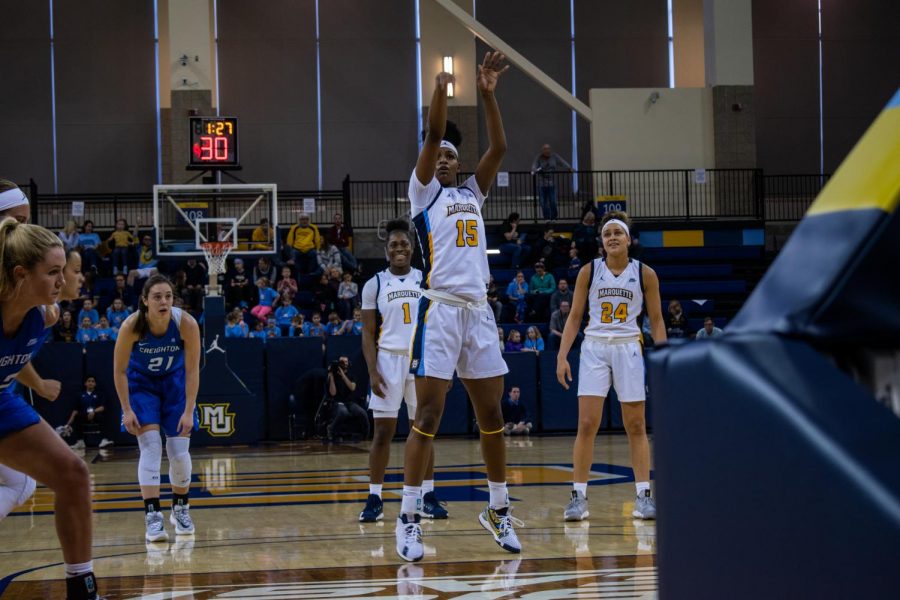 It’s not too often you hear Marquette women’s basketball head coach Megan Duffy compare one of her players to an NBA legend. When it comes to first-year forward Camryn Taylor, there’s an exception.

“(Taylor), in a respectful way, has a little bit of Kobe (Bryant) in her,” Duffy said. “On the court, she’s driven and she’s got that mean toughness. And then when she’s off the court, you see that smile and that person you want to be around.”

When Taylor was asked about what she thought of Duffy comparing her to Bryant and following his signature “Mamba Mentality,” she said, “I love it.”

“My mentality is to just get better and improve on everything,” Taylor said. “Improve our team unity, improve in practice, improve on my shot, improve on layups, everything I want to improve and get better on. With Kobe, I think that was his mentality too with his routine of being consistent and being competitive.”

“She’s so serious on the court, and then you see her boppin’ down the street and she’s like, ‘Hey coach, what’s up!'” Duffy said. “We’re actually trying to get that more bubbly side on the court.”

One thing Duffy said she believes Taylor can improve on is her 3-point game.

“We’ve seen her hit some jumpers,” Duffy said. “But at some point when she gets more comfortable and knows our offense. … In a lot of ways you’re going to see her versatility being able to stretch defenses.”

Duffy touted Taylor’s work ethic off the court and her willingness to learn.

“She has this saying for herself: ‘Just trust the process,'” Duffy said. “She tells me, ‘Coach, I write everything down (while watching) film, and I’m trying to study it as much as I’m studying for school,’ which is cool to see. All this work that she’s putting in, it’s eventually going to click.”

The transition from the high school level to the Division I level can be an especially difficult one. For Taylor, the transition has seen its highs and lows.

“I don’t think she or any of the freshmen realized how hard it is your first year and how many ups and downs there are,” Duffy said. “She’s had some inconsistent moments.”

The Peoria, Illinois, native had an illustrious high school career. She earned four varsity letters, was a three-time Big 12 Scholar-Athlete and notched over 1,000 points in her time at Richwoods High School.

Perhaps the biggest difference between high school and college basketball is defense.

“The one thing (Taylor) works on every day is the defensive side of the ball,” Duffy said. “In high school, you don’t have to do much of that. They just want you to score.”

Taylor praised Duffy for always being there for her both on and off the court.

“Just coming in to talk about our days and how everything is going and just about life in general. … She cares about each and every one of us,” Taylor said. “Even though she might yell at me in practice and get on my butt, I know it’s for a reason.”

Despite the growing pains, Duffy raved about the flashes of brilliance Taylor has had on the court this season.

“When you focus on those great moments with her rebounding, her ability to score the basketball and her athleticism, she has a chance when it’s all said and done to be one of our top players,” Duffy said.

When Taylor committed to Marquette, Duffy said there were talks about how she could potentially become a professional basketball player someday.

“People can say that, but there’s a whole process to get yourself there,” Duffy said. “She’s well on her way in her first year to build a foundation with her work ethic, great attitude and skill set.”

Over her last four games, Taylor is shooting at a 56% clip.

With the recent emergence in Taylor’s play on the court, Duffy didn’t shy away from the possibility of her winning BIG EAST Freshman of the Year.

“She has a great shot to at least be on the BIG EAST All-Freshman team,” Duffy said. “Camryn’s upside is enormous right now.”