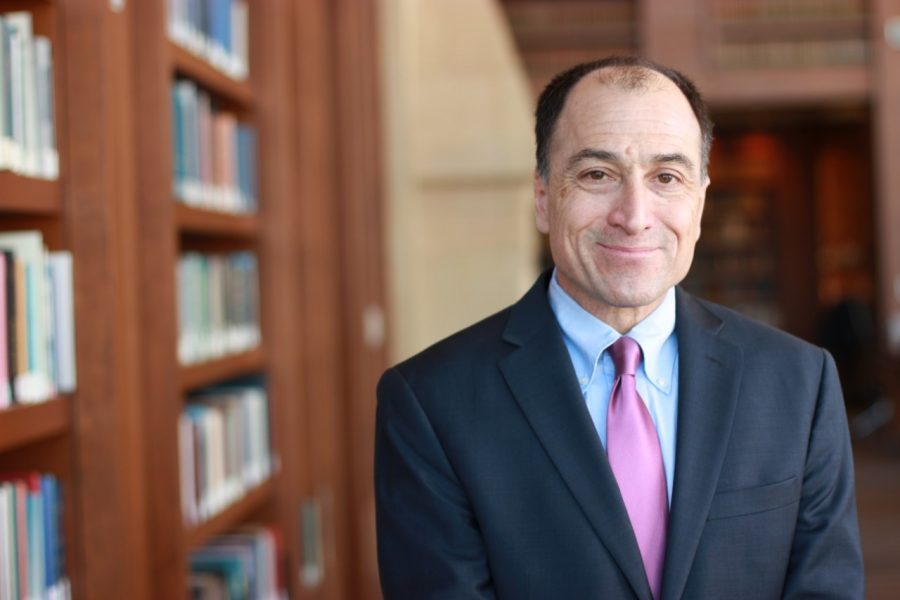 Ed Fallone has worked for the law school since 1992. Photo courtesy of Chelsea Cross

Marquette Law School professor Ed Fallone said he is looking to bring his law expertise and “an independent and nonpartisan voice” to the Wisconsin Supreme Court.

Fallone is running for state Supreme Court against incumbent Justice Daniel Kelly and Dane County Circuit Judge Jill Karofsky. According to the Associated Press, former Gov. Scott Walker appointed Kelly in 2016 and is part of the current 5-2 conservative majority in the court. A Feb. 18 primary will narrow the race to two candidates, and the election will be April 7. The candidate elected will have a 10-year term.

Fallone previously ran for state Supreme Court in 2013 but was unsuccessful. However, he said in the years since he has been approached by people telling him he should run again.

Steven Shea, Milwaukee County Supervisor for District 8, is one of Fallone’s endorsers.

Shea said he feels that Fallone is qualified for the position. Despite his loss in 2013, Shea said he thinks Fallone has a plan to win the 2020 election.

Shea said that while Fallone’s experience as a law professor has helped make him a qualified candidate, that expertise may not be beneficial in terms of winning.

“These races, like most races, are more dependent on who gets the most money and which side has the most emotion on its side rather than qualifications, because sometimes people who win aren’t the most qualified for the job,” Shea said. “But here’s hoping that his qualifications do make a difference.”

If elected, Fallone said he can bring a fresh independent voice.

“The voters are tired of a Supreme Court that seems divided on political lines, where the justices don’t seem to talk to each other,” Fallone said. “They want to keep politics out of our judicial elections, and they want to see someone on the court who has a different perspective — an expert on constitutional law and someone who’s fought for civil liberties.”

Fallone began teaching at Marquette Law School in 1992. He also has experience working with nonprofit organizations, serving as president of the Latino Community Center from 2000-03 and as chair of the steering committee for Catholic Charities Immigrant Legal Services from 2000-05. Fallone said the Latino Community Center worked to help Milwaukee’s at-risk youth and to “break the school-to-prison pipeline.” He said the Catholic Charities Immigrant Legal Services helped provide assistance to lawyers working with immigrants on deportation cases.

Having experience teaching law and working for immigrant and working-class families, Fallone said he would be able to bring diverse experience to the Wisconsin Supreme Court.

“The reason why diversity is important on the state’s highest court is that the justices decide cases that obviously the parties in front of them make arguments over which rules apply or what laws they should adopt,” Fallone said. “But it’s important that the justices have a personal history and a personal background that’s diverse so they understand what impact their ruling’s going to have on different communities.”

Fallone was the first of the candidates to announce that he was running. The announcement came in March, and he has been traveling around the state since.

“I always tell people if we can put it on Ed’s calendar, we will be there,” Cross said. “No group is too large or too small for Ed, because every vote matters.”

Cross said if elected, Fallone would continue that dedication to meeting with others while serving on the court outside of election season.

Cross is the daughter of one of Fallone’s former students, Danielle Shelton, a Marquette Law graduate from the Class of 2003 and the current Milwaukee County Circuit Court Judge. Cross worked on Shelton’s campaign and helped her get elected last year. She said Fallone invited her to manage his campaign because she helped her mother get elected with a similar message to voters: an offer of a “different choice” and someone that knows the working class people of Milwaukee.

Cross said her mother was the first black woman to be elected for Milwaukee County. If Fallone is elected to the state Supreme Court, he will be the first Latino to hold that position.

“We are one of 24 states with an all-white Supreme Court, and I think the public’s faith in justice is undermined when the only people of color are defendants or are in handcuffs,” Cross said. Some of these states are Nevada, Alabama, Alaska, Michigan, Pennslylvania, Indiana and Kentucky.

Cross said Fallone was one of three law professors in the country contacted by the Alliance for Justice and the Communications Department for the Obama administration when Obama’s nomination of Merrick Garland was obstructed in the Senate. She said Fallone was asked to offer insight on the issue.

“Working with Ed, he is probably one of the most humble candidates I have ever worked for,” Cross said.

“Being a judge is a lot about humility — not assuming you know everything. I always tell my law school class, ‘The more I learn, the less I know,’ when you talk about the Constitution,” Fallone said.

Joseph Kearney, dean of Marquette Law School, said he follows a policy of not endorsing candidates or discussing views of candidates.

Kearney said in an email statement that Fallone is “a longtime and valuable member of the Marquette Law School faculty” and that he has made arrangements for a partial leave for this semester.

“I have appreciated his availability to help us meet some of our teaching needs even during the campaign,” Kearney said about Fallone in the email.

Shea said that state supreme court races often have low voter turnout, but this year turnout is expected to be higher because presidential primaries will be held on the same day.

The primary selecting the final two candidates will be Feb. 18. The election will be held April 7.