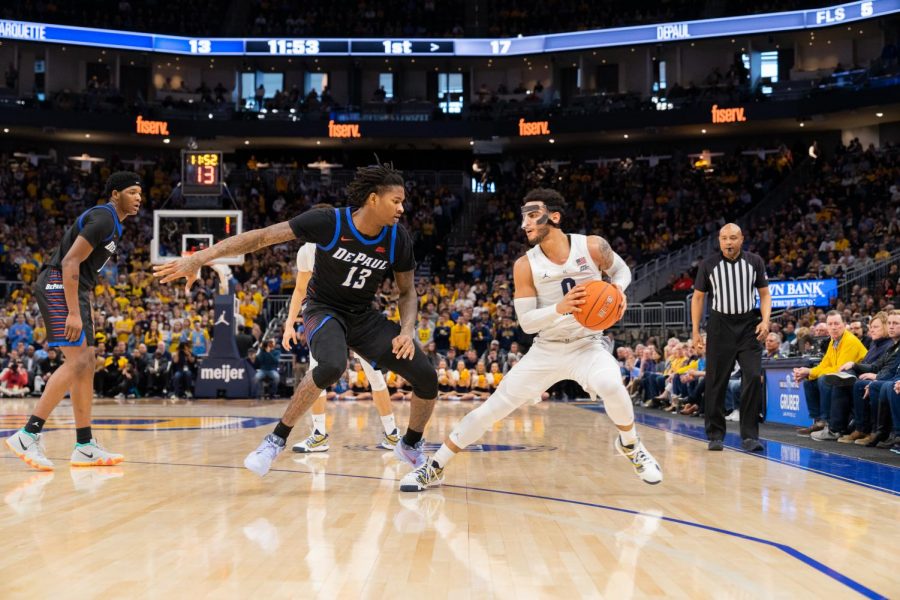 Markus Howard (0) steps back in Marquette's 76-72 win over DePaul at Fiserv Forum Saturday.

It was another stressful ending for Marquette as the Golden Eagles’ 42-point surge in the second half lifted them past their I-94 rivals, the DePaul Blue Demons, 76-72 at Fiserv Forum Saturday afternoon.

“Winning in the BIG EAST is incredibly hard and if you just take a snapshot of our league today, do you need any more proof of that?” Marquette head coach Steve Wojciechowski said. “DePaul in another league, Power Five league, Power Six league, they’re a no brainer NCAA Tournament team.”

This is the third consecutive game that has come down to the final moments for MU.

“One of things you have to do to consider yourself a really good team is do your best and play your best whatever that might entail when your best is needed,” DePaul head coach Dave Leitao. “Whether it’s our game today, Xavier game the other day or throughout the season, they have done that … because they have enough guys that have done it continuously.”

Prior to the game, Marquette recognized Kobe and Gianna Bryant, along with the seven other victims of last Sunday’s tragedy with a 24-second moment of silence.

“We got to honor the legacy of Kobe Bryant and his daughter Gigi and then all the other crash victims of that tragic event,” Wojciechowski said. “He’s such a cultural icon, especially to our players. Our players were really hurt by it. It’s unfortunate that so many times, we as people, it takes a tragedy to make you appreciate things you should appreciate.”

Despite the fracture in his nose from the Xavier game Wednesday, the first half was almost entirely Markus Howard. The nation’s leading scorer had 21 of the team’s 34 points heading into halftime.

While Howard shot 6-for-13 from the floor and 5-for-12 from 3-point range, the rest of his team went 5-for-15 from the field and 0-for-9 from beyond the arc. DePaul shot an impressive 57% in the first half and captured a 40-34 advantage heading into the break.

“Protecting the 3-point line is really important against them, but then you have to make plays,” Leitao said. “When we were up for most of the game that we (didn’t) do that. … We didn’t take the balanced shots we were supposed to.”

Not only was the 1970 National Invitation Tournament championship team celebrated for its 50th anniversary, but during halftime Marquette basketball alumnae Jae Crowder and Lazar Hayward were inducted with four others as part of the 2020 MU Club Hall of Fame class.

“Talk about two guys that embody what Marquette basketball’s about,” Wojciechowski said. “You’re talking about two of the best ever to play here. … I’m so happy for them to get that well-deserved honor.”

Crowder, the current Memphis Grizzlies forward, was the BIG EAST Player of the Year and All American in 2011-12 and scored over 1,000 points in two seasons. Meanwhile, Hayward is the only player with over 1,800 points and 900 rebounds and ranks third with 1,859 points. Hayward brought former guard David Cubillan as his guest.

“I hope they know that this is home for them and they’re part of our family, even though I didn’t coach any one of those three guys,” Wojciechowski said.

Following the break, MU came out hot and were outscoring DePaul 16-12 over the first eight minutes of the second half.

“Fortunately in the second half, we moved the ball a lot better,” Wojciechowski said. “We did not drive at all in the first half.”

The Blue Demons, though, were able to hold Howard to just 10 points in the second on 2-for-8 shooting.

“He’s really good first of all (a) tremendous scorer,” Leitao said. “When he has the ball or when he’s coming off screens, you have to try and maybe give him left options.”

Howard finished with a game-high 31 points, along with four assists and two rebounds.

“His numbers never reflect his true impact on the game because of what teams try to do to game plan for him,” Wojciechowski said.

Midway through the second half, when the Blue Demons were overcoming their shooting woes and led 61-56, Wojciechowski knew something had to change. DePaul ended with 36 points in the paint, 16 of them from junior guard Charlie Moore.

“We couldn’t keep Moore out of the paint because he’s really good. We were chasing him around and not doing a particularly good job at it,” Wojciechowski said. “Switching to zone helped us. We don’t do it often, but the times we have done it, it’s pretty effective.”

That zone defense helped the Golden Eagles claw back to tie the game at 66 at the 3:50 mark. From then on the teams were neck-and-neck until Marquette grabbed the 72-70 advantage with 1:22 remaining.

Huge defensive stops from graduate student Jayce Johnson and clutch free throws from Howard and Koby McEwen propelled MU to the win. MU finished with 42 points in the second half.

Moore led DePaul with 21 points on 8-for-17 shooting. Paul Reed, who fouled out with eight seconds remaining, added 14 points and a team-best seven rebounds. Besides Reed, four other Blue Demons ended in foul trouble.

Johnson was an impact player and in 19 minutes scored 11 points on 5-for-5 shooting and added six rebounds.  Twenty-one points came from MU’s bench.

“When our bench is really contributing like that, we’re a really hard team to beat,” Howard said. “Guys like Jayce, Jamal (Cain), (Symir Torrence), even having Greg (Elliott) back. … Just to have (Greg) back and playing and seeing the court has been great.”

McEwen, who played only three minutes in the first half, was able to play 16 minutes after the break contributing 13 points, a team-high nine rebounds and went 11-for-13 from the charity stripe.

“At the end of the game, when he walks to the line, you don’t see anything but wanting to be there,” Wojciechowski said. “He had, again, crucial shots for us. Having him play as much as he did in the second half … was a big factor in us winning.”

“When our backs are against the wall he’s one of those guys who has the willingness to fight,” Howard said. “He’ll always fight to the end. … He’s a guy who brings it night in and night out.”

Marquette (16-6, 6-4 BIG EAST) has over a week off until hosting the Butler Bulldogs Feb. 9 for National Marquette Day. Tipoff is slated for 11 a.m.

“Getting back to the basics in terms of offensive fundamentals and also defense. … We have to definitely get back to playing defense like we know how to play,” Howard said. “National Marquette Day, it’s something you really can’t explain. It’s truly one of those times of the year you always look forward to just because of how much the Marquette name means to people.”