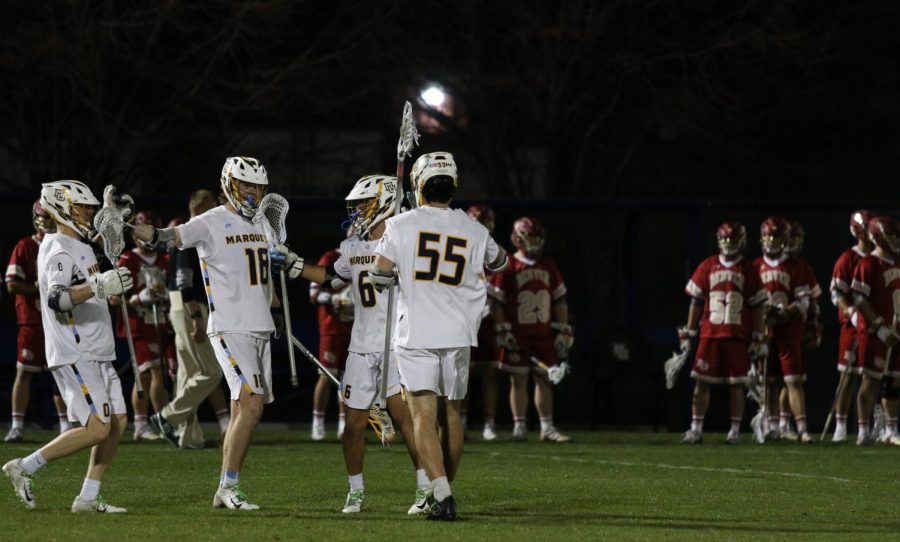 It was a wild end to the game, as Marquette first-year midfielder Chris Kirschner ended up being the hero in his first collegiate appearance.

Sophomore faceoff specialist Thomas Washington won the opening draw of overtime and MU began their clear. Cleveland State was attempting to execute a 10-man ride, the lacrosse equivalent of a full-court press, which leaves the net unmanned.

Kirschner received the pass and carried the ball over midfield, where he saw the open cage and fired one in for the game-winning goal.

It was the first game of a new era in Marquette men’s lacrosse, with head coach Andrew Stimmel obtaining the first win of his coaching career, and it was only fitting that a first-year player saved the day.

MU got out to a hot start in the first quarter, with senior midfielder Peter Henkhaus notching a goal on the first possession.

Junior Anthony Orsini added a tally later in the quarter and first-year Devon Cowan found the net in transition for the first goal of his collegiate career to give MU a 3-2 lead at the end of the first.

But in the second quarter, it was all Cleveland State. Marquette was outscored 4-0 in the period, going down 6-3 entering the halftime break.

The Golden Eagles started out the third quarter on a good note, with Kirschner scoring his first collegiate goal to put MU down 6-4.

Cleveland State then scored to extend their lead again, but back-to-back goals from sophomore Holden Patterson brought the Golden Eagles back within one at the end of the third quarter.

Cowan tied the score early in the fourth, but it took less than 30 seconds for the Vikings to take the lead again.

Marquette then took advantage of two transition opportunities to give themselves their first lead since the second quarter, the tying goal coming off the stick of Henkhaus and Cowan putting his squad up by one.

With 1:45 remaining in regulation, Cleveland State utilized an extra-man opportunity to tie the game at 9-9.

Marquette won the ensuing faceoff on a violation by CSU’s Danny Tesler and took a timeout to draw up a play.

Following the break, senior midfielder Connor McClelland found the ball in his crosse and beat Vikings’ goalkeeper Gareth Haigh to give his squad the lead.

Cowan totaled three goals and one assist in his first collegiate game, while Henkhaus, Kirschner and Patterson added two of their own.

Hulsman made 10 saves on the day and first-year defenseman Mason Woodward totaled eight ground balls and three caused turnovers on the day.

For Cleveland State, Tristan Hanna had a hat trick, while Stephen Masi and Ryan Haigh had a pair of goals. Gareth Heigh had six saves for the Vikings, and CSU’s two faceoff athletes went a combined 14-for-23 at the X.

Marquette (1-0) has their first home matchup of the season Saturday, facing Bellarmine University at Valley Fields at noon.

This article was written by Dan Avington. He can be reached be reached at daniel.avington@marquette.edu or on Twitter @danavington.