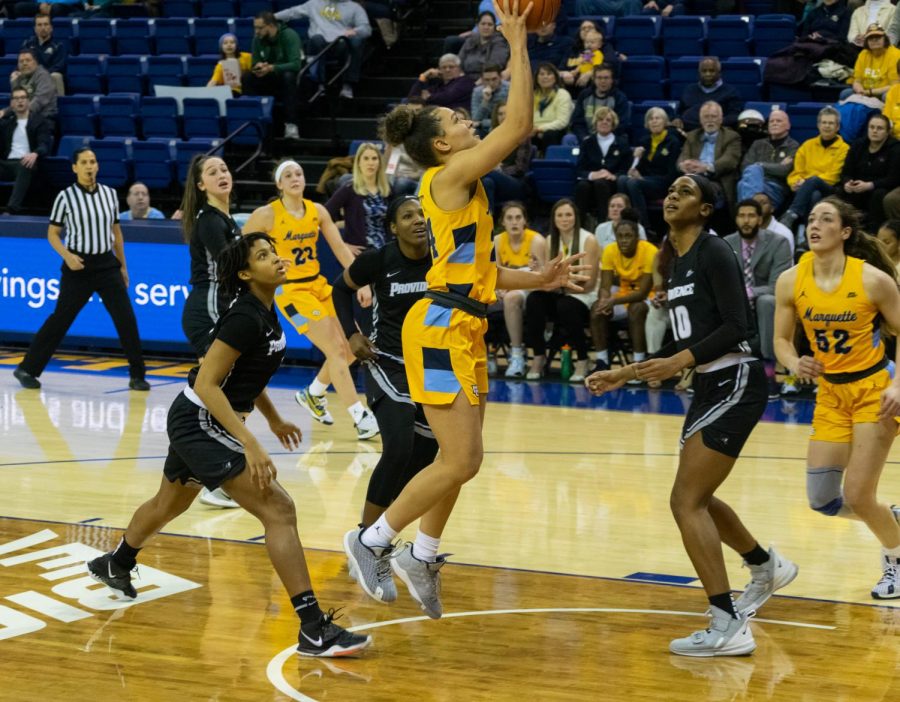 Marquette women’s basketball started the second half of BIG EAST play on a positive note with an 85-55 win over the Providence Friars Friday night at the Al McGuire Center.

“Really proud of our team effort after kind of a slow start in the first quarter,” head coach Megan Duffy said. “Thought we were really locked in defensively. Had some great possessions that led to some easy fast-break baskets.”

Prior to the start of the game, both teams met at center court for a 24-second moment of silence in memory of NBA star Kobe Bryant, his daughter Gianna and the other seven victims who died from Sunday’s tragedy.

“He was for sure my favorite player growing up,” junior guard Selena Lott said. “I always looked up to him. … I wear 24 for that reason.”

For Duffy, Bryant’s impact and legacy goes beyond the NBA circuit, it was what the type of player the five-time NBA champion was.

“We really talked about this week as a team how we continue to live out his legacy in our own way,” Duffy said. “Whether it is how committed we are, our competitiveness, doing the little bit extra.”

With the win, Marquette remains tied for second place in the BIG EAST with Butler. The Bulldogs defeated the Xavier Musketeers 63-61 on Friday night.

The first quarter featured continuous first-quarter struggles for the Golden Eagles. At the end of the quarter, Providence led 17-11 thanks to a 16-5 run over the last 5:43 of the quarter. MU shot just 15% from the field in the opening frame.

“We missed a few easy shots,” Duffy said. “The last couple of games it has taken us a while to settle in and I am not exactly sure what that is. I did like our response when we do get down.”

Marquette stormed out to a hot start in the second quarter and closed the first half with a 35-23 lead, holding Providence to just six points in the frame.

“Both teams were frazzled in the first quarter, it was scrappy,” Duffy said.”We changed pace from tempo to slow down, take good shots. We were getting stops and we just were smart on then what we were doing, who was getting the ball and slowing down a little bit which led to some good execution.”

The third quarter was not much different, with Marquette outscoring Providence 30-18 in the quarter. MU shot a game-best 80% from the field in the quarter topped off by Lott’s nine third-quarter points.

A 65-41 lead heading into the fourth quarter was enough for Duffy’s team to cruise their biggest point differential win of the season.

Lott led the team with 18 points, eight rebounds and put up five assists.

“She was just aggressive out there,” Duffy said. “To have 18 points and no turnovers is great.”

“We have to be a team that plays really hard and has a toughness within ourselves,” Duffy said. “Whether that is scoring in the paint on an offensive rebound, getting to the free-throw line or using our diversified post group in different ways. I like how we are able to win in different ways and that will help us stay in games.”

The Golden Eagles got 35 points from their bench tonight as well. First-year forward Camryn Taylor had 15 of the 35. It is the fourth time this season the Peoria, Illinois native finished in double-digit points.

For first-year guard Jordan King’s coach, six assists with no turnovers on the night proves why the Rockford, Illinois native was named the Preseason BIG EAST Freshman of the Year.

“It is great thing to see a freshman get their stride this point of the season,” Duffy said. “She was banged up a little bit earlier in the year but is now able to have that free range to get extra shots and work on her game. She controlled the tempo, created opportunities, really glad where she is at.”

It is King’s defense that has stood out to Duffy and for the first-year head coach, it is a credit to the relationship King has with Lott.

“They are very close, I am sure they are learning from each other,” Duffy said. “Jordan has some great leadership around her to give her confidence. If she can learn anything from Selena (Lott), Izzy (Spingola) or any of our upperclassman that is a great thing. She is in a great spot right now.”

Marquette (16-5, 7-3 BIG EAST) returns to the Al McGuire Center for a matchup against the Creighton Blue Jays on Sunday afternoon. Tip-off is scheduled for 2 p.m.

For Lott, the team that will step onto the court Sunday afternoon against the Blue Jays is not the same team that stepped onto the court at D.J. Sokol Arena on Jan. 3. The Troy, New York native, says the main thing is the team’s growth and recent success.

“Just sharing the ball. We all come together as one so unity is a huge thing for us, “Lott said. “Once one person lets go, it just shows and then when we are all together you can see and you can tell. ”