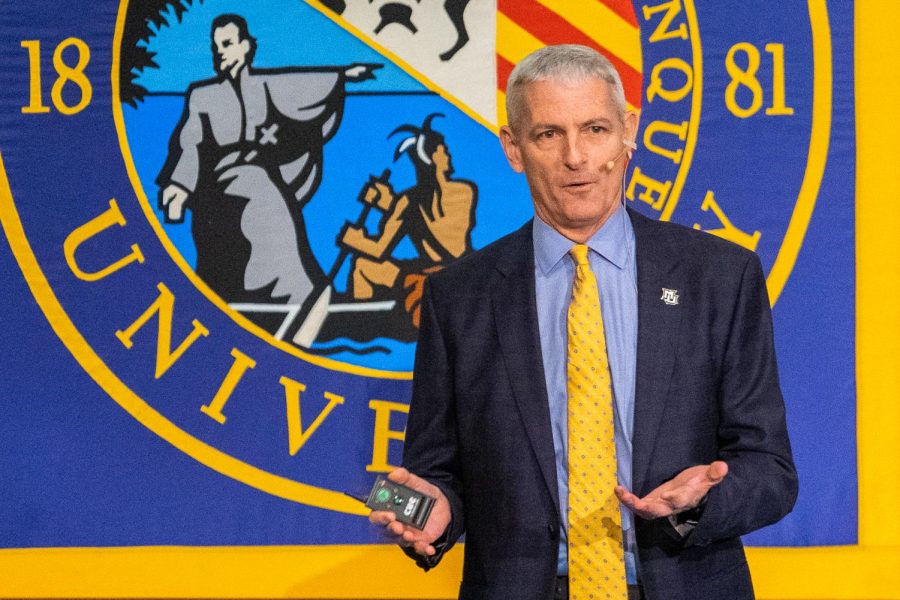 Lovell speaks at his sixth annual presidential address in the AMU.

The College of Business Administration is moving to the old McCormick Hall space on 16th Street and Wisconsin Avenue, University President Michael Lovell announced Wednesday to nearly 400 people in his sixth annual address at the Alumni Memorial Union.

The business school will replace an eventual green space created by the demolition of former residence hall McCormick, which finished in fall 2019. The current business school is in Straz Hall, located near 12th Street and Wisconsin Avenue. Lovell’s announcement came amid other plans, including those regarding challenges facing higher education. He also touched on topics of diversity and inclusion, mental health and wellness.

“We want to be the destination for business in Milwaukee, in this region,” Lovell said of the new College of Business Administration location. “This facility will help us do that.”

The building will cost $70 million in total, and Lovell said the university has raised $44 million so far. Twelve donations were more than $1 million.

Lovell said the space will be interdisciplinary and will incorporate other areas on campus, including the Excellence in Leadership program.

The move for a new location follows Lovell’s letter to Marquette community members in August, in which he said the university would look for cost management opportunities to prevent financial downfall in coming years. Lovell cited the book “Demographics and the Demand for Higher Education” by Nathan Grawe, in which the author predicts a 15-25% decline in college-age students starting in 2026. This decrease comes from fewer births after the 2008 economic recession.

In early September, the university laid off 2.5% of its employees after receiving cost management recommendations from deans, vice presidents and vice provosts.

“We want to be proactive and define who we are rather than have the forces dictate what we become,” Lovell said in his address, adding that he wants every part of campus to be involved.

Space Optimization consists of a study by Lora Strigens, vice president for planning and facilities management, which is going to focus on how the university will manage its 60 buildings on campus, Lovell said.

Operational Efficiencies planning is led by Ian Gonzalez, the vice president for finance, which will continue from now until April, with implementation planned to begin in May. Cost savings are anticipated to begin during the 2021 financial year.

The president then discussed diversity and inclusion on Marquette’s campus. He said the university currently has its most diverse student and faculty population in its history, with more than 28% students of color and more than 20% faculty of color.

Lovell said an increased population of color is just the first step, and from there the university has to ensure students and faculty feel welcomed and are able to succeed. He announced the implementation of a Campus Diversity Plan, led by William Welburn, vice president for inclusive excellence.

The plan aims to build an inclusive community, address financial challenges and look at hiring protocol, among other assets, Lovell said. He added that a campus climate survey will begin next month. The last survey was completed five years ago.

Lovell also discussed the Democratic National Convention, coming to Milwaukee July 13-16 at Fiserv Forum, and how Marquette will be involved in the historic event. Lovell said all residence halls will be “subscribed” for the convention. Event spaces at the university are also being marketed, and convention courses will be offered.

He said all revenue gained from the convention will go toward scholarships supporting diversity initiatives.

In the long term, he said the university wants to create one facility to serve health and wellness. He said the Space Optimization study will help figure out where this will be.

Lovell also recognized a variety of community members in his address. He began by discussing difference makers at Marquette.

“(A) difference maker is someone whose actions or initiatives make a significant impact on the lives of others and really goes above and beyond to really do something special,” Lovell said.

The first award was for Ready to Inspire Success and Excellence, an orientation program for multicultural and underrepresented students to provide resources to help adjustment to campus, according to Marquette’s website. Joya Crear, assistant vice president for student affairs, received the award.

Stacy Mitz, senior associate vice president of university advancement, received a Difference Maker award for her work fundraising for the Backpack Program. The program is a confidential service that provides groceries to students in need. Through McCormick’s demolition, nearly $90,000 was raised for the program, Lovell said.

Professors in Marquette’s Dental school, Pradeep Bhagavatula and Conrad Nenn, received a Difference Maker award for Give a Kids a Smile Day, which provides free dental work for people in need.

Ally Rising, a senior in the College of Engineering, received a Difference Maker award for her run across the country to raise funds for cancer research.

The address announced the second round of the President’s Challenge, which provides challenge winners with a two-year grant for a proposal that highlights disparities in Milwaukee and addresses work with communities and neighborhoods.

Lovell said the winner will receive $250,000, which is partially funded by Johnson Controls Foundation.