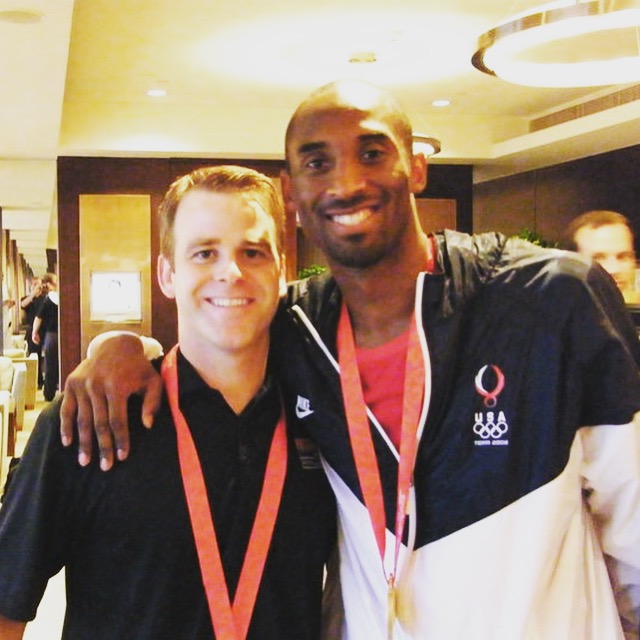 For Steve Wojciechowski, Kobe Bryant’s death Sunday struck him harder than most.

The Marquette men’s basketball head coach worked with Bryant from 2007-12 as the duo helped lead Team USA to a gold medal at both the 2008 Olympic Games in Beijing and the 2012 Olympic Games in London. Wojciechowski was a scout and court coach for the USA Basketball Men’s National Team, working with players like Bryant, Dwyane Wade and LeBron James.

“We were playing Venezuela in our first exhibition game in the Thomas & Mack Center, and he came in wanting to be a defensive stopper,” Wojciechowski said. “He was put on Greivis Vásquez, and the very first possession of the game, he picked him up full court and knocked the ball away from him for a loose ball. That really set the tone, not only for those championships, but the entire time I was with him.”

“He always wanted to be at his best. He wanted to give his team the best chance to win,” Wojciechowski said. “That was the competitive edge that propelled him to being one of the greatest players of all time.”

Millions of people around the world are still mourning the death of NBA superstar Bryant, his 13-year-old daughter Gianna and the seven others that died in a helicopter crash. The two were en route to a travel basketball game when the helicopter crashed.

In his 20 seasons with the Los Angeles Lakers, Bryant compiled a multitude of accolades. The 6-foot-6 guard was a five-time NBA champion, two-time NBA Finals MVP, the 2008 NBA MVP, 18-time All Star, 15-time member of the All-NBA Team and 11-time All-NBA First Team honoree. He also won two Olympic gold medals playing for Team USA. Bryant is considered one of the greatest athletes of all time and was named to the All-Decade Third Team.

“Everybody’s still kind of in shock. He was such a polarizing figure, not only in basketball, but in all sports,” Marquette senior guard and the nation’s leading scorer, Markus Howard, said. “I know for people in my generation, he was our GOAT. It’s a terrible event that happened, not only for him and his daughter, but all the families that were involved. I can’t do anything but pray and … hoping they’re doing alright.”

The news came hours before the Grammy Awards were to take place at the Staples Center, the place where Bryant spent his 20-year NBA career. Crowds gathered around the arena to memorialize the star guard.

“There’s few things that are as bipartisan as people’s love for Kobe Bryant,” James Wong, a professor in the ROTC department, said. “It’s something to unite behind.”

However, it was not just the basketball community or NBA greats who have posted to social media expressing their shock and sadness. Famous athletes across the NFL, MLB, NHL, WNBA, NCAA, MLS, USTA and prominent television and movie actors, singers and celebrities across all platforms have also voiced their condolences.

Arenas and iconic buildings across the country, including Fiserv Forum and the Empire State Building, are lit up in purple and yellow in memory of Bryant’s career with the Los Angeles Lakers.

“I couldn’t even imagine it would be this big,” Nathan Marzion, a junior in the College of Arts & Sciences, said. “No matter where you go, everyone’s talking about it and remembering him and his legacy. You can just see the impact he had on everything.”

Many students in the Marquette community said they couldn’t believe it when they saw the news of the crash.

“I just did not believe it at first, and I started seeing it on Instagram, Snapchat, Facebook, everywhere,” Miracle Faller, a junior in the College of Arts & Sciences, said. “He was just a good role model for the younger generation. Even my cousin (is) younger, like 10, and looks up to him. I cried all day.”

Coaches from across the nation have voiced their heartache on Bryant’s passing.

In a press conference Sunday, current Los Angeles Clippers head coach and Marquette basketball alumnus Doc Rivers was in tears when he commented on the loss of Bryant. He said Bryant had DNA that only athletes like Michael Jordan and Tiger Woods have.

“The news is just devastating to everyone who knew him,” Rivers said. “He means a lot to me, obviously. He was such a great opponent, it’s what you want in sports. … Looking at my younger players and seeing how emotional they are. They didn’t even know him. It just tells you how far his reach was.”

“Kobe Bryant’s impact on the game has inspired the world. His work ethic and focus to be the best was inspiring,” Marquette head women’s basketball coach Megan Duffy said. “It was amazing to watch after his basketball career was over how players still wanted to have a Mamba Mentality. His work to promote and support women’s basketball was tremendous.”

“Kobe’s death is an example of you never (know) when time is up. Tell all your people you love them no matter what (cause) this thing called ‘life’ is unfair,” Lott said on her Instagram story.

“This doesn’t even make sense. My heart hurts right now,” Spingola said on her Instagram story.

For Wade, he said on his Instagram story that Sunday was one of the saddest days of his lifetime.

“It seems like a bad dream that you just wanna wake up from. It’s a nightmare,” Wade said. “I know we all feel the same way about such a great leader, such a great champion, such a great person.”

The Marquette basketball alumnus said Bryant was one of his favorite players, and he’s going to miss their friendship.

“I said it many times, (when) Kobe retired from the game of basketball, it left a hole in my wanting to play. When I came into the league, I chased him. … I wanted to be respected by him and once I had reached that level, I knew I did something,” Wade said. “These tears that we crying, we’re going to miss you and it’s not going to go. It’s not leaving today, a week from now, a month from now, a year from now, we’ll forever forever miss you man.”

Bryant retired in 2016 after leading the league in scoring during the 2005 and 2006 seasons. He scored a career-high 81 points against the Toronto Raptors Jan. 22, 2006, which marks the second-most points scored in a single game since 1962 with Wilt Chamberlain’s 100-point game. This week is the 14th anniversary of Bryant’s 81-point performance.

“He came right out of high school and was a pretty high draft pick, but he still had to work so hard to keep that and win championships. He did, and he showed everyone that with hard work you can do that,” Marzion said.

The Lower Merion, Pennsylvania, native became the youngest player in NBA history to achieve the 30,000 career points mark and is currently No. 4 on the all-time scoring list with 33,643 points.

“After his playing career was done, he was thriving,” Wojciechowski said. “Not only did he seemingly transition smoothly, but he was excelling in so many areas.”

Also known as the “Black Mamba,” Bryant stressed the importance of a strong work ethic.

“The Mamba Mentality is just, he’s going to do whatever it takes to win and to get better or perfect his craft, no matter how hard he has to work or no matter what he has to do,” Marzion said. “In whatever you do, if you work hard, you can do this. With focus and hard work, you can do anything.”

“The unrequired work is what makes people great, and he took that to the ultimate level,” Wojciechowski said. “It wasn’t just the physical work, it was also the mental and emotional investment that he put into the game. … It certainly separated him as a champion.”

Despite Bryant’s death, Rivers’ Clippers, along with 15 other teams, were expected to compete last night.

“I have to go talk to a team before a game and tell them to play. I can’t,” Rivers said. “He had so much more left to do, and he was starting to do it. Never seen him happier. … Sometimes things don’t make sense, and there’s times you should feel, just … you just feel sad, and this is one of them.”

Marzion said the NBA should have canceled the eight games.

“I know people say Kobe would’ve wanted them to play, but you can’t do that to the players,” Marzion said. “How could you make them play when their friend just passed away?”

In memory of Bryant, the teams took 24 and eight-second violations at the beginning of the games to represent Bryant’s jerseys, No. 8 and No. 24, that the Lakers retired in 2017.

“We’re all Lakers today,” Rivers said. “We all have to be strong. We laughed and joked about the Mamba mentality, and we’re all going to need it right now.”

It was announced Monday afternoon that Tuesday’s Lakers-Clippers game has been postponed.

When Wojciechowski first got the news, it was hard to believe. He said it was a tough day for the basketball community, including his players.

Howard was with Brendan Bailey when he found out because the team had a mandatory off-day yesterday.

“Our whole mood kind of just changed. It was like a punch in the stomach,” Howard said. “A big piece of basketball is definitely missing. … It’s definitely something that will take time to get used to.”

However, it’s not just the basketball world having to deal with the loss of a competitor.

“Everybody — even if you don’t know him as a basketball player — everybody knows the name,” Gabrielle Prehn, a first-year in the College of Health Sciences, said. “Americans are really good at rallying behind a certain cause. … They’re good when something devastatingly happens.”

“Everybody’s grieving. Even though you don’t know him personally, you feel like you know just with his impact that he’s had on the game,” Howard said. “He was just the ultimate competitor. Night in and night out, no matter what the circumstance was, he always gave his all.”

Bryant’s impact on the sport of basketball was more than just his Mamba mentality. It is also his attention to detail.

“It was something that really made him special,” Howard said. “His pursuit for trying to score the ball is something that I try to emulate in my game. There’ll be no one like Kobe. He’s one of a kind.”

His work off the basketball court, along with his prowess on it, is why so many people consider him a legend.

The college-aged generation is the one who grew up idolizing Bryant.

“Even when I played basketball, my friend would throw a basketball and say ‘Kobe.’ I didn’t really know what it meant, but I just say it because that’s what everyone says,” Natalie Kalinowski, a senior in the College of Engineering, said.

Bryant’s controversial past has also come to light, as he was charged with one count of felony sexual assault in 2003 after an allegation. The charge was dropped in 2004, and the case was settled in a 2005 civil suit.

Now Howard said what’s important is embracing time with love ones because that one moment could be the last.

“When you have an event like what happened yesterday … you come to realize that there are so many more important things than the game you play. Just putting into realization that what’s really important is the people you impact each and every day and people you’re around and the relationships you build,” Howard said. “Basketball: We treat it as life and death, but really it’s just a game.”