Student group calls for university to divest in fossil fuels 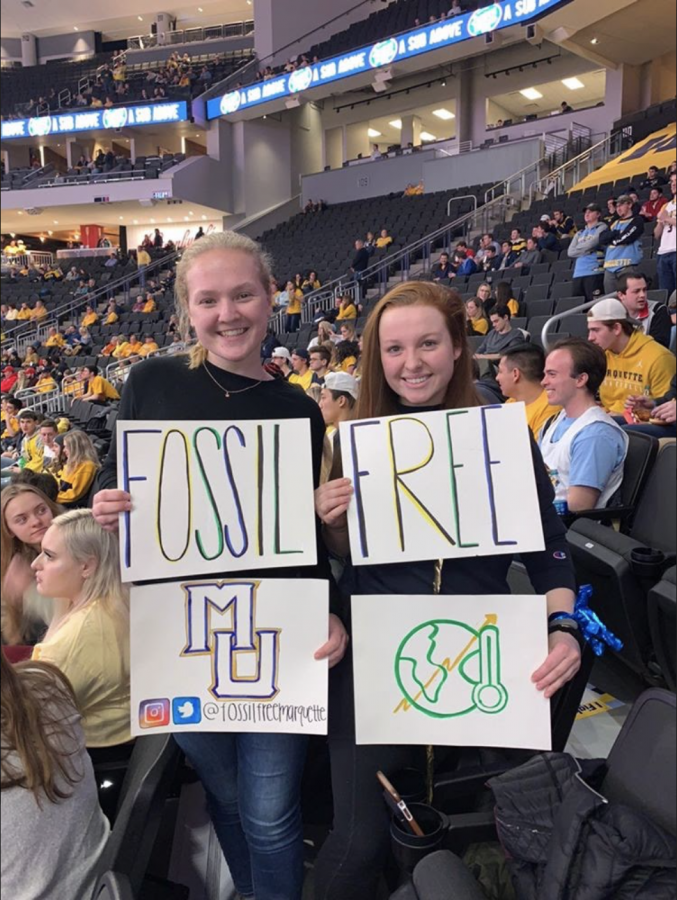 A student group is calling for Marquette to end its investment in the fossil fuel industry and go carbon neutral.

Fossil Free Marquette claims that the university uses part of its $700 million endowment to invest in the fossil fuel industry, according to the group’s Instagram page. Sean Gissal, the university’s chief investment officer, told the Marquette Wire that he was off campus and unable to confirm the alleged investment.

Schwabe and Kuenn said the group began largely due to Miscimarra’s meeting with Gissal to discuss university investments, which Miscimarra then brought up to Students for an Environmentally Active Campus, a Marquette student organization that promotes environmental activism. At the time of the meeting, Miscimarra said Gissal confirmed the university’s investment in fossil fuels.

The members of FFM said they felt concerned for Marquette’s investment in fossil fuels because of the industry’s impacts on climate change. The members all said they also felt that such an investment does not align with the university’s mission.

“Marquette University claims they are dedicated to the ‘common benefit of the human community,’ but their support for the single industry that has contributed the most to the climate crisis proves otherwise,” a post on the group’s Instagram page reads.

Kuenn said climate change primarily affects developing countries, while people in Milwaukee might not be affected.

“Looking out for your neighbors is one of the biggest responsibilities of Christians and Jesuits,” Kuenn said. Therefore, she said, investing in an industry contributing to climate change does not align with the values emphasized by the university.

Schwabe said most people in positions of power are driven by money. This includes the university’s investments.

Kuenn added that it is more important now than ever to be aware of climate change.

“As young people, it’s directly affecting us so much,” Kuenn said. “This is our future that we have to look out for.”

The group is encouraging university divestment from fossil fuels, with Miscimarra citing actions that other universities have taken.

“It might seem like it’s not making a difference if an institution were to divest, but tons of universities have done so already to put pressure on the fossil fuel industry,” Miscimarra said.

He said the University of California divested from fossil fuels last year due to economic reasons. An article from the Nation states that the university’s divestment was due to the financial risks in its fossil fuel stocks.

In November, Yale and Harvard students, alumni and faculty demanded divestment from fossil fuels and a cancellation of holdings in Puerto Rican debts by storming the field at a Yale and Harvard game, according to a tweet from Fossil Fuel Divest Harvard, a similar group at Harvard.

FFM is involved with the Catholic Divestment Network, a coalition of Catholic and Jesuit universities that run campaigns to divest in fossil fuels, Kuenn said.

Although the group has not begun discussion with administration members, they said they are mainly prioritizing awareness this semester.

The group plans to partner with various organizations on campus, including SEAC, Mardi Gras and Campus Ministry, Kuenn said. Schwabe said although the group is non-partisan, it also plans to reach out to College Democrats since climate change is a political issue and a part of Democrats’ concerns.

Fossil Free Marquette also wants to arrange a panel or event through Marquette University Student Government where ideas about investment and climate change can be discussed, Kuenn said.

Currently, Schwabe said the movement is in its early stages, but the group has been gathering interest and has about 40 people on its email list. It hopes to spread awareness across the university, Kuenn said.

“I think the biggest step right now is to make more students aware of it,” Kuenn said. “Before (Schwabe) brought it up to me, I had no idea we had investments in fossil fuel industries.”

“We want administrators to know that people are starting to get concerned about it,” Schwabe said.

The group is launching a petition on its Instagram to encourage the university to halt investment in fossil fuels.

Kuenn said that if the university were to halt investments, Fossil Free Marquette would hope to encourage the university to invest in environmentally responsible industries such as renewable energies.

Another group of students delivered a letter to university officials during a demonstration last semester that called on the university to end investments in fossil fuels and in a hedge fund known as Baupost, which owns nearly $1 billion in tax bonds of Puerto Rican debt. The Marquette Wire could not confirm whether the university is invested in the hedge fund.

“We are demonstrating today because you are not staying true to the Jesuit values you so proudly espouse,” the letter to Marquette administrators said. “Your investments in fossil fuels and Baupost are in direct contradiction to the Jesuit Mission.”