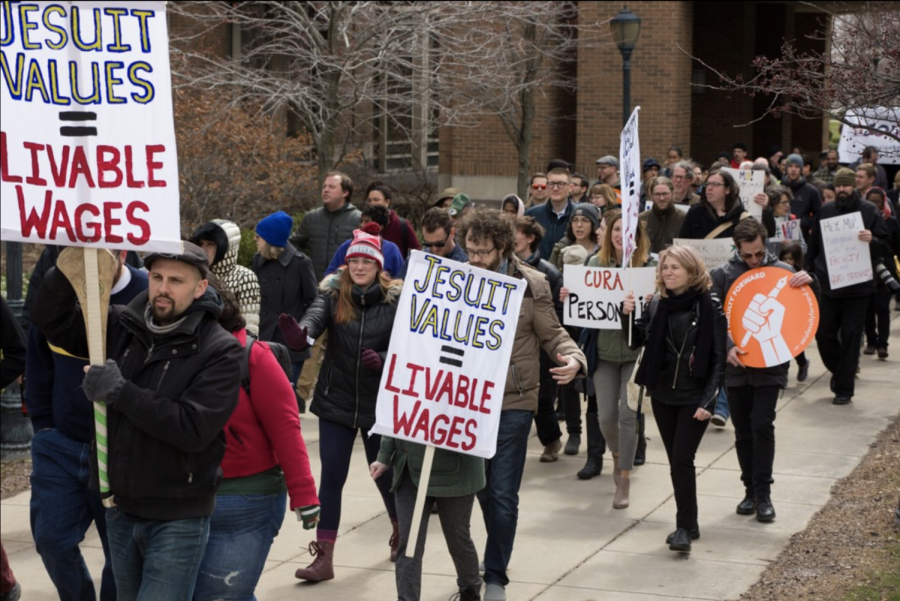 A group of non-tenure track faculty and graduate student workers at Marquette who are involved in unionization efforts received a letter from Bernie Sanders, a Democratic presidential candidate Jan. 20.

“I want to commend you and your colleagues on your vigorous movement to organize non-tenure track faculty and graduate workers into a union to collectively bargain for better wages and working conditions,” the letter reads.

The letter provides statistics regarding the conditions of employees who are unionized versus those who are not. It states that union workers earn 27% more on average than non-union workers and have better working conditions and benefits.  According to the Bureau of Labor statistics, non-union workers had weekly earnings that were 81% of what workers who were union members earned.

“I stand with you in this fight as do millions of Americans across this country. Your critical work to create a democratic workplace where workers have a voice is an inspiration to us all, and I look forward to the day when Marquette contingent faculty can sit at the bargaining table with the university administration,” the letter concludes.

“Thank you, @SenSanders and @MarkPocan for relentlessly fighting for grad student workers! University administrators have been happy to let the Trump (National Labor Relations Board) carry water for their anti-union tactics. So good to see that we have you fighting for us in Congress!” Thomas Hansberger, a lecturer in the College of Arts & Sciences, said in a tweet in response to the act’s introduction.

NLRB is an independent government agency that focuses on rights of employees, according to its website.

The group has also been reaching out to other politicians, such as Elizabeth Warren, a Democratic candidate for president, to garner support, Hansberger said.

“Marquette greatly values the contributions of our faculty — both tenured and non-tenure track — who are core to providing a transformational education rooted in our Catholic, Jesuit mission,” university spokesperson Chris Stolarski said in an email.

Stolarski said Provost Kimo Ah Yun met with leaders of the union campaign following rallies last spring. At the time, union members rallied at Zilber Hall and other locations across campus to call on the administration to recognize a formal process to unionize.

Since then, Hansberger said meetings have not continued.

“It’s been very clear that (President) Lovell does not want to meet with us,” Hansberger said. He said Lovell has evaded appointments and meetings and has not shown up in the past.

Although Hansberger said meetings have not continued, Stolarski said the university has implemented various developments in response to feedback from non-tenure track faculty.

Stolarski also said the university has begun evaluating criteria for paying cancellation fees to part-time faculty whose courses are cancelled shortly before the year begins and that it has begun reviewing the policy on multi-year contracts for certain non-tenure track faculty who meet requirements in length and service.

Gooding said the university’s efforts toward non-tenure track faculty are due to the public pressure that occurred in April and May from the rallies.

Despite lack of public rallies in the fall semester, the union campaign has continued to gather support by reaching out to people in the Marquette community and discussing goals, Gooding said.

Group members have discussed concerns such as health care, living wages and job security with members of the community, Susan Giamo, an adjunct associate professor of political science, said.

The group’s plans for 2020 are still uncertain, Hansberger said. Gooding said they intend to continue gathering support in order to call an election to have an official union.

“We’re continuing to campaign, and we’re not going away,” Hansberger said.