PREVIEW: Women’s lacrosse looks to bounce back after crucial losses on offensive end 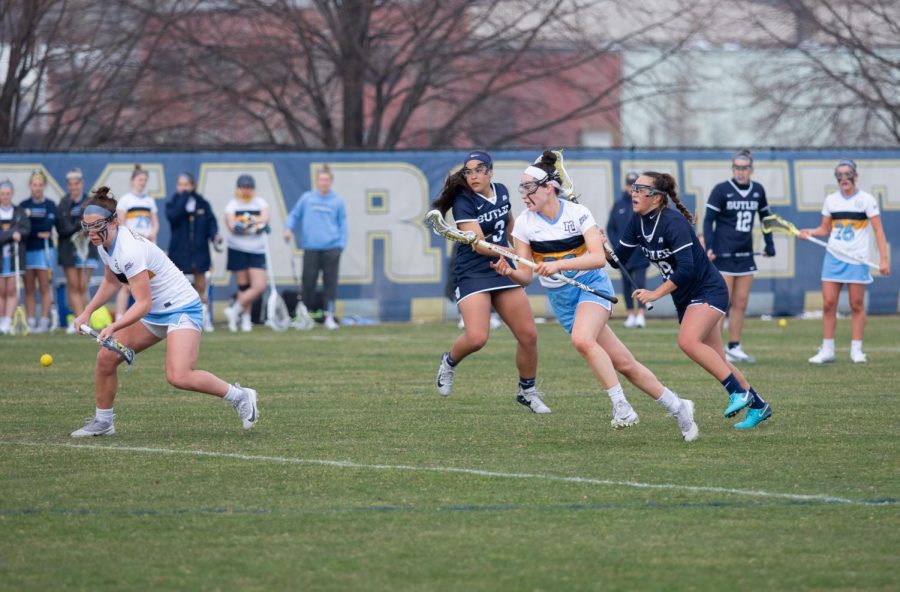 After losing in the semifinals of the BIG EAST Tournament last season, the Marquette women’s lacrosse team has high aspirations heading into the 2020 spring season.

Last year marked the second year in a row the Golden Eagles made it into the conference tournament, hosting last season’s league championship.

“We want to win the BIG EAST Tournament,” head coach Meredith Black said. “We want to win a national championship. We’ve made it to the tournament. We know what (it) entails, so now it’s like ‘Let’s go.'”

The Golden Eagles enter the season featuring a relatively young roster with nearly one-third of the team being first-year players.

“Our (first-year) class is talented,” Black said. “I believe we have a lot of potential.”

Perhaps the bigger storyline, however, is the loss of BIG EAST Co-Midfielder of the Year Grace Gabriel and Charlotte McGuire, who finished first and second on the team in scoring last season, respectively.

“We’ve lost a huge chunk of scoring … (we) can no longer rely on one person,” Black said. “In a pinch, we could rely on Grace. We could give her the ball, and she would probably score.”

Without their contributions, Marquette will look to utilize a more complete team effort.

“When you lose your two key players, you lean on everybody else,” Black said.  “This year, every single player will contribute and bring a lot to our success. It creates a higher sense of urgency for everyone else.”

The Golden Eagles nonconference schedule features four returning NCAA tournament teams, including No. 4 Northwestern and No. 9 Notre Dame, according to the IWLCA Top-25 poll.

“It’s tough. We like it that way,” Black said. “We know we have to play the best to be the best. All those top schools … they really challenge us. They show us where we have to be.”

The team has never earned a victory against a ranked nonconference opponent. Black said she hopes to change that this season.

“That’s a super big goal for us,” Black said. “It’s something we really want to do.”

In the BIG EAST, Denver, Georgetown and Villanova are likely to be the three powerhouses of the conference. Black said those matchups will be key games to win. MU finished fourth in the BIG EAST last season with a 3-2 record.

Marquette will rely upon sophomore Shea Garcia and senior Megan Munzuber to facilitate its offense.

“For me, I’ve been working on becoming more dynamic and trying to fill the shoes of the girls that left last season,” Menzuber said. “We’re shaping our offense a little differently than last year so we can use each and every player. Overall, we’ve been working well with each other.”

“(Menzuber) is an outstanding leader. She makes everyone around her better,” Black said. “She will do whatever it takes (to win). She puts work into her weaknesses and maximizes her strengths. She’s going to be responsible for a lot of the stuff that happens on the offensive end.”

Outside of those two, Black said she believes first-years Emma Soccodato and Hannah Greving are poised to have breakout campaigns this season.

Soccodato is the younger sister of Cate Soccodato, who played for Marquette from 2016-2019. She played in 65 games and tallied 142 points in her collegiate career.

Although there is no assigned captain for the midfielders, Black believes junior Madison Kane will take charge of the group.

“(Kane) brings a lot of athleticism to the midfield,” Black said. “She’s really standing out. She’s good on both sides of the ball, which is what you need to be a great midfielder. She’s a stud.”

Last season, Kane finished seventh on the team in scoring with 23 points, 14 of those being goals.

Along with Kane, the Golden Eagles will look to sophomore Ellie Henry to lead the midfield group, especially on defense.

“(Henry) will win a lot of draw controls for us,” Black said. “She’s going to be a big presence on the field.”

The Golden Eagles aren’t as experienced on defense compared to last year. Four of the eight defensive players are underclassmen.

This season, Viviano said the defense plans to play more together rather than individually.

“Last year there were some points where we were focusing more on the individual play rather than the entire team,” Viviano said.

Black expects junior Jocelyn Miller to play an integral role in the Golden Eagles defense. Miller was named to the All-BIG EAST First Team in 2019.

“We have some tough kids coming in with Miller leading the way,” Black said “We have the right mentality, it’s just a matter of executing the physical part of it. We’re going to adjust a little bit, and I think we’ll find some success.”

Julianna Horning enters her senior year as the starting netminder for Marquette after starting all 18 games last season. She currently holds the program record for saves in a season with 153.

“(Horning) is someone who has gotten better every single day,” Black said. “She’s a very smart player. She’s one of the easiest goalies I’ve ever coached. She gets it.”

The Berwyn, Pennsylvania, native ranks first all-time in MU history in wins with 20. She also leads the program with saves per game (7.76) and is currently second in saves with 376. Horning looks to cap off her senior season as the best goalie in program history.

As Horning enters her second season as captain, she said she doesn’t plan on changing her leadership style.

“Being a senior, it’s a little bit of a different role as opposed to a junior,” Horning said. “Just staying true to what I know I’m good at, like being active outside the cage and being patient on shots. I really emphasize the mental aspect of the position.”

First-year midfielder Leigh Steiner and first-year defense Kate Pearson are currently working their way back from injuries, per Black. Black said she’s hopeful Steiner and Pearson will be ready to go for the season opener Feb. 9 against Notre Dame.

This article was written by Tyler Peters. He can be reached at tyler.peters@marquette.edu or on Twitter @_tylerpeters_.