Students protest against March for Life 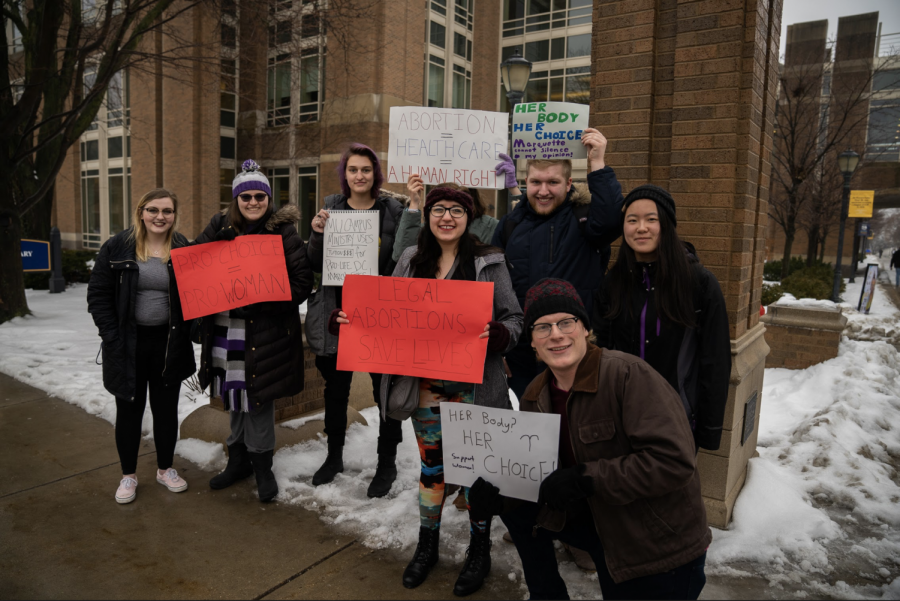 Roe v. Wade, a Supreme Court case which ruled that women in the United States have the fundamental right to choose whether or not to have an abortion, had its 47th anniversary Jan. 22.

Beginning at noon, the students protested Campus Ministry’s, and consequently the university’s, funding of the trip.

While the local protest was not officially sponsored by any Marquette student organization, leaders of the Marquette College Democrats and Marquette Empowerment were in attendance.

Marquette Empowerment is an intersectional feminist organization which strives to combat injustices concerning all people, according to its Facebook page.

Morgan Knigge, a junior in the College of Business Administration and president of Marquette Empowerment, said she organized the protest after learning about where the funding for the March for Life trip came from.

“I learned that trip is partially funded by campus administration, which means that as students, our campus dollars are funding a group of kids going to a political march in D.C.,” she said. “I think regardless of your political affiliation, that’s not a proper use of our money. I don’t think that’s a good way to be using students’ money, especially when so many students and faculty members here do not agree with the movement.”

Maria Bunczak, a senior in the College of Nursing, said after looking into how Marquette’s March for Life organization was funded, she thought it “wasn’t right.”

“Marquette tuition dollars do not fund clubs like Empowerment, so why should they fund people going and marching in D.C. against abortions?” Bunczak said.

Bunczak said she further disagrees with the March for Life trip because she believes abortion is health care, and that health care is a human right.

“We believe very strongly that in civil rights and civil liberties … health care is a human right, and abortion is health care,” Eric Rorholm, junior in the College of Arts & Sciences and chair of the Marquette College Democrats, said.

“Marquette likes to pretend they don’t take sides, but they do,” Shannon O’Connor, a senior in the College of Arts & Sciences, said. “If they’re gonna play sides, they should play both sides.”

Morgan said the main goal of the protest was to raise awareness about what the university is doing in regards to funding the March for Life trip.

“My goal today is to let people know that this is going on,” Knigge said. “I think a lot of people don’t know that this trip is happening … and that it’s being funded partially by the university. I want to motivate people to take action on that and speak out against it.”

O’Connor said she hopes to get the attention of the administration in addition to the general Marquette community.

“I’d love for them to defund the trip, but I don’t think it’s going to happen because March for Life is in their pockets,” she said.

Knigge said she hopes the university stops funding this trip, or gives equal funding to every political group on campus.

“I think we would all like a trip to D.C. to do various protests and marches,” Knigge said. “It’s kind of unfair (for) the university to pick and choose whichever ones they personally agree with.”

“It’s frustrating because Marquette is wasting a lot of money on a lot of anti-scientific propaganda,” Rorholm said. “It’s a waste of our money, and we as students do not consent to our money funding students protesting civil rights and civil liberties. It feels very anti-democratic.”

Protesters also emphasized that the protest, which was on the sidewalk on Wisconsin Avenue, was on public property. Bunczak said this was in order to appease Marquette’s demonstration policy.

Marquette’s demonstration policy, which was last officially updated in August, concerns restrictions on demonstrations by students, faculty and staff.

“Marquette claims to be about dialogue, yet when College (Democrats) and Empowerment tried to have a speaker last year from a pro-choice organization come, they shut that down,” Bunczak said.

Last April, Marquette University’s Division of Student Affairs did not allow Marquette Empowerment and Marquette University College Democrats to host a speaker from the Women’s Medical Fund, an organization which provides financial assistance to people in Wisconsin who need abortions and cannot afford the full cost.

Bunczak said the organizations aren’t asking for funding. She said that they were simply registering the event when Marquette said it went against its Jesuit values.

“Marquette is stifling our freedom of speech,” Bunczak said.

This story is written by Alexa Jurado. She can be reached at alexa.jurado@marquette.edu.