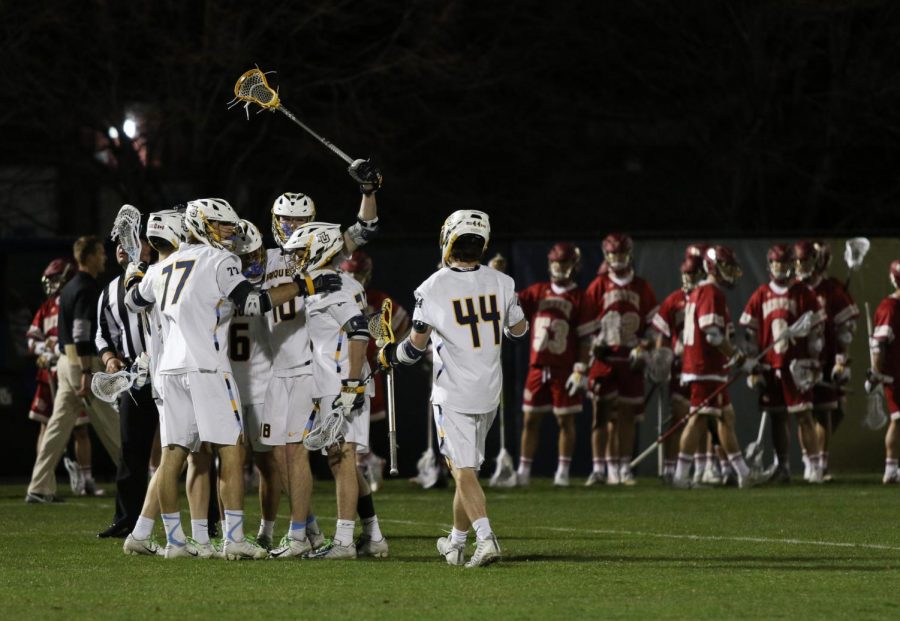 Marquette celebrating a goal in the team's 9-8 loss to the University of Denver on Apr. 26 2019

There is a new regime in the Marquette lacrosse program.

After ending the 2019 season with back-to-back losing records, the squad also lost its first-ever head coach Joe Amplo when he left to coach at Navy lacrosse. The team is also without longtime stars Noah Richard, Tanner Thomson and John Wagner, who all moved on to the professional ranks.

“We’re a different team this year,” sophomore attackman Holden Patterson said. “We’re excited for what that brings us. (We’re going to) continue to work and see what we develop into.”

Even though the team lost its entire defensive unit and a number of offensive dynamos, its expectations have not lowered.

With a stacked BIG EAST once again, Marquette was selected to finish fifth out of six teams in the 2020 Preseason BIG EAST Coaches Poll and had zero players selected to the preseason all-conference team.

Senior midfielder Luke Anderson said the players are looking forward to show that this team will not be a pushover.

“(People) should expect a bunch of guys that are hungry to not only prove themselves but to prove what this team can be made of,” Anderson said.

“It’s a deep group at attack for us,” Stimmel said. “We’re really excited about this unit. It’s young … but they’re really playing freely and playing with each other well.”

The group will be led by senior Ryan Fazio, a 5-foot-11 California native. After scoring seven goals and notching six assists a season ago, Fazio will serve as the squad’s primary X attackman this season.

Patterson and first-year Devon Cowan will round out the starting attack lineup.

Patterson appeared in 14 games last year, earning four starts and putting up six goals and one assist while primarily playing on man-up opportunities.

Meanwhile, Cowan is a New Jersey native who tallied 110 goals in his high school career. The 6-foot-1 first-year attackman was a four-star recruit coming out of the Hun School, and both Patterson and Stimmel said he will be a big factor in the lineup this year.

Stimmel said he expects junior Keaton Thomson and redshirt sophomore Garrett Moya to rotate between the attack and offensive midfield positions as needed.

“The midfield is definitely led by (Peter) Henkhaus and Connor McClelland, two seniors who have done a really nice job,” Stimmel said. “We’re really going to rely on them heavily this year to lead us offensively. We really feel like they have a two-way game: they can play defense, they can ride well, they’re really good in the middle of the field.”

Henkhaus tallied 17 goals and four assists a season ago, starting in all but one of his 13 appearances, but will be leaned on more heavily after the graduation of Tanner Thomson, Bob Pelton and Jack Zerrillo.

McClelland, a 6-foot native of Ontario, started 10 games last year while notching 12 goals and nine assists. The Canadian lefty played for the Brampton Excelsiors of the Major Series Lacrosse league this summer and was able to work on becoming a two-way midfielder.

First-year midfielders Jake Stegman and Chris Kirschner will have the chance to prove themselves in the MU midfield early on this season.

“I really like Kirschner,” Henkhaus said. “He’s a freshman on the offensive midfield that’s moving fast, shooting a lot and looks really good out there.”

Junior Anthony Orsini and senior Tommy von den Benken are also expected to see some time on the field after spotty appearances in recent years.

Anderson will spearhead the unit after totaling 28 ground balls, nine goals, seven caused turnovers and three assists last year. The Minnesota native is a strong, physical SSDM who can blow by his defenders in transition.

Redshirt sophomore Jordan Schmid made the shift from offensive midfielder to SSDM this season. Off the field, Schmid is the president of the Marquette Student-Athlete Advisory Committee, went on the Marquette Athletics Puerto Rico service trip this summer and is co-leading the Fellowship of Christian Athletes chapter at MU. But on the field, he will likely fill the spot left by Nick Singleton’s graduation.

First-year midfielder Max Kruszeski is going to crack the rotation right away. Kruszeski was a three-time team captain throughout high school and played club lacrosse for Team Long Island and Long Island Express.

Sophomore Logan Kreinz played in nine games last season, tallying one goal and five ground balls on the year. Junior Jacob Hallam appeared in just two games last year before suffering a season-ending injury but will be back in the rotation this year.

“Hallam is going to step up this year after missing some time last year with an injury,” Anderson said. “Kreinz is going to be back as well, Jordan Schmid also. We’re going to have a good, well-rounded group.”

After the graduation of USILA All-American Noah Richard at LSM, there was speculation over who would take the mantle as the Golden Eagles’ long-stick midfielder.

“(We have) three LSMs who we feel can play up top or down low,” Stimmel said. “But they’ve really established themselves this year as guys that we’re going to depend a lot on.”

Junior Moey Lardy was the second LSM a season ago, seeing action in 14 contests, picking up seven ground balls and causing one turnover.

Redshirt junior Anthony Courcelle played in all 14 games last season as a short-stick defensive midfielder, but has switched back to his normal long pole and will be a major force at whatever spot the team needs.

“(Courcelle) playing short stick last year was more of a testament to him as an athlete — fulfilling a need we had,” Jake Richard said. “His true home is at long-stick midfielder. He has some great ability to make plays in the middle of the field, he’s probably the best athlete we have and he’s fun to watch.”

Redshirt first-year James Amorosana is the other option at long-stick midfielder. The 5-foot-9 New York native earned a number of regional awards in high school while playing in one of the biggest lacrosse areas in the world, Long Island, and Stimmel said he expects him to serve an important role when he steps on the field this spring.

Fast forward to a year later, and the unit looks completely different. Due to the graduation of Ehlert, the transfer of Grill and the end of Connolly’s eligibility, it will be a much different look for the Marquette close defense.

“It’s been a lot of fun to have those guys trying to figure it out on the fly with each other,” Stimmel said. “We feel like we have a number of guys that are in the mix. We’re looking forward to seeing what combinations work for us.”

Mason Woodward, a first-year close defenseman, will lead the defensive group. The 6-foot-2 player from Maryland is the No. 99 overall player in his class and brings a physical presence to MU’s backline.

Redshirt sophomore Zach Granger will fill another one of the starting roles after sitting out last season with a leg injury. Granger is officially listed as a long-stick midfielder, but Stimmel said he will play down low for this year’s squad.

Senior P.J. Cox, first-year Noah Verlinde and Courcelle are in the mix for the third starting spot and will likely all see time on the defensive unit.

Cox, a 5-foot-9 senior, played in 11 games last year mainly as the substitute defenseman in man-down situations and  earned two starts when Connolly was hampered by injuries.

Verlinde is a 6-foot-3 defender and will push for time right away. The Michigan native was a three-time team MVP and captain in high school.

The Golden Eagles are going into the 2020 season with a familiar face as the starting goalkeeper.

Junior John Hulsman will be the starter between the pipes this spring. Hulsman had instant success following his transfer from Bellarmine last year, making 113 saves and allowing 11.32 goals per game.

Stimmel expects the junior to be a leader for the team and make big plays on the field.

“(Hulsman) has been consistent since day one,” Stimmel said. “He has years of experience and has shown that through making incredible saves. We need a leader, and he will be someone we look to rely heavily on.”

Senior Chris Rolfing and junior Gabe Stein are goalkeeper contenders as well. Each made appearances in the cage last season and will serve as backups to Hulsman once again.

Sean Richard, a first-year from Northville, Michigan, is a new addition to the goalkeepers and may see some reps.

As for the faceoff position, Stimmel said senior Jared Hershman and sophomore Thomas Washington have shown the ability to be strong when put to work against opponents.

“They are two guys that battle it out and will be an effective force for us,” Stimmel said. “They do a nice job when it comes to pushing each other. They better the unit as a whole.”

Hershman is projected to see a consistent amount of time at the faceoff X. The 5-foot-10 senior won 100 faceoffs last year for a 52.6% at the dot and has international experience competing with the Puerto Rican men’s national team.

Washington will be another familiar face for MU fans this year. The 5-foot-6 sophomore proved to be a force in his first season, winning 49 faceoffs. His successful first year gives promise for an impressive sophomore season.

Sophomores Jack Devine and John “Parker” Underwood, as well as first-year Luke Williams, will also see some reps at the X.

Redshirt sophomore SSDM Aaron Joseph and redshirt junior attackman Griffin Fleming both suffered leg injuries in the fall and will likely be out for the entire season.