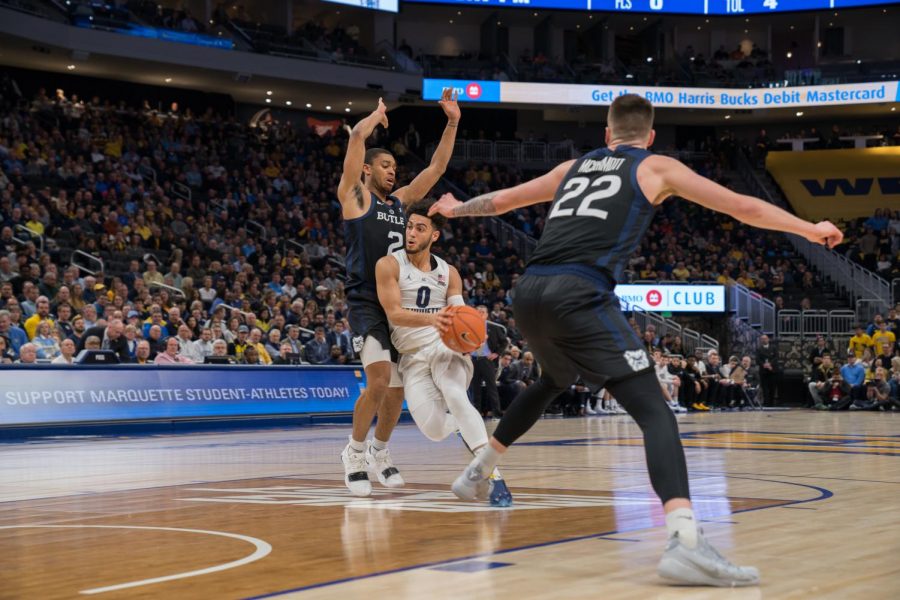 The Bulldogs come in ranked No. 13 in this week’s Associated Press Poll and after three consecutive losses, drop to sixth in conference standings with a league record of 3-3. According to the NCAA Evaluation Tool team sheet, Butler ranks ninth in the NET rankings and as MU possesses a NET ranking of 27, this will be the Bulldogs’ eighth Quadrant One opponent. Butler is 1-1 against Quadrant One opponents at home, falling 78-70 to Seton Hall Jan. 15.

Butler is coming off a 76-61 loss to then-No. 9 Villanova Tuesday. Kamar Baldwin led Butler with 21 points as Bryce Nze and Bryce Golden each tallied 11 points. Nze also added 12 rebounds for his third double-double of the season. Despite the Bulldogs holding the Wildcats to 38% shooting, it was the free-throw shooting that made the difference as Villanova shot 21-for-23 from the charity stripe. Butler went 5-for-20 from deep even though they shot 41% from the field.

“We did a good job at Villanova, but not good enough. They played better,” Butler head coach LaVall Jordan said. “We just want to get back to playing our best basketball, but I think we took a step in the right direction the other night.”

One of the crucial players is Baldwin, a 6-foot-1 senior guard. Last season’s All-BIG EAST Second Team honoree was selected to this season’s Preseason All-BIG EAST First Team along with the Wooden Award, Naismith Trophy and Lute Olson Award Midseason watch lists. He was also one of 20 players chosen for the 2020 Jerry West Shooting Guard of the Year Award watch list. McDermott, the 6-foot-6 redshirt senior has also been an important part of Butler’s roster, averaging 11 points and 5.7 rebounds per game this season. Besides Baldwin and McDermott, another standout is junior guard Aaron Thompson, who has been picked to the 2020 Midseason Team for Naismith Men’s Defensive Player of the Year.

“Obviously Kamar Baldwin, (Sean) McDermott and guys like that commit a lot of attention,” DePaul head coach Dave Leitao said. “But I don’t know that there’s a more important player on Butler’s team than Thompson. One, because he has the ball in his hand and is able to push pace and dictate so many things. … On defense, he is probably one of the better on-ball defenders this league has. ”

The Bulldogs are playing without 6-foot-6 forward Christian David, who is out with a knee injury for the remainder of the season. The injury occurred Tuesday night against Villanova. This season, David had averaged 2.6 points and 1.8 rebounds in 17 games prior to his injury.

“(We) just feel for him just in terms of what he had gotten himself prepared over the offseason, in the spring and the summer,” Jordan said. “He got himself in the lineup and had a great impact, especially defensively. He’s one of the reasons that we were as good as we were defensively, just his versatility, ability to guard multiple positions, he got a ton stronger, much more confident. It’s a big loss for us.”

Howard leads the nation with 28.4 points per game and after Tuesday’s win, the senior guard moved up to sixth on the all-time BIG EAST scoring list through league games with 1,292 career points. Former Seton Hall’s Jeremy Hazell sits at fifth with 1,316 points.
Butler leads the conference in scoring defense, allowing 58.1 points per game, while Marquette is second for scoring offense averaging 77.8 points per game.
The Bulldogs ended 12-1 in nonconference play with its only loss to then-No. 11 Baylor Dec. 10. They were undefeated in BIG EAST play up until their Jan. 15 loss to Seton Hall.
Butler was picked eighth in the BIG EAST Coaches Poll.
The Bulldogs’ one home loss came to then-No. 18 Seton Hall Jan. 15. BIG EAST home teams during league matchups this season combine for an overall record of 20-12.

The series dates back to the 1922-23 season and Butler leads the all-time series 22-19 and are 11-6 when in Indianapolis.
Marquette won both the home and away games last season, but before that hadn’t won since Jan. 30, 2016. MU’s win Jan. 30, 2019 marked the program’s first victory at Hinkle Fieldhouse since Butler joined the BIG EAST.
The Golden Eagles beat the Bulldogs 18-17 in the first game between the programs Dec. 16, 1922.
From 1942-90, MU was on a nine-game win streak. But once Marquette moved to the Great Midwest Conference, the two teams didn’t meet again until the 2012 Maui Invitational, when the Bulldogs hit a buzzer-beater.
In the 2013 NCAA Tournament, the Golden Eagles downed Butler 74-72 in the final seconds to earn a trip to Marquette’s third consecutive Sweet 16 appearance.

Baldwin ranks 10th in the BIG EAST and paces his team’s offense, averaging 15.4 points per game. He has a team-best shooting percentage, going 112-for-266 in 19 games played this season.
Nze sits at sixth in the league and leads his team for rebounds with seven per game. The redshirt junior forward is also second for shooting percentage, going 76-for-122 from the field.
Thompson is third-best in the conference for assists with 5.05 per game and falls second on the Bulldogs’ roster with 12 total blocks.
Senior center Jayce Johnson has been a huge presence in the paint for the Golden Eagles and has averaged a team-high 7.2 rebounds in 17 minutes per game in conference play.
John recorded six blocks Tuesday, which was his second-best this season and now sits at third in the league with 1.89 blocks per game.

Marquette: Stay aggressive on rebounds and second-chance points. The Golden Eagles lead the league with 29.95 defensive boards per game. Additionally, MU must find a rhythm with the 3-point shot. Marquette still leads the conference with 10 threes per game and also shooting 40% from beyond the arc.
Butler: Possess the advantage on the defensive glass. The Bulldogs are the best scoring defense in the BIG EAST and also have the best defensive rebound percentage in the conference at 77%. Also, Butler must guard the 3-point line. The Bulldogs sit at the top of the league for 3-point defense, holding teams to 28% from three.