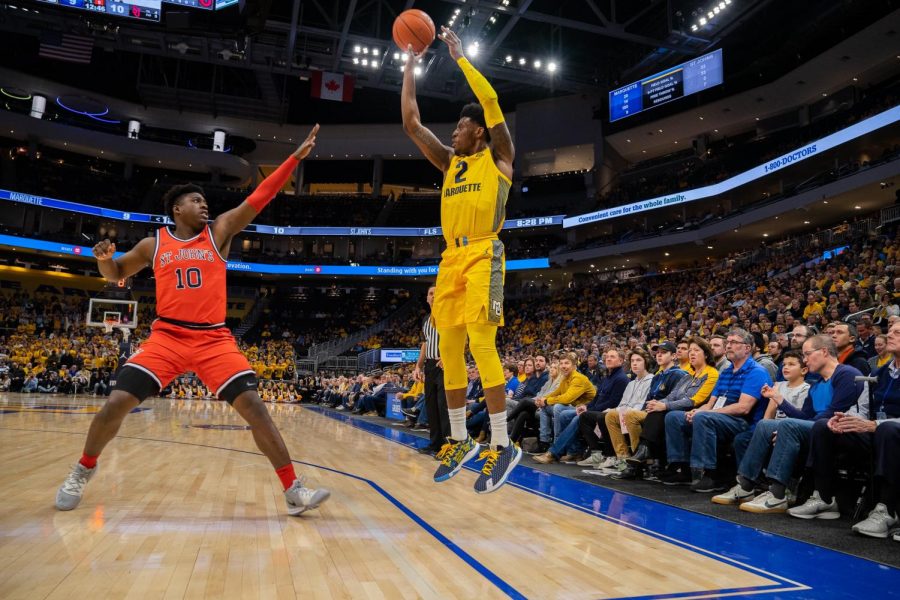 Marquette accomplished many firsts this week: Saturday was the team’s first conference victory on the road and after beating St. John’s 82-68 Tuesday night, the Golden Eagles possess their first winning record in BIG EAST play.

Despite poor shooting from both teams in the first half, it was the Golden Eagles’ ability to distribute the ball that benefitted them down the stretch. Here’s a quick breakdown of the victory:
Game MVP
Redshirt senior Sacar Anim had a career night, attempting 11 3-pointers, which is the best in his five-year tenure. His previous best for 3-point attempts was seven against Grambling State Dec. 17.

“Early in the game my shots weren’t falling, but my teammates and coaches gave me unbelievable confidence,” Anim said. “They told me ‘Continue to shoot the ball’ and they (knew) it was going to fall. The second half I came in with a clear mind … and let the shots fly. Thank God they went in.”

Anim, who came into the game averaging 12.1 points per game, tied his season-high of 21 points on 6-for-14 shooting. Fourteen of his 21 points game came in the second half. His second-half performance was capped off with four 3-pointers. This is the 13th time over 19 games the 6-foot-5 guard has reached double figures in scoring.

“Sacar is one of the more underrated players in the BIG EAST,”  Marquette head coach Steve Wojciechowski said. “Sacar does whatever we ask him to do and he has done whatever we’ve asked him to do to put his team in a position to win. I think the world of Sacar.”

The Minneapolis, Minnesota native also had two dunks in the first half. The first at the 15:30 mark and the second with 4:42 remaining until halftime.

“That was better than threes for me. That’s the most I’ve had in one game,” Anim said. “Old man (has) a lot of youth, you know.”

Both teams were off to horrible offensive starts, going a combined 12-for-37 from the field by the under-eight timeout in the first half.
MU had 23 points on the fast break and five dunks. Anim, Jamal Cain, Brendan Bailey and Jayce Johnson all recorded dunks.
At the 19:42 mark in the second, Nick Rutherford was credited with a technical foul, which was his fourth of the game, which meant Markus Howard started the half out with five free points off free throws. Rutherford sat for most of the second, eventually fouling out with 47 seconds remaining in the game. He only scored two points.
Marquette wasn’t afraid to share the ball Tuesday night, amassing 15 total assists. Nine of them were in the second half.
Three Golden Eagles reached double-digit points: Howard, Anim and Koby McEwen. Not only did McEwen finish with 10 points, but also a season-high nine rebounds.
Howard made 12 free throws, which was more than the entire St. John’s roster. The Red Storm went 6-for-9 from the charity stripe.
The nation’s leading scorer surpassed Kerry Kittles. and Chris Mullin to move to sixth all-time in career scoring in league games. He has 1,292 points in BIG EAST matchups. The star guard also has 200 career 3-pointers in conference play, which places him at second on the all-time leaderboard.
Thirty-two points is the most Howard has scored against St. John’s in his four-year career.

Quote of the night
Anim notched a career-best with 11 threes attempted.

When asked if it was due to hanging around Howard too much, Anim replied, “I think Markus is starting to rub off on me a little bit.”

Injury update
While Greg Elliott is still out with an ankle injury, Johnson made crucial contributions, recording nine rebounds and three assists in 15 minutes off the bench.

“Jayce has been awesome,” Wojciechowski said. “It’s good to see him healthy and he’s contributing at a very high level.”

Though Johnson still wears his knee brace, Wojciechowski said part of Marquette’s recent success has been because of Johnson’s play.

“It’s hard to miss time, especially when you’re coming into a new situation,” Wojciechowski said. “He was actually playing really well when he got hurt. Then he was out for a significant amount of time. … It’s not just these three games, it was coming.”

“Every game you play in the BIG EAST is an absolute bloodbath,” Wojciechowski said. “Every night you better be at your best and bring it for 40 minutes. For us to be able to that in three straight games, it’s terrific. However, momentum is fragile. What you have to do is take it one game at a time.”