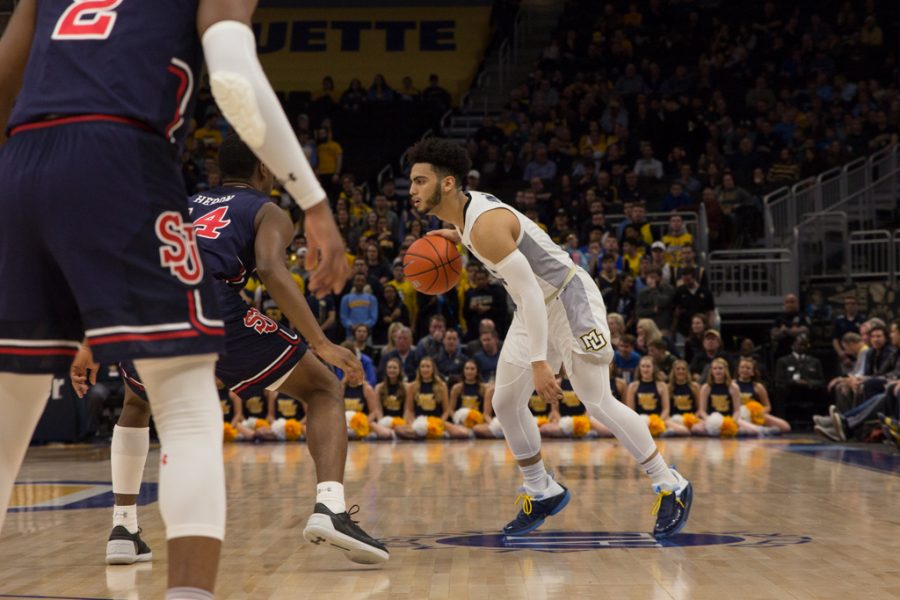 The Red Storm are in last place in conference standings with a 1-5 record. According to the NCAA Evaluation Tool team sheet, SJU ranks 76th in NET rankings. This will be their seventh Quadrant One game and the Red Storm have two Quadrant One victories over West Virginia and Arizona.

However, St. John’s is coming off a loss to No. 10 Seton Hall Saturday. Despite a 13-point lead at the half, the Red Storm were unable to hold off the Pirates, losing 82-79 at Madison Square Garden. The Red Storm had their best offensive performance in conference play, shooting 44% from the field. Mustapha Heron scored a team-best 18 points on 6-for-13 shooting.

Meanwhile, Marquette won its first road game of conference play, beating the Georgetown Hoyas 84-80 Saturday afternoon. Markus Howard scored a game-high 42 points, which marked the seventh time he has reached the 40-point mark. in his career. Redshirt junior Koby McEwen played a huge role to secure the victory as the guard knocked down four free throws in the last 10 seconds.
Fun Facts

Marquette’s star guard Markus Howard was named BIG EAST Player of the Week for the fourth time this season Monday. The senior has become the conference’s all-time leader for Player of the Week awards with a total of 12 in his career.
Tuesday’s game is part of the 2020 Suits and Sneakers Week, which is when college and high school basketball coaches nationwide wear sneakers with their suits certain games to raise funds. The Coaches vs. Cancer Suits and Sneakers games this season aims to “support childhood cancer research, services, and awareness, as well as promote cancer prevention efforts targeting children.”
St. John’s ended 11-2 in nonconference play with its only two losses to the University of Vermont and Arizona State University. In league play, the Red Storm have only beaten DePaul 74-67 Jan. 11 at MSG.
SJU was picked ninth in the BIG EAST Coaches Poll.
The Red Storm look for their first road victory of the season, going 0-3 thus far. BIG EAST home teams this season combine for an overall record of 18-11. MU is 9-1 at Fiserv Forum.

The series dates back to 1959-60 as this is the 36th meeting between the two programs. Marquette leads 21-14 overall and 9-6 in Milwaukee, but St. John’s has won three of the last five meetings.
Last year the Golden Eagles struggled to beat the Red Storm in the regular season but came out with an 86-54 victory in the BIG EAST Tournament semifinals.
Tuesday night will recognize legendary Marquette head coach Al McGuire, who played three seasons at St. John’s. He led the Golden Eagles to their first NCAA Championship in 1977 and collected a 295-80 record at the helm of the program.
The Golden Eagles’ head coach Steve Wojciechowski is 6-6 all-time against the Red Storm. St. John’s first-year head coach Mike Anderson is 4-1 against Marquette, with his last win over MU in 2009 when Anderson was at the University of Missouri.

Heron has shot 43% from 3-point range and 91% from the free-throw line in the last three games. The 6-foot-5 guard has scored in double-digits in three of the Red Storm’s six BIG EAST games, including a team-high 18 points against Seton Hall Saturday.
L.J. Figueroa has averaged 15.4 points in conference competition and leads the league in steals with 2.3 per game. This season, he has recorded three or more steals in eight games.
Josh Roberts ranks sixth on the BIG EAST’s rebounding list with 6.7 per game and ranks fourth for offensive rebounding with 3.1 per game. The 6-foot-9 forward boasts a team-high 34 blocks and has contributed three or more blocks in seven games this season.
Howard not only leads the nation with 28.2 points per game, but he also paces the conference with 31.7 points in league games. Over the Golden Eagles’ past two wins, Howard has averaged 38.5 points, three rebounds and three assists. He moves to eighth place on the BIG EAST’s all-time scoring list with 1,260 points. He remains Marquette’s all-time leading scorer with 2,434 points prior to Tuesday’s game.
Koby McEwen was clutch down the stretch, scoring four of his six points in the final 10 seconds of the game. He went 4-for-4 under pressure to secure the win and also recorded a career-high nine assists.

Marquette: Sink the 3-point shot. The Golden Eagles rank first in the BIG EAST and seventh in the nation shooting 40% from beyond the arc. MU has made a league-best 178 threes this season, which is 9.9 per game. Howard, Sacar Anim and Brendan Bailey rank in the top 12 on the conference’s 3-point leaderboard.
St. John’s: Take advantage of Marquette’s ball-handling miscues. In the first half against Seton Hall, the Red Storm stole the ball 13 times and 11 of the Pirates’ 15 turnovers in the first half were steals. SJU’s 10.7 steals per game ranks third in the NCAAs, as the Red Storm’s Figueroa and Nick Rutherford pace the conference as the best in the league for stealing the ball.