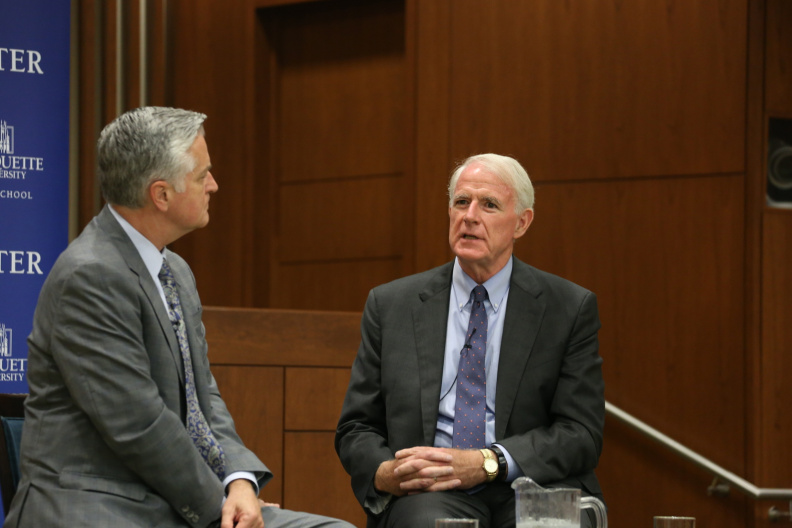 Mayor Tom Barrett spoke with host Mike Gousha at "On The Issues" in October.

Having served in the position since 2004, Mayor Tom Barrett is running in the 2020 mayoral election for a fifth term.

“As excited as I am about the great things that are going on, I’m more determined than ever to make sure that the successes we are experiencing spread throughout the city,” Barrett said.

For the 2020 election, Barrett said some key areas he is putting his attention toward include getting more family-supporting jobs into Milwaukee neighborhoods and focusing on early education. Barrett said careers in early education need to ensure proper training and adequate pay so that more individuals can go into the field of early education, thus investing in the future of Milwaukee citizens.

“My focus is very, very much on the future of the city,” Barrett said.

Part of looking at the future involves focusing on finding ways to be more sustainable, Barrett said. He said the city developed a sustainability plan in 2013 that it continues to follow, which includes reducing the fossil-based fuel energy on city buildings by 25% by the year 2025. He said the city’s three rivers that flow into Lake Michigan — the Milwaukee, the Menomonee and the Kinnickinnic — provide opportunities for positive economic activity like houses, businesses and parks, as well as environmental progress.

Barrett said cities like Portland, Oregon; Seattle, Washington; Vancouver, British Columbia; and Toronto, Ontario, can be looked at as examples for how it is possible to “combine strong economic growth with strong environmental sustainability initiatives.” Barrett said he thinks Milwaukee has the potential to grow in the coming decades to become one of the nation’s leading sustainable cities.

Another problem that faces Milwaukee, like many urban environments, is crime and safety. Barrett said he thinks it is important to fight crime by looking at its root causes. He said he aims to take “a public health approach to public safety” by recognizing that things like poverty, lack of educational opportunities and stress stemming from unemployment and a lack of jobs can lead to increased crime. Barrett said an important thing to focus on is going back to economics and finding ways to get more job opportunities that pay enough to support individuals and their families.

With four previous terms as mayor, Barrett said one area he would like to improve on is increasing the number of jobs in the central city. He said barriers to increasing jobs during his terms have included “a very hostile state government for the better part of the decade” at the same time as “the greatest recession since the Great Depression.”

One of the largest successes for the city, Barrett said, is its upcoming hosting of the 2020 Democratic National Convention.

The convention will bring Washington D.C.-level security to Milwaukee, Barrett said. He announced the security perimeter at a press conference last week and the city’s application for a $15 million dollar grant to cover security costs. Barrett said a lot of that money will flow out, but some will stay to economically impact the city.

Besides the increased security, Barrett emphasized the mass amounts of media coverage that the convention will bring to the city.

“We are going to have literally tens of thousands of journalists that are coming to Milwaukee, and for many of them, they’ve never been here before, so it’s an opportunity for us to paint the canvas,” Barrett said.

Barrett said increased focus on Milwaukee from the convention will bring additional revenue into the city, which he said will help address many of the poverty issues the city faces.

As incumbent, Barrett said he thinks he has a lot of experience and an understanding of the city.

“I think we’ve made a lot of progress. It’s not perfect — I’m never going to say it’s perfect. We can do more. We need to do more,” Barrett said. “I love to work with people, I love to get things done, and we’ve got a lot of things done and we want to continue to move the city forward.”

To campaign for reelection, Barrett said he took part in an “alcohol-free pub crawl.” For three to four weeks, Barrett said he travelled to various bars, coffee shops, diners and bowling alleys throughout the city to have conversations with Milwaukee residents and gather 1,000 nomination signatures.

Barrett said he individually gathered signatures when he was first starting out in politics and running for state legislature, but his grassroots approach is considered much more uncommon for a mayor representing hundreds of thousands of people running for reelection.

Zach Vornholt, one of Barrett’s campaign staffers, said this approach allowed members of the city to share their thoughts with Barrett, both positive and negative.

“If anybody wants to air any grievances that they have, he puts himself out there to have those conversations one-on-one,” Vornholt said.

For future campaigning, Barrett said he will have a variety of events throughout the city. He said he has always enjoyed getting out and talking with people.

This article is part of a Marquette Wire series featuring the candidates for Milwaukee’s 2020 mayoral election.