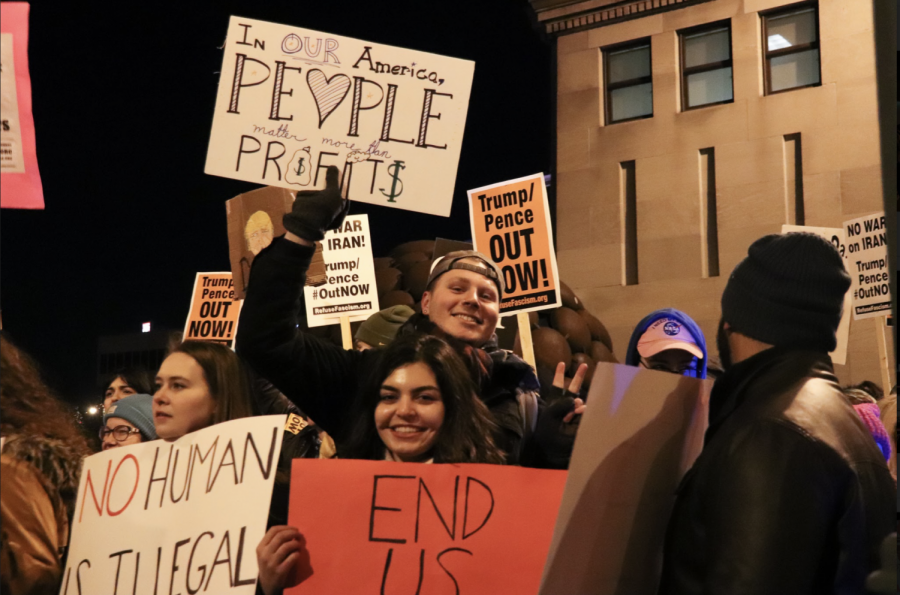 While President Donald Trump’s supporters packed the University of Wisconsin-Milwaukee Panther Arena awaiting his 7 p.m. speech on Jan. 14, his critics prepared to march in opposition just blocks away at Red Arrow Park. Some Marquette students were in attendence.

Among these protesters was Eric Rorholm, a senior in the College of Arts & Sciences and chair of Marquette College Democrats.

“I think, generally, Donald Trump has brought an unprecedented level of lowness to the presidency,” Rorholm said. “I believe democrats are looking for someone who can serve as a leader not just in terms of policy but of moral character as well.”

The anti-Trump protest was organized by the Coalition to March on the Democratic National Convention in addition to 12 other groups. According to its website, the coalition is an organization of “left and progressive forces” rallying for liberal ideals at the 2020 DNC in Milwaukee July 13-16.

Since being elected in 2016, Trump has operated under his “America First” platform which, according to his campaign website, consists of strengthening border security, repealing and replacing the Affordable Care Act, lowering taxes, deregulating the economy and reinforcing the military, among other goals.

In 2018, the U.S. Census Bureau reported the majority of Americans to be insured under private healthcare plans, meaning most do not utilize healthcare options provided by the government such as Medicare or Medicaid.

Critics of private healthcare in the U.S. point out its significant cost compared to other developed countries around the world. According to 2018 data from the Organisation for Economic Co-operation and Development, the U.S. spends more money on healthcare per capita than every other country of the OECD’s 36-member organization. Because of the substantial cost of healthcare in the U.S., some Americans support a government-funded universal healthcare option or a public alternative for those who want it.

As demonstrators departed from Red Arrow Park toward Panther Arena, the crowd chanted “Hey hey! Ho ho! Donald Trump has got to go!”

In recent weeks, Trump has become the third president in U.S. history to be impeached and to face a Senate trial. These developments come as the result of his alleged withholding of military aid from Ukraine.

In his speech Jan. 14, however, the president addressed his impeachment by calling the situation “a total hoax.”

The Senate impeachment trial of President Trump began Jan. 16 and is currently in progress.

Rorholm said Trump does not represent the country or Marquette’s diverse communities.

“(Trump) is not a leader who represents us and, ultimately, he’s not a leader that will ‘Be the Difference,'” Rorholm said. “We can’t just fight for corporations, people that look and sound like us or those who are angry for the same reasons.”

Several members of the protesting crowd were Marquette students.

“I think protesting is a great use of our (First) Amendment right to free speech because it gives everybody a fair voice and everyone gets to express how they feel,” Maddie Kuehn, a first-year student in the College of Arts & Sciences, said.

Another student in attendance, neither a protester nor a Trump supporter, said he came to witness the “democratic process in action.”

Reid Holben, a senior in the College of Arts & Sciences, said he isn’t the protesting type, although he fully endorses student activism and the right to assemble.

“I think our country would be better off if more people, especially young people, took an interest in politics,” Holben said. “Protesting allows for people to bring attention to issues personal and important to them.”

This story was written by Nicole Laudolff. She can be reached at nicole.laudolff@marquette.edu.