Women’s basketball bounces back against Xavier 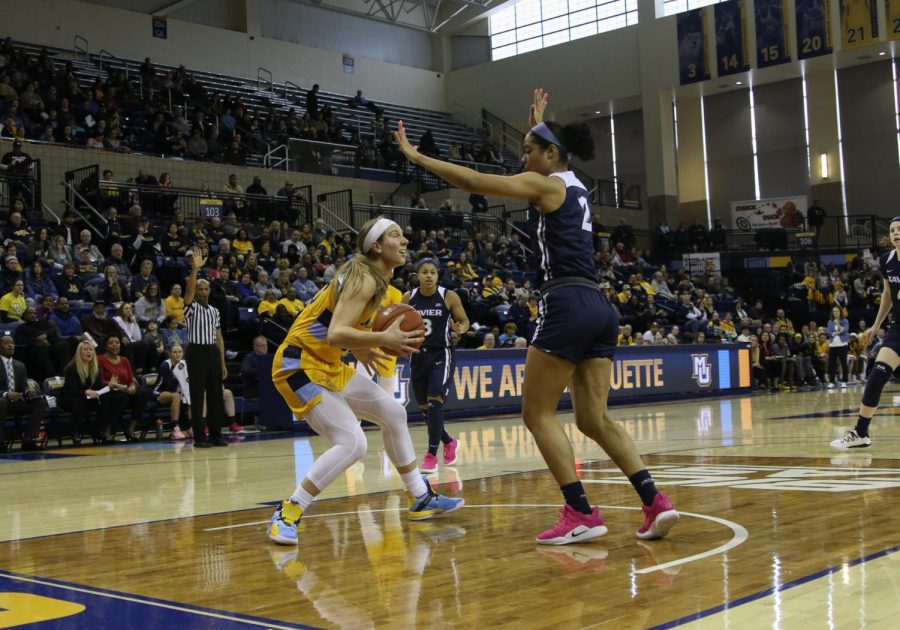 “Obviously very proud with a comeback win here (this afternoon),” senior guard Isabelle Spingola said to BIG EAST Digital Network’s Rich Hoyt and Mike Schmaltz. “We just have to keep it rolling and have good practices this week.”

Spingola’s performance played a key part in the Golden Eagles’ double-digit win. The Chicago native notched a season-high 20 points, 18 of which came from beyond the arc.

“It felt good to get back and get this win with the team,” Spingola said. “I would not have hit any of those shots without my guard’s finding me, so I just have to thank them for that.”

MU opened the first quarter on an 8-2 run thanks to big inside the paint performances from redshirt junior forward Lauren Van Kleunen and Spingola. The Golden Eagles held the Musketeers to just 7% from the field in the opening quarter.

Xavier’s four points allowed by Marquette in the first quarter this season.

Entering the second quarter with a 23-4 lead, the Golden Eagles showed some signs of struggles as MU was held to shooting 25% from the field and 14% from deep. They also committed five turnovers.

Despite outscoring Marquette 12-10 in the quarter, the Musketeers still found themselves down 33-16 at the half.

MU established its 3-point game in the third quarter. The Golden Eagles shot 80% from beyond the arc in the quarter alone, largely due to Spingola’s 3-for-3 shooting from 3-point range.

A 28-point lead entering the fourth quarter was all Megan Duffy’s team would need to cruise to its fourth BIG EAST win of the season.

MU also finished with 25 assists from 29 field goals. However, finishing with a high number of assists per field goals is not unusual for the Golden Eagles.

“That has been a big thing for us to get assists on our field goals this season,” Spingola said. “So to get 25 tonight, that is really good.”

Marquette now moves into a three-way tie with Seton Hall and St. John’s for third place in the BIG EAST standings. The Golden Eagles defeated both the Red Storm and the Pirates last weekend in Milwaukee.

The Golden Eagles outnumbered the Musketeers in every category on the afternoon. MU outrebounded Xavier 51-37 and held a 5-3 advantage in steals.

Marquette (13-5, 4-3 BIG EAST) will return home for a two-game homestand, beginning Friday against the Georgetown Hoyas at 11:30 a.m.