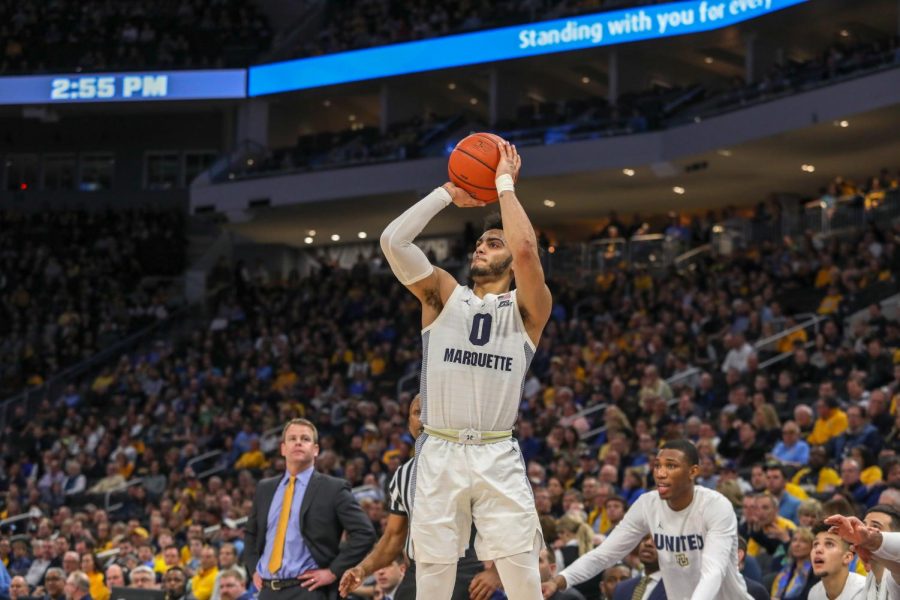 After beating Xavier handily Wednesday, Marquette traveled to the nation’s capital Saturday and picked up a big in-conference 84-80 victory against the Georgetown Hoyas.

It was a high-scoring battle throughout, as the teams went into halftime at a score of 42-36. Georgetown’s 7-foot center Omer Yurtseven was huge for the Hoyas, and the Golden Eagles had multiple players step up and put points on the board.

Markus Howard got a lot of shots up early, going 5-for-13 in the first half with 14 points. Sacar Anim joined Howard in double figures with fewer shots, as he was 5-for-7 from the field with 13 points.

Brendan Bailey and Jayce Johnson also both contributed on the offensive end, as Bailey had seven points and Johnson scored six in the paint. Koby McEwen did not score in the first but added six assists and three rebounds.

Despite the lead, the Golden Eagles faced the issue of foul trouble going into halftime, as both of their bigs in Johnson and Theo John, as well as Howard, all had two fouls.

Going into the second half foul trouble continued to be a problem, as with just under 12 minutes left in the game John picked up his fourth and Johnson picked up his third.

Georgetown had to worry about its own foul trouble, as their star big in Yurtseven got three quick fouls in the second half and picked up a fourth later on, forcing him to sit more than he expected to down the stretch.

Howard ended the game with an impressive 42 points on 14-for-31 shooting, with 28 of those points coming in the second half. He also added two rebounds and two assists.

Georgetown was led by 24 points from sophomore Mac McClung and 22 points from Yurtseven. The Hoyas also got double-figure scoring from Jamorko Pickett and Jagan Mosely, who both got multiple good looks from three.

McClung was fouled by Bailey while shooting a jumper with just ten seconds left in the game. The Hoyas were down by two, but McClung missed the first and made the second, leaving the Golden Eagles’ lead at one.

From there, the Hoyas intentionally fouled and Marquette was able to knock down the free throws to close out the game, despite the team going just 14-of-20 from the free-throw line, including four uncharacteristic misses from the line for Markus Howard.

One big factor in Marquette’s offense was the lack of turnovers. The Golden Eagles did not turn the ball over once from the eight-minute mark in the first half until just under three minutes to go in the second half. They had just six turnovers for the game.

With Marquette’s wins against Xavier and Georgetown this week, the Golden Eagles have evened their BIG EAST record at 3-3. Georgetown falls to 2-4.