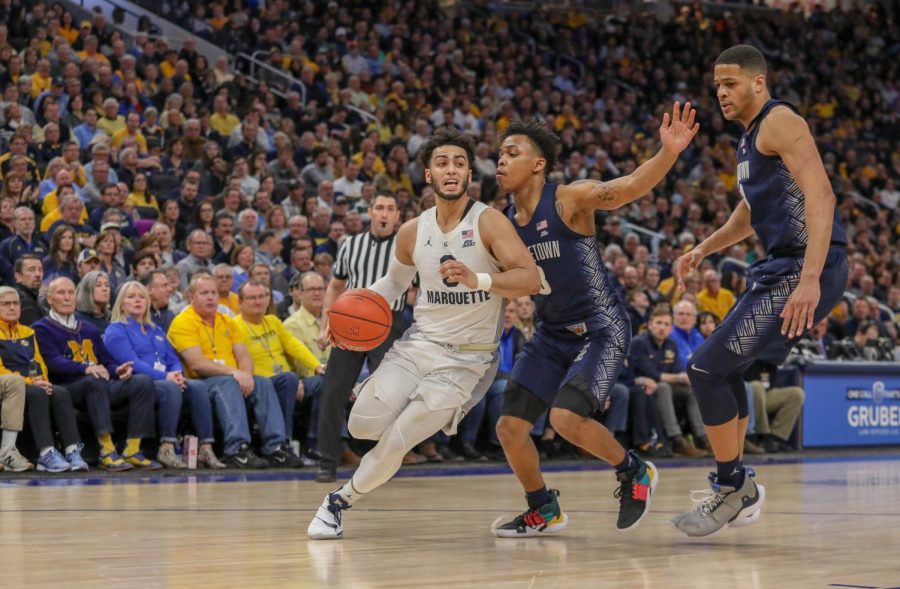 After a 20-point victory over Xavier Wednesday, Marquette heads to Washington D.C. Saturday to take on Georgetown at 1 p.m. Central Standard Time.

The Hoyas are tied with the Golden Eagles and Creighton Bluejays for fifth place in conference standings. According to the NCAA Evaluation Tool (NET) team sheet, Georgetown’s NET ranking is 48 and since the game is at Capital One Arena, Marquette will be a Quadrant Two opponent with a NET ranking of 35. The Hoyas have gone 4-2 this season in Quadrant Two matchups. Additionaly, GU is 9-2 at home this season.

However, the Hoyas are coming off a huge home win, upsetting Creighton 83-80 Wednesday, who was ranked No. 25 in the latest Associated Press Poll. Senior center Omer Yurtseven notched his ninth double-double of the season, leading the team with 20 points on 9-for-14 shooting and 13 rebounds. He also contributed two blocks and three assists. Sophomore guard Mac McClung finished with 19 points, 12 of which came in the second half, on 7-for-14 shooting. GU shot 52% from the field and combined for 18 assists.

Meanwhile, Marquette found success at Fiserv Forum, taking down the Xavier Musketeers 85-65 Wednesday night. Markus Howard scored a game-high 35 points with 19 coming before halftime. Besides Howard, the Golden Eagles found double-digit point contributions from three other starters. MU has held the Mustketeers under 40% shooting. Marquette is 9-0 when holding its opponent to under 40% from the field.

Georgetown lost four players from last year’s team that went 19-14 overall and 9-9 in conference play to graduation: Greg Malinowski, Jessie Govan, Kaleb Johnson and Trey Mourning. In the 2018-19 season, the Hoyas made the National Invitation Tournament, but lost 71-68 in the first round to Harvard. Govan was selected to the All-BIG EAST First Team in 2019, averaging 17.5 points and 7.5 rebounds per game. The 6-foot-10 center shot 50% from the field and 41% from 3-point range, while adding 41 blocks and 27 steals.

There was a lot of news surrounding the Hoyas after unanimous BIG EAST All-Freshman Team honoree and BIG EAST Freshman of the Year James Akinjo and fellow All-Freshman Team selection Josh LeBlanc were removed from the team. This season, Akinjo and averaged 13.4 points and three rebounds per seven games played. LeBlanc had added 7.2 points and 2.7 assists this season along with eight blocks. According to the report, LeBlanc and then-junior teammate Galen Alexander were on a temporary restraining order after complaints filed for allegations of burglary, sexual harassment and assault. Myron Gardner, a freshman on the team at the time, was reported to have sexually harassed and assaulted the plaintiff’s roommate the day before an alleged burglary. Neither LeBlanc, Alexander nor Gardner are listed on the roster. Akinjo later joined the transfer portal.

Meanwhile, Yurtseven returns after having redshirted last season due to NCAA transfer rules. He leads the Hoyas in scoring and rebounding and is shooting 52.6% this season from the floor. The 7-foot tall transfer was selected as one of 20 players on the Kareem Abdul-Jabbar Center of the Year Award Watch List and also the USBWA Oscar Robertson Trophy Watch List.

McClung, a BIG EAST All-Freshman Team honoree, also returns for his sophomore season. He leads the team with 22 steals and has a second-best 45 assists, along with averaging 16.1 points and 3.1 rebounds per game.

BIG EAST home teams are a combined 15-9 in conference games this season. The Golden Eagles have only lost one league game at home to Providence. The Hoyas have yet to lose to a conference school at Capital One Arena.
Georgetown ended 10-3 in nonconference play with losses to Penn State, Duke and University of North Carolina-Greensboro.
GU was picked below MU at sixth in the BIG EAST Coaches Poll.
Both teams will be wearing pregame shoot around shirts that say “We Cannot Walk Alone” to recognize the impact of Dr. Martin Luther King Jr. on national unity and social justice. The saying from the historic “I Have a Dream” speech reflects the BIG EAST’s honor to “develop programming and initiatives that support diverse and inclusive environments for student-athletes, coaches, staff and communities.” All teams competing this weekend will wear these shirts, which precedes the 25th anniversary of MLK Jr. Day Monday, a day that celebrates the civil rights leader’s life and legacy.
Georgetown leads the BIG EAST with 79 points per game and averages 82.5 points per game at home. Marquette is third in that category with 77.2 points per game.

This is the 28th matchup in the all-time series between the Golden Eagles and Hoyas. Twenty-six of those games have come since 2005-06, when MU joined the BIG EAST.
The programs met during the 1941-42 campaign and Georgetown edged Marquette 35-34. The next game occurred in the 1971-72 season with the Golden Eagles trouncing the Hoyas 88-44.
Marquette barely leads the all-time series 14-13, but Georgetown has the 7-4 advantage at home.
Last season, the teams split the series with both squads winning by one possession on each others’ home courts.
The Golden Eagles’ head coach Steve Wojciechowski is 5-5 all-time against the Hoyas. GU’s head coach Patrick Ewing is 1-3 against MU.

Yurtseven ranks in the conference’s top five in almost every statistical category: second with 4.38 offensive rebounds per game and fifth nationally, second with 9.6 rebounds per game, third with six defensive rebounds per game, tied for fifth with 16 points per game, tied for fourth for blocked shots with 2.1 per game.
McClung sits at seventh on the top scorer’s list with 16.1 points per game.
Mosely is ninth in the league for steals with 1.33 per game.
Howard is the BIG EAST and nation’s leading scorer with 27.3 points per game. His game-high 35 points against Xavier was the seventh time this season he hit the 30-point mark. He also leads the conference in free throw percentage, going 113-for-130, and paces the league for 3-pointers made with 66 this season, hitting 4.13 threes per game.
Besides breaking his three-game streak with less than 10 points, Anim also recorded a season-high eight rebounds. He ranks 20th for scoring with 12 points per game and seventh for 3-point percentage with 40% shooting from beyond the arc.

Marquette: Recently the Golden Eagles have been more aggressive, especially in their last game against Xavier as they won the rebound battle 46-30. Through BIG EAST games thus far, MU ranks second in the league with 12.8 offensive and 29.6 defensive rebounds per game. Five different players average nearly five per game.
Georgetown:  GU needs to defend the 3-point line, as they rank last in the conference holding their opponents to 36% shooting beyond the arc. Since the Hoyas pace the league with points per game, exploiting Marquette’s turnovers could turn into crucial points.