Matthews reflects on bond between brothers, return to Milwaukee 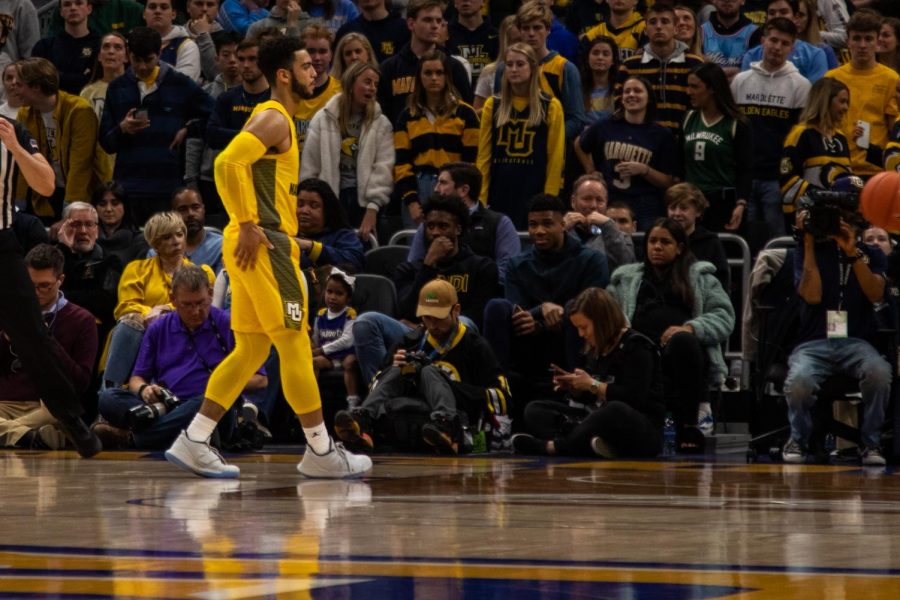 Marquette basketball alumnus Wesley Matthews walked into the interview room at Fiserv Forum not with his Milwaukee Bucks jersey, but instead with his toddler daughter, who repped his No. 23 throwback jersey.

“It’s pretty surreal right now,” Matthews said. “Seeing my grandma here, and she’s got the same jersey on that she wore when I was playing here and seeing my daughter here … everybody that was here when I played for Marquette — my family, my friends — are here again.”

The Golden Eagles honored Matthews before their Jan. 15 victory over Xavier, handing out bobbleheads of the Bucks’ starting guard for the first 7,500 fans.

Matthews signed a one-year deal with the Bucks in July 2019 and Wednesday, even teammate Giannis Antetokounmpo and Bucks head coach Mike Budenholzer made surprise appearances at Fiserv Forum for Matthews’ bobblehead celebration.

“Being home again and playing for the Bucks, (the) hometown team, being a block away from where a lot of memories were, it’s a pretty awesome feeling and for Marquette to do this for me, it’s humbling,” Matthews said.

While at Marquette, Matthews played three seasons under Tom Crean, and one with Buzz Williams. He finished his collegiate career with 1,673 points, 628 rebounds, 271 assists and 155 steals per 127 total games. Matthews shot 44% from the field, 34% from beyond the arc and 80% from the free-throw line. He is Marquette’s all-time free throws leader with 549 free throws made and ranks 10th in scoring.

The Madison, Wisconsin, native played for the Golden Eagles from 2005-09. After not being selected in the 2009 NBA Draft, Matthews joined the Utah Jazz for the Orlando Summer League and the Sacramento Kings for the Las Vegas Summer League. He eventually signed a one-year contract with the Jazz and in 2010 was named the Jazz’s starting shooting guard.

“I really felt like during that time I became a man, so to speak,” Matthews said. “Not only on the court, but off the court, Marquette really prepared us for life. For a life that we couldn’t understand, for a life that we couldn’t see. But when it got to the basketball court, trying to make a team in Utah, I wasn’t free of anything. When it got to dealing with people in a room and I have no idea who they are … because of what Marquette helped us do and grow as men off the court, I wasn’t afraid of anything.”

Over the past decade, Matthews has played for six different rosters — the Utah Jazz from 2009-10, the Portland Trail Blazers from 2010-15, the Dallas Mavericks from 2015-19, the New York Knicks from January-February 2019, the Indiana Pacers from February-July 2019 and finally in July 2019, Matthews agreed to return to the city where his basketball career began, signing with the Bucks.

Despite being so busy competing for the Bucks, Matthews said he occasionally watches the Golden Eagles. He made sure to tune in to the Jan. 4 Villanova-Marquette game along with teammate and former Wildcats guard Donte DiVincenzo.

“They play hard, and I love the style of play,” Matthews said.

Matthews said after Williams left Marquette, he felt he was in limbo because he didn’t know many people on the team anymore. The first thing current head coach Steve Wojciechowski did after he was hired, Matthews said, was reach out to alumni of the program like Matthews, Jimmy Butler, Dwyane Wade, Steve Novak and Travis Diener.

Just as Matthews loves what Wojciechowski brings to the program, the six-year head coach has just as much admiration for the former Golden Eagle.

“Wes is somebody you can point to in really every area of his life — whether it’s his basketball life,  whether it’s how he handles himself as a man, how he treats his family — you can hold him to our guys as an example of what you want a Marquette man to be like,” Wojciechowski said.

In terms of the relationship between Crean, Jerel McNeal, Dominic James and himself, Matthews said they are all still close. Matthews said when he goes out to Paris, Williams and himself will try to connect with another former Marquette player, Maurice Acker.

While Wojciechowski said most people believe basketball is the business of winning games, that’s not all he wants to accomplish.

“We also want to develop men. If we can develop men that are like a Wesley Matthews, basketball aside, then we’ll be really successful,” Wojciechowski said. “We have really good kids who are going to be great men in our locker room. … I don’t know if they’re all going to be as good as Wes as a player, because he’s so darn good, but I hope they grow to be the man he is when they’re his age.”

“It’s just a respect thing, and it’s kind of like everyone knows when you throw that Marquette jersey on, not much needs to be said. Take care of business,” Matthews said. “Those guys know they can reach out to us at any time, and we’ll be there.”

The 33-year-old is in his 10th season competing in the NBA and said he couldn’t imagine being anywhere but Milwaukee.

The Bucks currently hold the best record in the NBA at 39-6, sitting at the top of the Eastern Conference and the entire league.

“Not only is it just about being home, (but) being on a winning team, being on a great team, a team that has a chance to win the whole thing,” Matthews said. “To do it at home … there’s no better place to do it.”