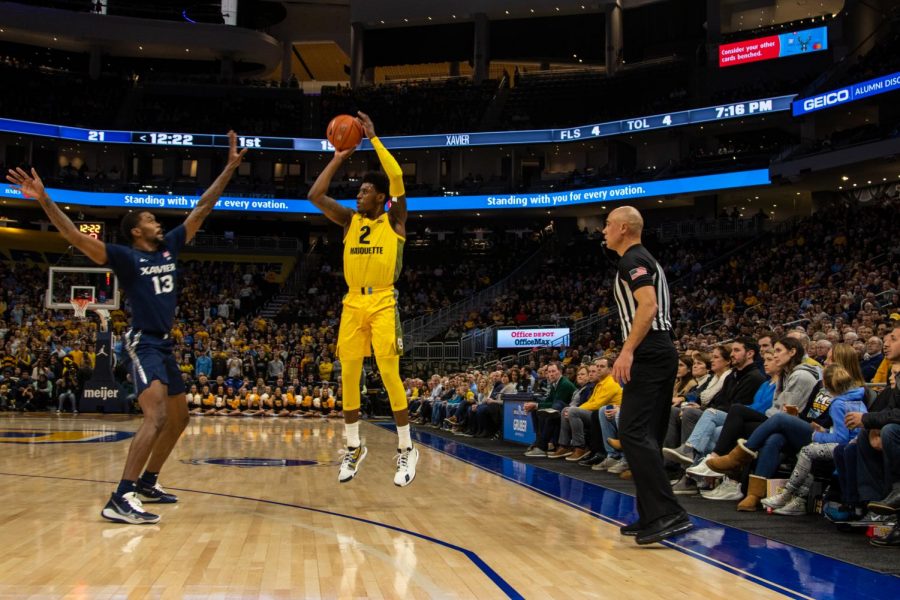 Following a two-game losing streak at the hands of Providence and Seton Hall, Marquette came out with an 85-65 victory over Xavier at Fiserv Forum Wednesday night. In a dominating fashion, the Golden Eagles improve to 2-3 in the BIG EAST.

In Marquette’s first game with the students back from winter break, the student sections were full, and the Golden Eagles thrived off the atmosphere en route to a convincing win. Here is a breakdown of the victory:
Game MVP
Alongside Markus Howard, Sacar Anim was a big contributor, making an impact both with scoring and rebounding. Marquette won the rebounding battle by 16, with a season-high eight rebounds coming from Anim. He also had 12 points, breaking his three-game streak of not reaching double figures. He was second-best for scoring on the team behind Howard’s 35 points.

Anim scored 10 points on 3-for-5 shooting in the first half, helping the Golden Eagles grow their lead going into halftime. He also played a key role defensively as he helped shut down the Musketeers’ second-leading scorer in the first half, Paul Scruggs, holding him to zero points.
Notes

The Golden Eagles were a perfect 13-for-13 from the free-throw line compared to Xavier’s 13-for-20.
The Musketeers’ Quentin Goodin went 0-for-8 from the field and is 0-for-15 going back to their game against Creighton.
Marquette held Xavier’s second-leading scorer Paul Scruggs, who averages 14.9 points per game, scoreless in the first half. He ended the game with 11 points on 4-for-10 shooting.
MU won the rebound battle 46-30 and scored 25 fast break points compared to Xavier’s nine.
The Golden Eagles shot 48% from the field compared to the Musketeers’ 36%. Xavier also shot just 24% from beyond the arc, with one of its best shooters in Kyky Tandy, going 1-for-8 from the field and 1-for-5 from three.

Quote of the night
“They got every single 50-50 ball. Every single one. It was a joke,” Xavier head coach Travis Steele said.
Injury update
Greg Elliott missed this game again with his ankle injury. His status remains game-to-game.

“I love Greg. My heart aches for him that he’s not out there,” Marquette head coach Steve Wojciechowski said. “He’s probably our most consistent sub, but we have to follow the lead of the doctors, and it’s just going to take a little bit of time before he gets the go-ahead.”

More notably, the team announced before the game Morrow is out indefinitely due to personal reasons. Wojciechowski couldn’t say a lot about Morrow after the game, but said “it’s hard to say” if the redshirt senior will be back this season.
Next up
The Golden Eagles (12-5, 2-3 BIG EAST) will travel to Washington, D.C., to face off with Patrick Ewing’s Georgetown Hoyas Saturday afternoon. The game will be at Capital One Arena, and tipoff is slated for 1 p.m.