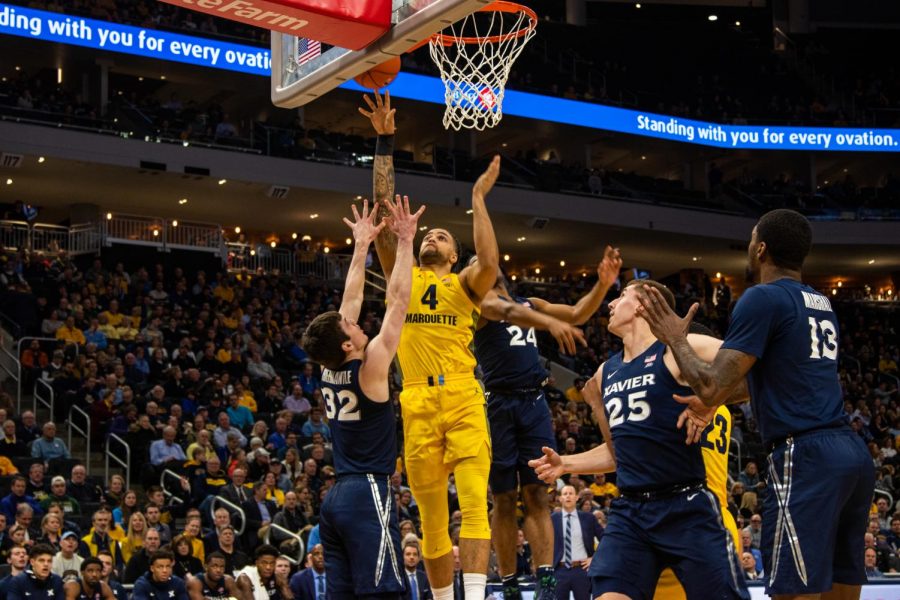 Theo John (4) scored 10 points and seven rebounds in the Golden Eagles 85-65 win over the Musketeers Wednesday.

On its worst four-game start since 2010, the Golden Eagles knew something needed to change.

“Our guys were ready to play,” Marquette head coach Steve Wojciechowski said. “Our guys appreciate how valuable each and every game is. We really prepared well and had a very business-like approach to the game. As a result of that preparation, our execution was really good.”

Those offensive adjustments were made in MU’s 85-65 victory over Xavier Wednesday night. Despite playing without Ed Morrow in the paint, the Golden Eagles dominated the rebounding battle.

“With the adversity we faced, it was really good for us to grow closer as a team,” senior guard Markus Howard said. “We look to just build off it. We know that our work is far from finished, and we’re just looking forward to coming back tomorrow and getting back to work.”

The win didn’t always look so promising as the Musketeers kept it close early. For the majority of the first half, Marquette had a single-digit lead. The Golden Eagles’ first substantial advantage was 10 points with 2:15 remaining in the opening half. MU extended that to 12 by halftime, holding Xavier to 37% shooting and 20% from the 3 in the first.

Playing in front of Marquette basketball alumnus Wesley Matthews, Milwaukee Bucks teammates Giannis Antetokounmpo and Donte DiVincenzo, and coach Mike Budenholzer, Marquette had all the confidence heading into halftime with a 44-32 lead.

But it was after the break when the Golden Eagles’ offense went off. They contained the Musketeers to no points in almost a five-minute span.

MU started on a 15-0 run after halftime. The nation’s leading scorer came out of the locker room hot as he scored 11, on 4-for-8 shooting, of Marquette’s first 15 points in the second half.

“We wanted to come out strong in the second half,” Howard said. “It wasn’t just me — our whole team had that mindset of wanting to be in attack mode on both ends. The run came from getting stops and getting run-outs in transition. That’s some great credit from our guys to really have a locked-in mindset coming into the second half.”

Marquette possessed its biggest lead at the 10:15 mark, leading 66-43. Though the Musketeers broke into that deficit a bit, at the under-eight timeout Marquette was still shooting 46% in the second half and held Xavier to 3-for-15 shooting from 3-point range.

Howard finished with a game-high 35 points on 12-for-27 shooting and five 3-pointers. He also added four rebounds and four assists.

Sacar Anim added 12 points and a season-high eight rebounds. However, it was the two bigs, Jayce Johnson and Theo John, who combined for 15 boards. For the first time in 2020, John hit the 10-point mark.

“Those guys had great activity and came up with extra possessions,” Wojciechowski said. “When those guys are playing with that type of liveliness, it’s contagious. Sacar was as good as he’s been going to the offensive glass.”

MU finished with 17 second-chance points. Because of the depth in the BIG EAST this season, Wojciechowski said there are no “little things” that will win games.

“Getting second-chance points, second-chance opportunities, those are big things,” Wojciechowski said. “Theo and Jayce did a great job setting the tone for us in that respect against an outstanding rebounding team.”

“It’s hard to win games when you lose on the glass like that,” Jones said.

Once again it was the Golden Eagles’ defense that forced the Musketeers out of their offensive game. Xavier combined for 36% shooting from the field, and the Musketeers were 6-for-25 from deep and 13-for-20 from the free-throw line.

“They were more physical. (They) won the battle on the glass,” Xavier head coach Travis Steele said. “We couldn’t even get open where we wanted to get open. We were getting knocked off our spot in the post, on the perimeter, on drives. They were clearly the tougher team tonight.”

“Patrick (Ewing) has done a great job there and really developing a team that had a little adversity earlier in the season,” Wojciechowski said. “They’re playing well. I was told they beat a great team (Creighton) that beat our butts. We’ll have our hands full, no doubt about that.”