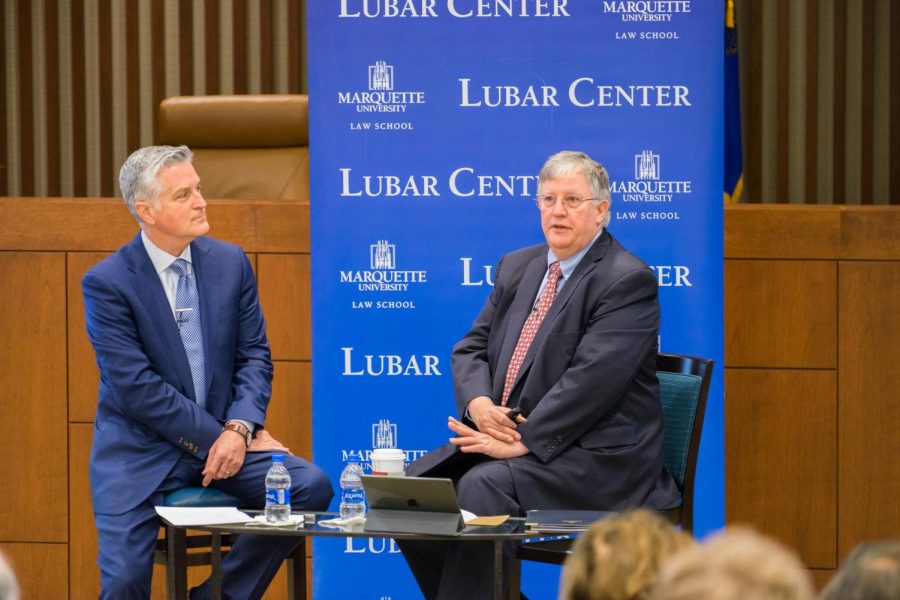 The results of the poll were discussed during "On the Issues" with Mike Gousha.

President Donald Trump’s job approval has not seen much change following the United States drone attack that killed Iranian Gen. Qasem Soleimani and the House of Representatives’ vote to impeach Trump, according to latest results from the Marquette University Law School poll.

The poll was presented by law and public policy fellow Mike Gousha and poll director Charles Franklin at “On the Issues with Mike Gousha” in the Eckstein Hall Lubar Center Jan. 15. The poll was conducted Jan. 8-12. It included 800 registered Wisconsin voters polled by cellphone or landline, with a plus or minus 4.1% margin of error.

Despite the decreased disapproval rating, Wisconsin voters do not feel favorably on Trump’s handling of foreign policy. Forty-four percent of voters approved, while 53% disapproved and 2% did not know.

The potential of a serious military conflict between Iran and the United States was also discussed in the poll. Thirty percent said a major conflict is likely and 8% said they did not know.

Views about Trump’s actions in Ukraine have also not changed much following the House of Representatives vote to impeach. Forty percent of voters feel Trump did something seriously wrong in his actions with Ukraine, 14% said he did something wrong but not seriously, 37% say he did nothing wrong and 9% did not know.

In the December poll, 40% were in favor of impeachment, while 52% opposed.

The general election matchups with Democratic candidates versus Trump indicate a close race, with each comparison within the margin of error.

Voters were also asked about Governor Tony Ever’s job in office. His job approval is 51%, with disapproval at 40%.

Whether tariffs hurt the U.S. economy was also questioned. Thirty-two percent said tariffs help the economy and 24% said they don’t make any difference.

Opinions on relations with North Korea and the United States has not changed much since October. Sixty-five percent say they do not expect the United States to reach an agreement on reducing nuclear weapons within the next year or two, down 1% from 66% in October.

More than half of voters say you cannot trust the government to do what’s right. Twenty-six percent said they strongly agreed with that statement, while 38% somewhat agreed.

Wisconsin voters were also asked to discuss issues particular to the state, such as Foxconn and satisfaction with public schools. Almost half of voters say that Foxconn is not worth the cost, with 46% believing the state is paying more than the plant is worth.

Satisfaction with public schools has a majority in the state, with 15% being very satisfied and 44% being satisfied. More than half of voters also feel it is more important to increase spending on public schools than to reduce property taxes.

Seventy percent of Wisconsin voters favor Wisconsin’s law allowing residents to obtain a license to carry a concealed handgun. This result is up from 2016 when 63% favored. The law, which went into effect in 2011, was more contentious when polled in 2012. A 2012 Marquette Law School poll conducted April 26-29 showed 47% of voters approving and 50% disapproving.