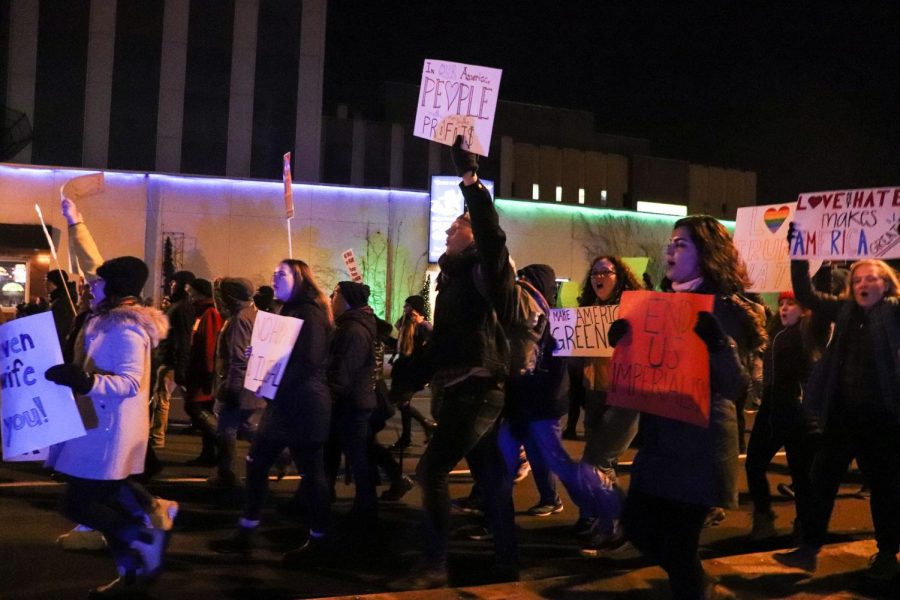 Trump's rally was held in the UW-Milwaukee Panther Arena while a counter protest was led outside.

Hundreds flocked to University of Wisconsin-Milwaukee Panther Arena last night where a Trump rally was in full swing. Supporters of the president packed the building awaiting a 7 p.m. speech by Donald Trump himself while his critics convened at Red Arrow Park for a counter protest and march to the arena.

In his speech, the president covered a wide variety of topics, including but not limited to impeachment, the economy and the recent U.S. missile strike which resulted in the death of Iranian general Qasem Soleimani.

Trump also discussed the implementation of the United States Mexico Canada Agreement. The trade deal is a renegotiation of the existing North American Federal Trade Agreement which Trump proclaimed “one of the worst trade deals in the history of the world.”

Although the USMCA has been signed by all three countries involved, it has yet to be ratified into by each country’s legislature.

Yesterday’s rally marks the president’s first visit to Wisconsin in 2020 and the seventh time since entering office. In the 2016 election, Trump narrowly won Wisconsin over Democratic opponent, Hillary Clinton, who did not campaign in the state.

Luke Holub, a sophomore in the College of Engineering, attended the rally.

“I feel like President Trump is (keeping our country safe). My whole family are big Trump supporters,” he said.

Holub said he feels there is a lot of hostility across party lines and believes both parties should respect the other’s views.

The anti-Trump protest held just a few blocks away from the arena was lead by the Coalition to March on the DNC and 14 other groups. According to its website, the Coalition is an organization of “left and progressive forces,” rallying for liberal ideals at the 2020 Democratic Nation Convention.

Among these protesters were numerous Marquette students.

“I think protesting is a great use of our (first) amendment right to free speech because it gives everybody a fair voice and everyone gets to express how they feel,” Maddie Kuehn, first-year student in the College of Arts & Sciences, said.

This story was written by Nicole Laudolf and Shir Bloch. They can be reached at nicole.laudolff@marquette.edu and shir.bloch@marquette.edu.