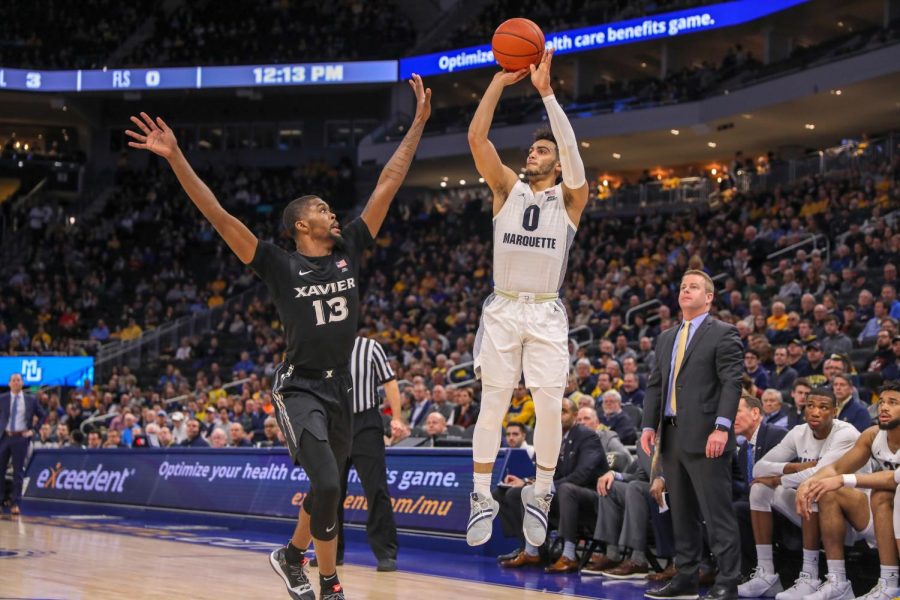 The Musketeers are tied with MU for seventh in the conference as both teams are on a two-game losing streak. Head coach Travis Steele’s team is 1-2 when on the road this season. Xavier has dropped its last two games to Seton Hall and Creighton, the two teams Marquette has fallen to as well. According to the NCAA Evaluation Tool (NET) team sheet, the Musketeers NET ranking is 56 and Xavier has gone 1-3 this season against Quadrant One opponents. Since the game is at Fiserv Forum, this will be the Golden Eagles’ fourth Quadrant Two opponent this season. They have gone 3-0 against Quadrant Two opponents.

The Musketeers are coming off a 77-65 loss to Creighton, who is now ranked No. 25 in the latest Associated Press Poll. Despite juniors Naji Marshall and Paul Scruggs’ combined 40 points, Xavier was unable to complete the comeback victory. The Musketeers shot 3-for-17 from beyond 3-point range in the first half, but scored 38 points in the second half on 43% shooting. Marshall was just short of a double-double with nine rebounds and seven assists in 36 minutes.

Meanwhile, Marquette fell 69-55 Saturday to the Seton Hall Pirates. In the highly-touted matchup between seniors Markus Howard and Myles Powell, it was Howard who came out on top with a game-high 27 points. Eighteen of his 27 points came in the first half, but it was the Golden Eagles’ mere 19% shooting in the second half that handed Seton Hall its fourth consecutive win. However, Howard now has 1,183 points in BIG EAST play, climbing to 11th on the all-time list, passing Butler’s Kelan Martin and Georgetown’s D’Vauntes Smith-Rivera. The Chandler, Arizona, native now has the highest total of any player from a current league team.

Xavier lost five players from last year’s team that went 19-16 overall and 9-9 in conference play: Kyle Castlin, Ryan Welage and Zach Hankins to graduation, Elias Harden to transfer and A.J. Fraizer. In the 2018-19 season, the Musketeers made the National Invitation Tournament, but lost 78-76 in overtime at Texas in the second round. Hankins lead XU shooting 69% from the field, but also averaged 10.6 points and 5.3 rebounds per game and had a team-high 53 blocks. Welage averaged 6.7 points per game, but shot 42% from 3-point range and a team-best 80% from the charity stripe.

The Musketeers return four of their top five scorers from last season: Marshall, Scruggs, Tyrique Jones and Quentin Goodin. Marshall, a Preseason First Team All-BIG EAST selection, was also chosen to the Watch Lists for the 2020 Wendy’s Wooden Award, 2020 Citizen Naismith Trophy and 2020 Julius Erving Award for the top small forward in the country. Scruggs is second on the team in scoring and has scored in double figures 14 times this season. In the last two games, Scruggs has averaged 18 points, seven rebounds, 2.5 assists, 1.5 steals and is shooting 67% percent from the field and 4-for-4 from three.

After initially declaring for the NBA Draft, Jones decided to return for his senior season. He averages nearly a double-double with 13.5 points and 9.8 rebounds per game, and could be the first player to do so since 2002-03 National Player of the Year David West. Jones is on the Watch List for the 2020 Karl Malone Power Forward of the Year Award. Goodin, who is in his last season, has 961 career points and 520 career assists, as he is 30 assists shy of third on the all-time assist list. Goodin averages a team-high 4.1 assists per game this season, which marks sixth in the league and he is trying to become the second player aside from Gary Lumpkin to lead Xavier in assists for four consecutive seasons.

Xavier gained graduate transfers Bryce Moore and Jason Carter, along with four first-year players: Daniel Ramsey, Dieonte Miles, Kyky Tandy and Zach Freemantle. Carter has 958 career points with 836 of them coming at Ohio and contributed 14 points against Seton Hall, which was his second-best. Carter has started 16 games. Tandy hit four 3-pointers in his team’s victory Jan. 5 against St. John’s for a career-high 12 points in 22 minutes. Freemantle adds 6.1 points and 3.5 rebounds per game as he plays in 15.8 minutes per game.
Fun Facts

Xavier’s two nonconference losses came against Florida and Wake Forest. They ended 11-2 prior to BIG EAST play.
In August, the Musketeers went 3-0 on their 2019 Spain Tour.
XU was picked right above MU at third in the BIG EAST Coaches Poll.
A national program, Jesuit Basketball Spotlight, brings awareness of Jesuit education by highlighting the country’s 27 Jesuit colleges and universities’ basketball games. This game will be a spotlight game between two Jesuit universities.
Steele signed three 4-star recruits guards Colby Jones, Down Odom and C.J. Wilcher. According to 247Sports, Xavier’s recruiting class is ranked No. 9 in the country.
With the Golden Eagles’ overtime loss to Providence Jan. 7, they snapped their streak of 10 consecutive overtime wins, which dated back to 2015-16. Three of the last 11 overtime games for MU have come against Providence.

The series dates back to the 1958-59 season as this is the 76th matchup between the two teams.
Marquette leads the all-time series 51-24 and has the 28-8 advantage in Milwaukee, but Xavier has won nine of the last 14 games since joining the BIG EAST in 2013-14.
MU dominated the series during the Al McGuire and Hank Raymonds era and at one point had won 26 consecutive games between 1969 and 1983.
The teams met in the NCAA Tournament in 2010-11, with the Golden Eagles acclaiming the 66-55 win. MU went on that year to make the Sweet 16.
Marquette head coach Steve Wojciechowski is 4-7 all-time against Xavier.

Marshall ranks fifth in the BIG EAST with 16.8 points per game and is 15th with 1.3 steals per game. He became the 54th player to reach 1,000 career points during the Seton Hall game Jan. 8 and with 1,024 points is third on the Musketeers’ all-time list.
Jones paces the league with 67 offensive rebounds, averaging 3.94 offensive rebounds per game and is second in the conference with 9.8 rebounds per game. He is seven points shy of 1,000.
Scruggs comes in at 11th in the league with 14.9 points and eighth with 1.46 steals per game.
Howard is the nation’s leading scorer with 26.8 points per game. His game-high 27 points against Seton Hall marks the ninth time this season and 57th time in his career that he has reached the 20-point threshold. He also leads the conference in 3-pointers made with 61 this season, hitting 4.07 3-pointers per game.
Theo John makes his way into fourth on the BIG EAST’s list for top shot blockers. He averages 1.88 blocks per game.

Marquette: Utilize the Golden Eagles’ 3-point game, which ranks first in the BIG EAST shooting 40% and holding opponents to 29.4% from deep. Keep being aggressive on the boards, as MU paces the conference with 30 defensive rebounds per game.
Xavier: Play solid defense for all 40 minutes, as the Musketeers rank third for scoring defense with 66.1 points per game and hold opponents to 28.9% shooting from beyond the arc. Take advantage of shooting down low, going 43% from the field this season.