EDITORIAL: Provost Ah Yun’s statements not consistent with past actions 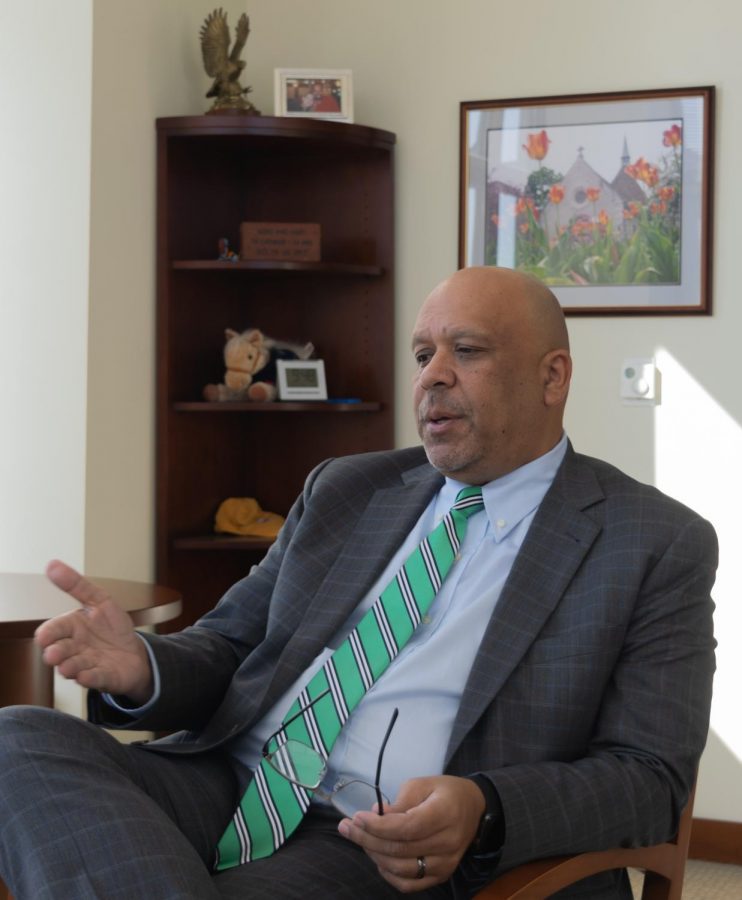 After stepping in as permanent provost and executive vice president for academic affairs last month, Kimo Ah Yun highlighted areas he will focus on in his positions. But many of his statements do not align with his past actions.

Ah Yun identified five areas: transparency, diversity, rigor to the student experience, academic leadership and challenges to higher education. Having served as acting provost for just more than a year, Ah Yun and other administrators received criticism from students, staff and faculty for the university’s recent lack of transparency.

As a key leader at Marquette, Ah Yun needs to proactively make transparency a core element of university decisions rather than a response to criticisms.

The then-acting provost faced significant transparency issues at the start of last semester after the university updated its demonstration policy without taking the necessary steps to include and inform the Marquette community regarding its decisions.

The policy outlines an approval process that students, faculty and staff must follow before holding a demonstration on campus. In August 2019, the university added faculty and staff to the policy as it previously only addressed student protests.

The update was announced in a university news release. In the two weeks after the update, the university claimed the policy did not require permission to demonstrate, released four different demonstration policy documents with wording changes and received backlash from more than 100 university faculty members in an open letter.

Only after facing criticism from the community did the university decide to reexamine the policy and include students, faculty and staff in possible revisions.

Ah Yun was further criticized for his handling of potential changes to the College of Education.

In a Sept. 5, 2019, email to campus, University President Michael Lovell announced the university cut 2.5% of its employees as part of a cost management review process. In that same email, the president listed additional changes, including a point that the College of Education’s structure would be “evaluated through an inclusive process aimed at achieving new efficiencies.”

The email did not provide further context, and College of Education faculty, staff and students had not been informed of any possible changes. One week later, Ah Yun met with College of Education faculty and told them for the first time that their college was facing a $1 million deficit and potential structural changes. The meeting was not openly disclosed to the campus community.

In the aftermath of the meeting, a group of nearly 10 faculty members decided to form an internal committee dedicated to investigating the sources of the university’s deficit calculation.

In lieu of informing and including College of Education students and staff regarding the significant challenges their college was facing, the university merely mentioned ambiguous changes in the president’s email before Ah Yun surprised faculty with news of the deficit.

Another area where transparency lacked was in the elimination of the ombuds office, which provided a resource for faculty and staff to receive confidential support for concerns. The provost and other university leaders failed to openly communicate the decision with the community.

Following the office’s elimination, the Committee on Diversity and Equity issued a memorandum urging university leadership to reconsider its decision after faculty members voiced concerns about losing the resource. It is unclear whether the university will reconsider the decision.

According to the Dec. 2 university news release, Ah Yun said his vision as permanent provost includes “unifying the campus community under a transparent and clearly understood system of shared governance.”

To grow a campus that values free speech and trust within the community, the provost must stand by his statement and move away from his past actions, which demonstrate a pattern of providing transparency only in hindsight and failing to include all campus voices.

The provost has demonstrated a focus on diversity in the past through his involvement with campus organizations such as I’m First, which offers support for first-generation students, as well as the cluster hire for the Race, Ethnic and Indigenous Studies program, in which faculty members with diverse backgrounds were hired to provide more courses related to race, ethnic and indigenous topics across multiple departments.

However, there is immense room to grow in terms of diversity. While the provost has acknowledged this gap, stating in the Dec. 2 news release that “diversity isn’t a goal to be achieved … it’s an evolving pursuit,” the university has not made sufficient strides.

According to a news story, students of color continue to experience significantly lower retention rates than white students. Though recent diversity initiatives such as RISE and Mi Casa es tu Casa have benefited incoming students, upperclassmen students of color at Marquette are left without the same support.

Similarly, there has not been a significant effort by the university to increase hiring or retention of faculty of color. This was an issue voiced at the President’s Panel on Diversity, Equity, and Inclusion, held Feb. 26, 2019.

In addition to the lack of faculty of color, since the panel, Ah Yun and other university leaders have not moved forward regarding other concerns, including forming a task force to review representation on campus and providing bias training for all students.

In the Dec. 2 news release, Ah Yun said he will focus on “attracting and retaining diverse students and faculty and creating an inclusive campus environment.”

To move forward with this goal, it is necessary for the provost to address a wider expanse of diversity concerns in addition to the programs he has helped develop.

Past the five areas that he outlined, Ah Yun and the university need to bridge the relationship between the university provost and students. The Marquette Wire previously reported that when asked, several students did not know who Ah Yun is or what a provost does.

This lack of awareness is unacceptable for a position that holds such importance on campus. Ah Yun must take steps to become a campus-wide figure and engage with the everyday student.