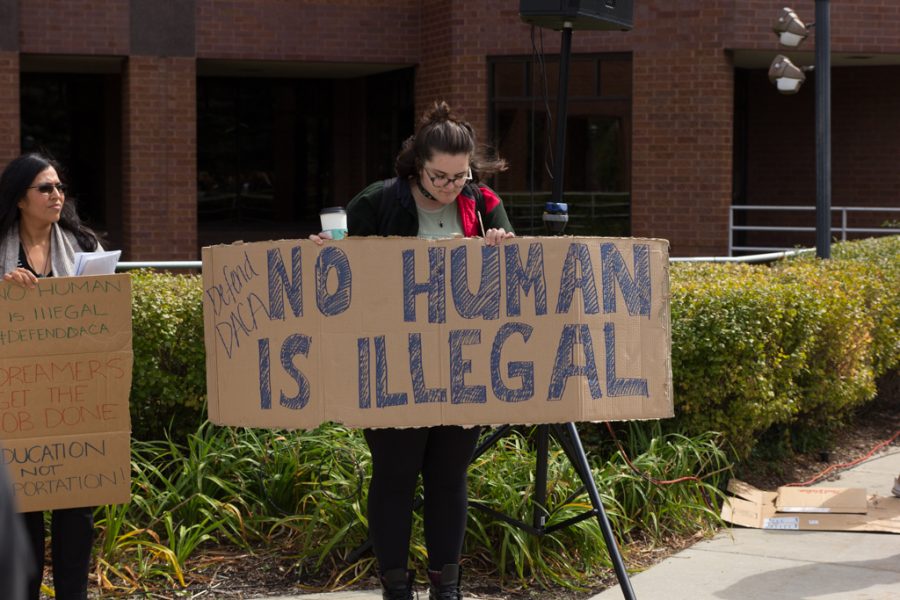 Members of the Marquette community organized a demonstration in support of DACA in September 2017.

It’s a cold day as cars pass by and snow falls gently on the pavement. Groups of students battle the brisk Milwaukee winds while rushing to class. Among them is Jonathan Irias, a junior in the College of Arts & Sciences. Though he is a student just like his fellow class-goers, Irias is separated from his peers in that he is not sure if he will be able to remain in the U.S. after graduation.

Irias came to the United States from Guatemala when he was six years old. He is a member of the Deferred Action for Childhood Arrivals program.

DACA is an immigration program that grants individuals who were illegally brought to the United States as children a renewable two-year period of deference from deportation and eventual eligibility for a work permit.

In 2017 current President Donald Trump announced his intention to dissolve the DACA program. Nearly three years later, the case has now made its way to the U.S. Supreme Court, where justices will vote on whether the Trump administration can legally end DACA.

After the supreme court heard an oral argument in November 2019, Marquette sent out a news release expressing its support of DACA students.

“We anticipate that the Court will likely issue its decision close to the end of June 2020, but it could come as early as January 2020 — and the exact timing is difficult to predict,” according to the National Immigration Law Center.

Irias said a decision to abolish it could have effects that span much further than the classroom.

“There is a certain uncertainty to what my future holds. I’m in school and trying my hardest and just competing just as everybody else is, but as soon as I graduate, my DACA expires,” Irias said.

Irias said he doesn’t feel genuine support from the administration or students at the university.

“I can’t say I’ve ever felt supported by the university for being an undocumented student, as far as at an administrative level (and) because what I experience every day (from) students,” Irias said. “So if I live with this idea that, yup, there are students here that don’t welcome me here in this community, I don’t know how to deal with that.”

In the midst of a potential congressional decision about his future, Irias said he has attended multiple protests on campus and in Milwaukee. He said he wants people to understand DACA recipient’s perspectives.

Sergio González, assistant professor of Latinx Studies said he thinks the handling of the DACA program sheds light on some of the immigration problems found in the United States.

“DACA is a perfect encapsulation of how ludicrous some of our countries’ immigration policies are,” González said. “Fundamentally, you have a group of people who for the last few years have done everything that they have been asked to do, and to have the rug pulled out from under them either because a specific administration feels like that program should be ended or because Congress refuses to act on a permanent solution is a terrible disservice to those students.”

Gonzalez said no institution in the country is doing right for DACA students and undocumented communities, including Marquette.

“I think in 2019, most higher education institutions do a really good job of voicing support for undocumented students, as they do for other marginalized populations on campus,” Gonzalez said. “The question then becomes whether or not institutions like Marquette are willing to put the resources forward necessary to actually stand by undocumented and DACA students.”

Alberto Jose Maldonado, executive director of the Roberto Hernandez Center and co-founder of the Undocumented Student Task Force at the University of Wisconsin-Milwaukee, said there have been troubles getting funding from UWM.

“We recently had budget cuts. The system itself has been suffering from those, and those trickle down to us, but that has not diminished the energy and the efforts that we put together here,” Maldonado said.

Maldonado said in order to support the DACA program, it is important that administrators express their needs. He also acknowledged the political implications of the DACA program.

“It’s always going to be a partisan divide. It’s our job as educators as allies to make sure that folks have the right information,” he said.

Irias said the 2016 election, in which President Trump won, had numerous implications for him and other DACA students.

“It was a coming of age moment,” Irias said. “I had just received DACA and to hear at the time the presidential candidate be like, ‘I don’t support it, I don’t stand for it’ … when (Donald Trump) became president, (he) essentially said, ‘You are not welcomed here. We don’t want you here.’”

This story was written by Beck Andrew Salgado. He can be reached at beck.salgado@marquette.edu.