University ahead of pace for enrollment goal for Class of 2024 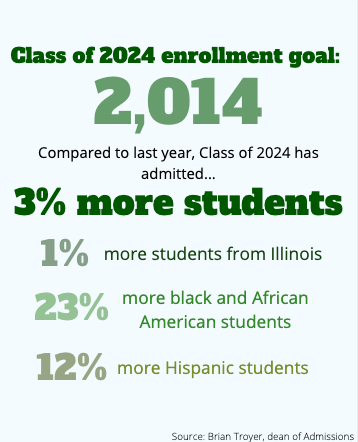 Marquette University has admitted 3% more students for the Class of 2024 than it had at this time last year, Brian Troyer, dean of undergraduate admissions, said.

The university also received 2% more applications for the Class of 2024, making for a total of nearly 15,000, Troyer said.

The university’s goal for the number of enrolled students for the Class of 2024 is 2,014.

“We are ahead of the pace we feel like we would need to be at to meet that goal,” Troyer said. “We are exceeding expectations when it comes to the number of students we are admitting and we are doing it with a very academically talented … class.”

Enrollment for the Class of 2023 was 1,975, 225 less than the Class of 2022. The university has been anticipating a decrease in enrollment beginning in 2026 due to demographic changes, an emailed August letter from Marquette University President Michael Lovell said.

The university has taken measures to combat the upcoming financial challenges, including laying off 2.5% of Marquette employees in September and considering a potential merge for the College of Education.

Marquette went test optional in June, allowing applicants to decide whether to include standardized test scores in their applications. Troyer said the university expected about 15-25% of students to apply test optional. So far 18% have chosen to apply with that option.

He also said the university has seen a half point increase in the average ACT scores of admitted students, while SAT scores have remained the same.

The university has also admitted 1% more students from Illinois than last year. Illinois remains the largest state with applicants to Marquette, with about 6,700 applications for the Class of 2024 are from Illinois, Troyer said.

Wisconsin has also seen an increase, with 6% more applicants. There are about 3,200 applicants from Wisconsin, Troyer said.

In terms of individual colleges, Troyer said some colleges have received more interest than others. The College of Arts & Sciences remains the most popular and has currently admitted 244 more students than last year.

The College of Nursing has also admitted its goal for students this year.

“The demand for a Marquette nursing education continues to grow,” Janet Wessel Krejci, dean of the College of Nursing, said in an email. “We have expanded both in undergraduate and graduate programs over the past several years.”

Troyer said the university has been surprised at the growing interest in the College of Health Sciences and also mentioned the strength in the college’s recruitment.

Between 2014 and 2018, the college added 300 additional students to their first-year classes, William Cullinan, dean of the College of Health Sciences, said.

The College of Education is ahead of pace, as well, he said.

There has also been a 23% increase in black and African American students and a 12% increase in Hispanic students over last year.

First-generation students make up more than 20% of applicants to Marquette for this year.

Troyer said although numbers for admitted students are higher, it does not necessarily mean higher numbers of students will come to the university. He said during the spring it is important for admissions to engage with potential students for next year.

“Just because we have admitted more and feel really good about the overall quality of the class, we don’t know that these students are going to come,” Troyer said.

He said this distinction is increasingly important, as the number of applications to multiple colleges has increased in recent years.

Strategies include events such as Admitted Students Day in April, which has a high yield rate in terms of students committing to Marquette.

Troyer also said the university has a very active social media in terms of admissions, engaging students through the admitted student Facebook page, along with other avenues such as Twitter.