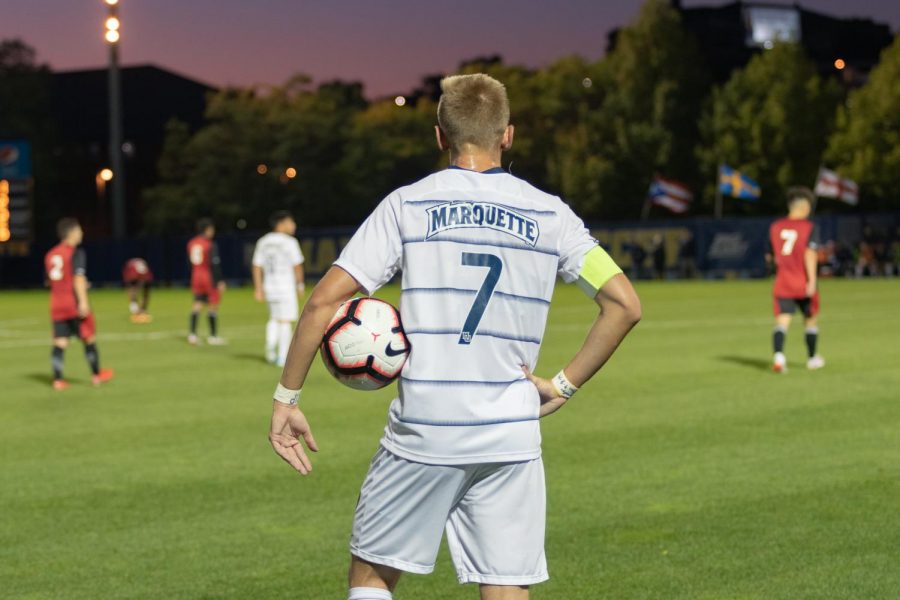 Defender Patrick Seagrist (7) was a two-time All-BIG EAST First Team selection and led Marquette and the conference with seven assists.

Seagrist and Prpa become the sixth and seventh Marquette players to be drafted to the MLS in program history and over the last eight years.

Seagrist was selected 10th overall in the first round by the New York Red Bulls. The Red Bulls traded $100,000 in general allocation money to the Chicago Fire Football Club to acquire the 10th pick. Seagrist becomes the highest-drafted Marquette player of all time.

Prpa was selected 34th overall in the second round by the Houston Dynamo.

During their four years at Marquette, both Seagrist and Prpa played crucial roles in leading Marquette to the BIG EAST Tournament the last two seasons and the 2018 BIG EAST Championship Final.

“It’s an exciting time for these seniors who have worked their tails off over the course of their collegiate careers to get to this point,” Marquette head coach Louis Bennett said in a statement. “Having the opportunity to be drafted and play professional soccer is one that should be cherished and celebrated.”

Seagrist’s collegiate resume includes two selections to the All-BIG EAST First Team, starting in 63 of 65 games played and 28 career points. This season, the Streamwood, Illinois, native finished first on the team and second in the BIG EAST Conference with seven assists.

Prpa started in 14 of the 15 games he played this season despite battling an injury. Throughout his time at MU, Prpa boasts a four-time all-conference selection, a two-time CoSIDA Academic All-American selection and a three-time BIG EAST Offensive Player of the Week. Prpa also finished eighth in program history with 28 assists.

Forward Josh Coan is the last remaining MLS SuperDraft prospect from Marquette. Coan could potentially be drafted in the third or fourth round Monday via conference call. If Coan gets drafted, the Golden Eagles will have had three players drafted in the same season for the first time in program history.