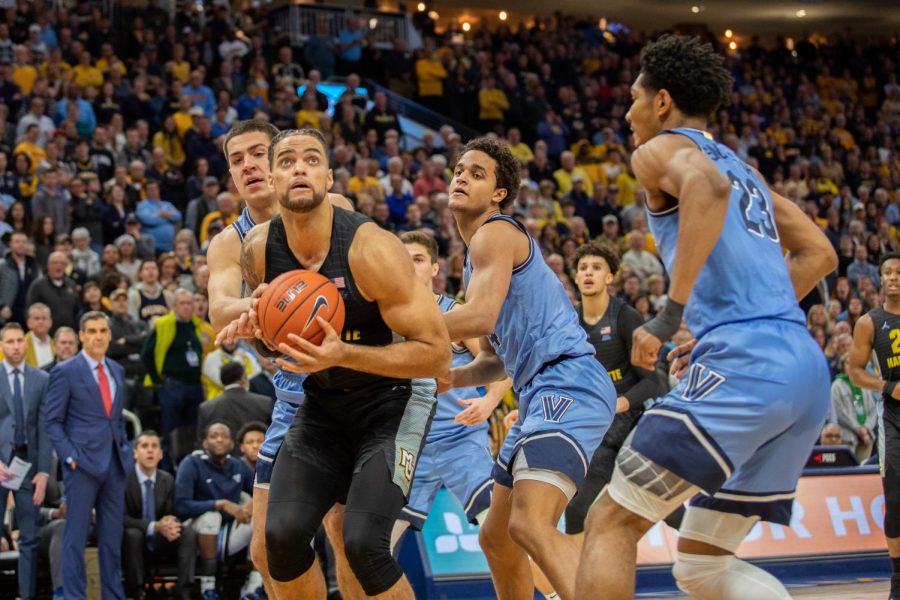 “We beat a hell of a team and a hell of a program,” Marquette head coach Steve Wojciechowski said. “Villanova has been the standard bear in the BIG EAST… Our guys played an outstanding defensive game against one of the top offenses in the United States. We were competitive, we executed the game plan and did a really nice job against a terrific team and a great program.”

The Golden Eagles are now 8-0 at Fiserv Forum and despite it being winter break, the 17,856 fans Saturday produced a hostile environment for the Wildcats, who had won nine of their last 10 games.

“This was a great basketball atmosphere,” Villanova head coach Jay Wright said. “I truly wish we could have given them a better game. They just physically took us out of anything we wanted to do offensively.”

It was Marquette who came out with all the energy, jumping out to an early 9-3 lead. From then on, the Golden Eagles dominated on the shooting front and forced several turnovers.

Eight minutes into the game, Marquette led 22-16 and was shooting 8-for-14 from the field, converting four Wildcat turnovers into five points. Senior Markus Howard had 12 points on 4-for-6 shooting, three rebounds and one assist. By the end of the first half, the 5-foot-11 guard recorded 17 points on 5-for-8 shooting and dished six rebounds.

“Markus gives us some swagger,” Wojciechowski said. “Some of our offensive struggles had to do with Markus as an assistant coach instead of being a player. There’s no question our team feeds off his swagger.”

The Golden Eagles’ biggest lead of the game was when they were up 41-21 at the 4:13 mark on a 16-3 run, holding the Wildcats to one of their last seven shots. Wright called his team’s offense “inept” in the first half.

“We had to be the tougher team today,” redshirt junior Koby McEwen said. “Being able to dive for loose balls, grab rebounds with two hands, staying in front of guys (are) all toughness plays.”

“Taking pride in defense. That’s got to be our identity,” junior forward Theo John said. “Defense travels, defense is always going to be there. Just making sure that we step up and take pride in that part of the game.”

Following halftime, it seemed like Villanova was going to close the gap, trailing by just eight points.At the 10:16 mark, Marquette was one of its last 13 shots and at one point, the Golden Eagles were shooting just 11%.

“We were getting stops, but our offensive decisions were really poor,” Wright said. “We got caught up in being down and not making the right play.”

It was Howard who ended the scoring drought with a 3-pointer. Though Howard fouled out with 37 seconds left, the nation’s leading scorer finished with a game-high 29 points and two steals, along with tying his season-best eight rebounds.

Free throw shooting made the difference down the stretch as Marquette went 13-for-17 from the charity stripe in the second half.

“For (Koby) and Markus to knock down free throws and maintain a three or four-possession lead was very good,” Wojciechowski said.

Besides Howard, McEwen also added double-digits with 22 points on 5-for-12 shooting.

John finished with a season-high 10 rebounds as well as recording four of the Golden Eagles’ seven blocks.

“Anytime there was a breakdown or they had a chance to score at the rim, Theo made it very difficult,” Wojciechowski said. “When Theo is at his best, he is elite at the rim.”

“One of the things about our conference is every game counts as one,” Wojciechowski said. “We have an undefeated Providence team coming in here in 48 hours. … Hopefully (our fans) are not too tired to come back Tuesday night and help us try to get another one because every team in our league is good.”

“We can celebrate for the next few hours and then we have another big game,” John said. “(Providence is) top of the league. To get that win, that’s another big game for us, so we have to lock in.”