BASELINE: Marquette hangs on to beat No. 10 Villanova 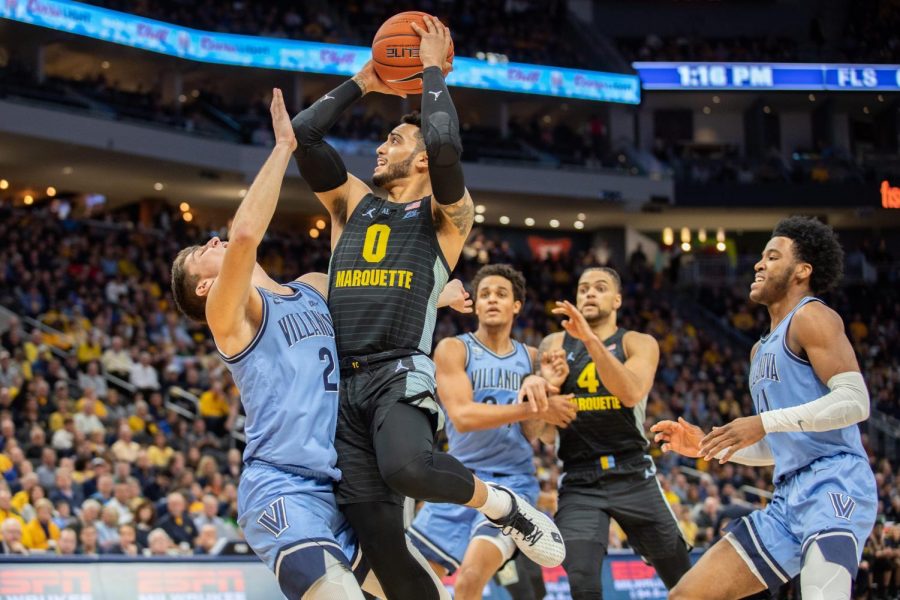 Days after being dominated by Creighton on the road, Marquette welcomed No. 10 Villanova to Fiserv Forum Saturday afternoon, defeating the Wildcats 71-60.

The Golden Eagles thrived off of a very loud home crowd, and despite shooting poorly in the second half, they never allowed Villanova to take the lead. Here is a breakdown of the victory:

Game MVP
Markus Howard had the type of game the Golden Eagles needed to beat a team like Villanova, scoring 29 points on 7-for-20 shooting from the field. He also added eight rebounds and one assist.

Howard’s contested 3-pointer from the corner with just under eight minutes in the second half helped get Marquette out of the offensive rut it was in. He was a big reason why Villanova never got the lead despite Marquette’s poor shooting.

Before that, Howard scored 17 points in the first ten minutes of the game, providing a prolific start for the Golden Eagles to build off of.

“We played team defense,” McEwen said. “Our scout team did an unbelievable job preparing us and we executed the game plan defensively.”

Marquette’s win gave Villanova its first loss to an unranked team this season. The Wildcats’ previous two losses were to a ranked Ohio State and a ranked Baylor.
Marquette scored just five points in the first 12 minutes of the second half, yet its lead never went below eight points in the half.
Marquette had seven blocked shots on the game, including four from Theo John. After the game, Villanova head coach Jay Wright said that even more shots were altered due to MU’s presence down low protecting the rim.
Villanova went to the free throw line just five times, making three of those. The Golden Eagles hit 26 of their 30 free throw attempts.
No Golden Eagles other than Howard or McEwen made a 3-pointer. They went 5-for-21 as a team from beyond the arc.

Injury update
Theo John has been playing through a hand injury since the exhibition game at the start of the season, but chose to play through it rather than redshirt and get surgery.

“Mentally it was messing with me for a while,” John said. “It’s gonna hurt no matter what, but I’m doing what I can to dilute the pain as much as possible, I can’t be thinking about that.”

Quote of the day
McEwen wore a black wrap on his hand following his right thumb injury.

“I just wear this for show. It’s for the style. It matches the black jersey,” McEwen said. “Everything’s good.”

Next up
Marquette will stay home to host the Providence Friars Jan. 7. It will be Marquette’s third conference opponent of the season and will be broadcasted on FS1 starting at 6 p.m.