Creighton hands Marquette its first losing streak of the season 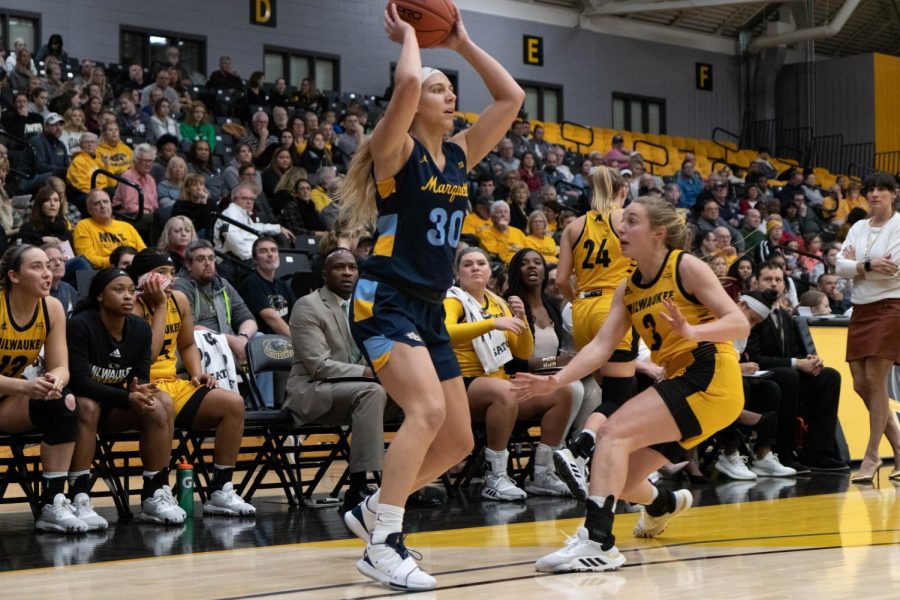 Isabelle Spingola (30) looks for a pass in Marquette's 78-56 win over University of Wisconsin-Milwaukee Dec. 8.

Marquette women’s basketball fell to the Creighton Bluejays 72-62 Friday night after faltering late in the fourth quarter, causing MU to fall to 0-2 in BIG EAST play.

The Golden Eagles are now one loss shy of matching their loss total in conference play from all of last season.

Marquette ended the first half on a 7-o scoring run, giving them a 28-24 lead.

The Golden Eagles benefited from poor Bluejay shooting in the first half. Creighton was 0-for-8 from deep heading into the third quarter.

MU’s defense faltered in the third quarter, allowing Creighton to open up the second half 4-for-6 from beyond the arc. The Bluejays headed into the fourth quarter leading 51-43 and didn’t allow the Golden Eagles to regain the lead the rest of the way.

The Bluejays finished the game on a 9-0 run in the last 32 seconds.

Marquette finished 5-for-14 from three and 42% from the field.

The Bluejays’ senior forward Jaylyn Agnew tallied a team-high 27 points on 9-for-19 shooting. Junior guard Temi Carda was the only other Creighton player to finish with double-digit point totals.

Turnovers continue to plague Marquette. The Golden Eagles finished the game with 13 in total, which marks the 11th-straight double-digit turnover game for MU.

This is this first time all season the Golden Eagles have lost back-to-back games.

Marquette (9-4) looks to earn its first win in BIG EAST play this season against Providence (9-6) in Rhode Island Sunday at noon.