Marquette hosts biggest challenge of season in No. 10 Villanova 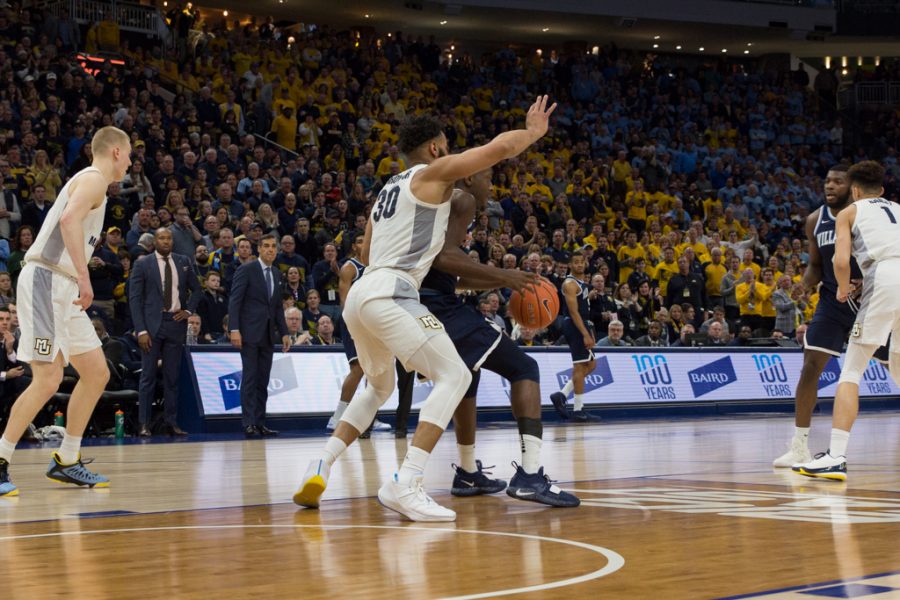 After losing in blowout fashion to Creighton on the road on New Year’s Day, Marquette will host the No. 10 Villanova Wildcats Saturday afternoon.

Creighton’s offense caused Marquette a lot of problems, particularly in the backcourt. Villanova doesn’t boast the type of offensive firepower the Bluejays do, but this game does not project to be any easier for Marquette on either end of the court.

Last season, these two teams split the season series 1-1, with each team winning at home. Marquette won a 66-65 thriller at Fiserv Forum in front of a sellout crowd on National Marquette Day, but then lost 67-61 at Villanova, starting their four-game losing streak to end the regular season. MU was one win away from meeting Villanova in last year’s BIG EAST Tournament Championship game.

This year, the matchup at Fiserv Forum will be over winter break for Marquette students, which could provide a lesser atmosphere compared to last season, but a packed arena is still to be expected and will be a factor in Marquette pulling the upset.

Villanova head coach Jay Wright has another high-level team coming in to this conference season, as they are 10-2 on the year and they have had four days off to prepare for the trip to Milwaukee.

The Wildcats have had multiple high-level matchups already this season, and they are coming off a much better start to their conference season than Marquette after beating Xavier at home by six.

In nonconference play, they picked up a very important win against the Kansas Jayhawks. The Wildcats’ two losses included a blowout loss to Ohio State and a loss to Baylor. They are looking to extend their six-game winning streak to seven against MU.

Starting 0-2 in a conference that is arguably one of the most competitive in the country this season is certainly not what Marquette wanted. It won’t get any easier for the Golden Eagles with Seton Hall looming a week ahead of the Villanova game.

Marquette’s big wins this season include Purdue at home, USC on a neutral floor and Kansas State on the road. The Golden Eagles lost to the one ranked team it played this year in then-No. 5 Maryland. Villanova would be MU’s best win by a good margin. Tipoff will be at 1:00 p.m. CT on Saturday at Fiserv Forum and will be broadcasted on FOX.

Villanova head coach Jay Wright was named Associated Press Coach of the Decade.
The Wildcats have won two NCAA Championships in the last four years and have made the tournament seven consecutive years.
Villanova is 1-2 against ranked teams this season, with No. 5 Ohio State and No. 6 Baylor being their lone losses.
The Wildcats lost Phil Booth and Eric Paschall from last year’s team, who scored a combined 36 points against Marquette at Fiserv Forum.
The Wildcats beat the then-No. 1 ranked Kansas Jayhawks at home, becoming the sixth team to beat a No. 1 overall ranked team this season.

The series dates back to 1960.
Villanova is 24-11 in the all time matchup against Marquette.
Since 2007, Marquette is 5-5 at home against Villanova, while they are 2-10 on the road and 2-6 when they’ve met in the conference tournament.
Marquette has not won a game at Villanova since the 2012 season.
Besides the regular season, the teams have met in the 1963 National Invitation Tournament and 1980 NCAA Championship.

Villanova’s Collin Gillespie is leading the charge for Villanova so far this season. The 6-foot-3 junior guard leads the Wildcats with 15 points, 4.5 assists, and 1.5 steals a game. He’s shooting above 40% from the field.
Saddiq Bey is not far behind Gillespie in points per game with 14.7, but the 6-foot-8 forward brings a different type of game. He averages almost a block per game, but is shooting 41% from the three point line.
Jeremiah Robinson-Earl is another big presence down low for the Wildcats. The 6-foot-9 forward is averaging close to a double-double with 11.3 points and 9.2 rebounds a game. He’s also leading the team in blocks per game with 0.9.
Markus Howard is going to have to have a big game if Marquette is going to pull the upset, and with that efficiency is key. The nation’s leading scorer has had big performances this season, but he can also hurt the team when he is not knocking down his shots.
Brendan Bailey has begun to establish a key role for this MU team after some early season struggles. He had 18 points in the loss against Creighton, and has at least eight points in three straight games while having double digit rebounds in two straight and contributing assists as well.

Keys to the game

Marquette: Win the turnover battle, or at least keep it close. Villanova is a well coached, fundamentally sound team, and in terms of turnovers, Marquette has not been. If they can limit turnovers then they can run the offense they want to run while controlling the Wildcats’ scoring as well. Also, Howard needs to have a Markus Howard-like day, as he did in their matchup at Fiserv Forum last season, scoring 38 points.
Villanova: Force a lot of turnovers and push the ball to score off of those. Marquette has struggled with turning the ball over spanning from the end of last season into this year, and Creighton forced 16 turnovers leading to 17 points. If the Wildcats can do that to quiet the crowd that will lead to success.