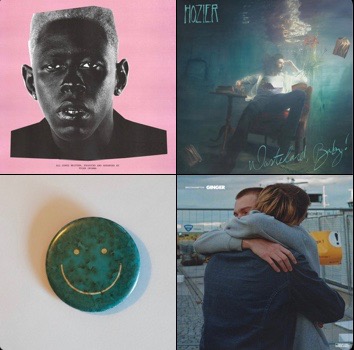 Here are the top 10 albums of 2019 for Marquette Radio music director Reese Seberg.

2019 was a year of change for music. Several artists broke out of their comfort zones and tried out genres that were new to them. This year broke boundaries for rap, alternative rock, pop and emo rap in different ways. With so many albums to choose from, it was hard to narrow it down to just 10 records. Here are the best albums — and the most crucial to listen to — of 2019.

The lo-fi artist HOMESHAKE came out with “Helium” in February 2019. HOMESHAKE, whose real name is Peter Sagar, was a former guitarist for Canadian singer-songwriter Mac Demarco. His music manages to reflect Mac’s style without directly following in his footsteps. His home-recorded aesthetic takes a slightly more techno, processed turn with “Helium,” but the album still also has Sagar’s typical jazz style, which makes it iconic. “All Night Long” and “(Secret Track)” are by far some of the better songs off the album. “Helium” is smooth, light and perfect for fans of retro-style music. I found myself listening to this album whenever I was doing homework, driving or just hanging out. Sagar is a musical genius and creates his own version of music, which makes him an incredibly unique artist.

Best Tracks: “All Night Long,” “Other Than” and “(Secret Track)”

Cage the Elephant’s “Social Cues” was the alternative rock album of 2019. This album took the group’s music even further and included a few melancholy tracks like “Love’s The Only Way” and “Goodbye.” Specifically, “Ready To Let Go” pulled on the heartstrings, as it seems to be about lead singer Matt Schultz’ wife and him realizing they needed a divorce. Schultz is a lyrical genius and at times sounds somewhat similar to Jesse Rutherford, the lead singer of The Neighbourhood, which was eerie but enticing at the same time. “Social Cues” might just be the group’s best album to date, and it totally rocked 2019.

Best Tracks: “Skin and Bones,” “The War Is Over” and “Dance Dance”

Per usual, BROCKHAMPTON’s latest work “GINGER” took the world by storm. The group took a break after the departure of one of its bandmates, Ameer Vann, and this album was crafted in the midst of it all. This album was more boring than the group’s usual frenzied style. However, the calmer style worked quite well with this album due to the themes of its songs. “GINGER” deals more with grief, love, hatred and self-hatred than any of the group’s other albums. At times, the boys seem to be having an identity crisis without Vann. Despite his absence, however, this album was darker than anything the band has done and it resonated with its fanbase quite well. If you prefer older BROCKHAMPTON like me, you can still get its manic rapping and crazed vibe from “ST.PERCY,” “SUGAR” and “IF YOU PRAY RIGHT.”

“ANONYMOUS” showcases blackbear’s ability to not only sing, but to keep it real with his fanbase. He has been open about his alcoholism and substance abuse in the past, and the trend continues in this album. All 18 songs are unique and cover different struggles. Not only are they all incredibly catchy, but they are also lyrically more challenging than his previous work. “SICK OF IT ALL” and “DEAD BALLOONS” address his issues with fame and sobriety, respectively. He closes his album with the solemn track “NYLA,” along with some more upbeat songs. This album was different than some of his other work, and it shows blackbear’s authenticity. He really knocked it out of the park with this album, and I didn’t expect to love it as much as I did.

Best Tracks: “HATE MY GUTS,” “SICK OF IT ALL” and “DEAD BALLOONS”

To not mention this album at least once would be doing it an injustice. I am not an Arianator, as her fans call themselves; however, this album completely rocked my last semester of high school. “thank u, next” was written fairly quickly after Grande’s preceding album “sweetener,” and it is her best album to date. The entire album has not one bad song, and each one is different. From her empowering songs such as “NASA” and “in my head” to her more emotional ballads like “ghostin” and “imagine,” there is truly something for everyone. This was the first album that wasn’t romantically driven or written while she was in a relationship, making it more of an anthem for the single individual. Ariana addresses several real issues, such as the death of her lover Mac Miller, her mental illness and being a flawed celebrity. Old Ari was still present in this album, which incorporated several feminist anthems per usual. Any song on this album is guaranteed to be stuck in your head for at least a week.

After Lil Peep’s passing in November 2017, his mom and his team continued to produce his prerecorded music and previous SoundCloud hits. “EVERYBODY’S EVERYTHING” completely surprised his fanbase, as it came out in November 2019, two years after his death. This album combined some of his earlier music with his last recorded songs, which have their own album “GOTH ANGEL SINNER.” This album really dove into his sadness and his troubled personality. While his other songs typically reference heavy drug use and designer brands, this record showed a more personal and emotional side of Lil Peep. This album did the late Peep justice and honored him beautifully.

Best Tracks: “AQUAFINA,” “Belgium” and “When I Lie”

“Here Comes The Cowboy” is definitely more abstract than Mac DeMarco’s other work, but was still reminiscent of his earlier songs, which made it a huge success. This album incorporates DeMarco’s typical psychedelic indie vibe with more funk-style songs, while intertwining his goofy character. Funk and heavily-edited music is new territory for DeMarco; however, it works and really made this album. Not to mention, DeMarco’s music videos for the albums are unlike any of his others. He utilizes animation and creepy characters — which is not at all surprising  — and they go perfectly with this album. “Preoccupied” and “Nobody” were especially nostalgic for long-time fans as they sounded similar to his previous work in “This Old Dog.” All in all, there’s nothing not to love about this album.

Best Tracks: “Nobody,” “Preoccupied” and “All Of Our Yesterdays”

Martinez’s music is super unique to the pop genre as it has a slightly vintage feel to it, which she really demonstrates in her latest album “K-12.” It had been long awaited by fans, as her last album, “Cry Baby,” came out in 2015. While “Cry Baby” was big, “K-12” was bigger. Melanie released a film titled “K-12” on YouTube, and it includes all 13 songs from the album as well as Cry Baby’s life progressing throughout school after her infant years. This album was lyrically more genius and deliberate than “Cry Baby,” in my opinion. Martinez’s songs cover commonly taboo subjects such as eating disorders, smoking marijuana, challenging the patriarchy and sexual harassment in school. Martinez’s “baby” persona wasn’t as present in this album as it was in her last, but I believe it was because the persona of Cry Baby is getting older, hence the more lyrically challenging music and the darker references.

“IGOR” absolutely crushed the spring and summer of 2019. It combined elements from Tyler’s two previous albums “Wolf” and “Flower Boy.” Tyler went very avant-garde with this album, but rather than changing his style completely, he integrated new ideas with his old rapping and songwriting habits. He took it to the next level musically and it broke boundaries in the rap genre. With every album, Tyler sings more and more, and his voice never really follows a traditional pop or rap genre, which I love. This album was emotionally driven but still had darker themes and his usual “spooky” elements in his rapping, specifically in “NEW MAGIC WAND.” From start to finish, this album was an experience and definitely the best album of 2019.