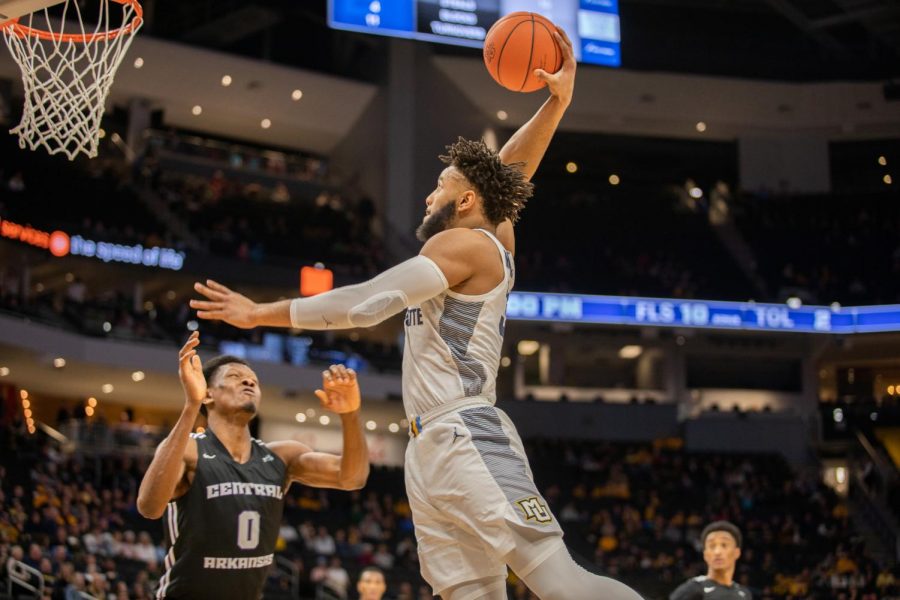 Redshirt senior Ed Morrow attempts a dunk in the second half of Marquette's 52-point win over Central Arkansas Dec. 28 at Fiserv Forum.

Marquette’s last game before BIG EAST play wasn’t exactly the closest, winning 106-54 against the University of Central Arkansas Saturday at Fiserv Forum. It was enough for first-year guard Symir Torrence to test out a new 3-point celebration.

“Some of the NBA teams do it, and we decided to do it after every 3-pointer,” Torrence said.

Fancy dance footwork aside, here’s a quick breakdown of the victory:

Game MVP: Markus Howard had another Markus Howard-like performance, scoring 30 points on 9-for-13 shooting from the field, which included five 3-pointers.

He had more points in the first half — 25 — than the entire Bears roster.

Howard became the all-time program leader in 3-pointers made with his first three of the day, passing Steve Novak. He also jumped to third in program history for free throws made, passing Jimmy Butler.

Outside of Howard, sophomore forward Brendan Bailey flirted with a double-double, putting up nine points and a team-high 12 rebounds. He also had four assists.

Wojciechowski said Bailey would’ve had the double-double if he didn’t “bang up his knee.”

“He really stuffed the stat sheet,” Wojciechowski said. “Those are very impressive.”

It was the highest-scoring output for Bailey since his 27-point performance Dec. 1 against No. 5 Maryland.

Saturday’s win marks Marquette’s last nonconference game before starting BIG EAST play Wednesday. MU will enter the conference slate with a 10-2 record, the team’s best mark in the Wojciechowski era.
One of Markus Howard’s brothers, Jordan Howard, graduated from Central Arkansas last year. They comprise the highest-scoring brother duo in NCAA history with 4,768 combined career points.
The Golden Eagles went to the free throw line 36 times Saturday, converting on 64% of them. Three of Central Arkansas’ players fouled out.
Four MU players had at least five assists. “That’s working a lot for us,” Torrence said. “The more we share it, the more happy we feel, the more fun we have on the court and the more wins we’re going to get.”

Injury update: Koby McEwen was not in uniform after suffering a right thumb sprain in practice. The team announced he is day-to-day. Wojciechowski said the team is doing more tests and does not have any more information.

“We’ll have a better idea of what we’re dealing with as the weekend finishes,” Wojciechowski said. “Obviously we’re better with Koby. I’m proud of how well our guys played, but we need Koby.”

“That’s a mark of a really good point guard, which (Torrence) is and will continue to grow to be,” Wojciechowski said.

Next Up: The Golden Eagles open BIG EAST play Wednesday at Creighton. It’s MU’s first trip to Omaha since overcoming a five-point deficit with two seconds left in regulation. Creighton head coach Greg McDermott said after the game he “really let the kids down.”