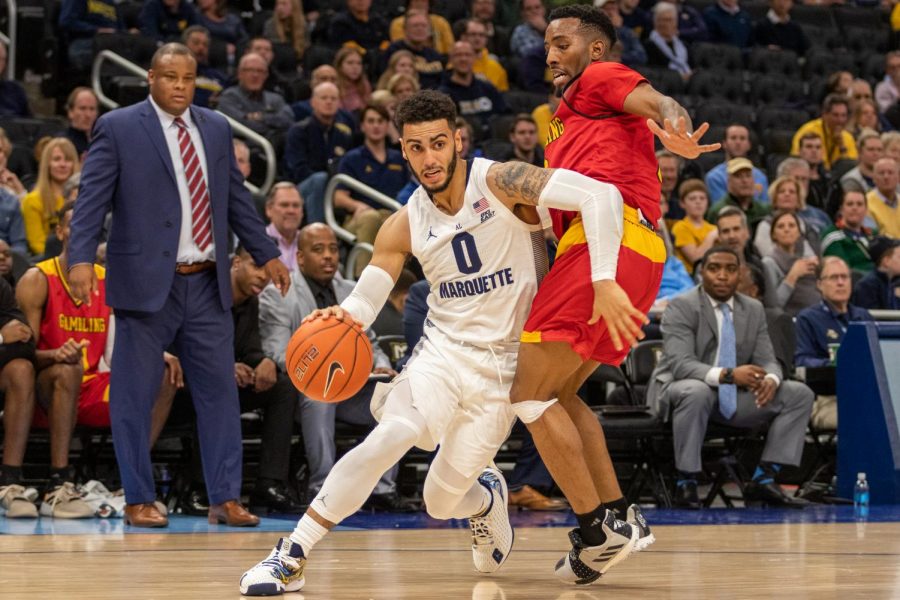 For Steve Wojciechowski, the first game after final exams is a chance to knock the rust off.

“You try to make practices harder than games, and you try to have practice simulate game situations,” the six-year head coach said. “But there’s nothing like playing in games.”

Tuesday night, the Golden Eagles did exactly that, winning 93-72 against the Grambling State Tigers in their first game since Dec. 7.

It wasn’t exactly the prettiest start. Marquette did not lead by more than five points until the 4:23 mark in the first half and committed seven turnovers in the first 14 minutes.

“We had such a long layoff, and I think that showed early in the game,” Wojciechowski said.

But the offense found its rhythm, leading by 15 at halftime and by 29 at one point in the second half.

The team had a season-high 27 assists on 29 field goals.

“We were very unselfish. I thought we made the extra pass,” Wojciechowski said. Guys passed up good shots for great shots… We have guys that look to pass first, and it becomes contagious.”

Senior guard and reigning BIG EAST Player of the Year Markus Howard had a strong showing in his second game back since going into concussion protocol earlier in December. He scored 26 points on 6-for-13 shooting. All six field goals came from behind the 3-point line, which included three 3-pointers in the first two minutes of the second half.

“Am I surprised? No,” Wojciechowski said. “I think I’ve learned not to be surprised when it comes to Sacar’s improvement. There’s not a guy on our team or our program or anybody that I’ve coached at Marquette that’s worked harder than Sacar.”

After scoring a career-high 17 points against Kansas State, junior forward Jamal Cain had another productive night. He finished with 11 points on 4-for-5 shooting.

“Jamal is in a great rhythm with his role,” Wojciechowski said. “What you want guys to do is star in their role, and I think Jamal has really embraced that.”

First-year guard Symir Torrence saw a career-high 18 minutes Tuesday. He shot 1-for-3 but had four assists and one steal.

“He’s dependable, and he’s smart offensively,” Wojciechowski said. “He goes to bat and tries to hit singles, and he gets a lot of them, and as a result, he makes other guys better.”

Redshirt junior Koby McEwen had 10 points, five rebounds and seven assists. He shot 2-for-7 for the field, marking his seventh consecutive game with three or fewer field goals.

“His shooting will come,” Wojciechowski said. “I have no doubt that when he’s open, those are shots that are going to go in. They’re just not going in right now.”

As usual, the Golden Eagles relied heavily on the perimeter, scoring half of their first-half scoring from deep.

That success did not translate to inside the post. Grambling State had a 28-22 scoring advantage in the paint and a 35-33 rebounding advantage.

Marquette (8-2) has a few days off before playing host to North Dakota State Friday night at Fiserv Forum.

“We have to put together 40 minutes of really good defense and really good offense,” Wojciechowski said. “I’m not sure we’ve done that yet for 40 minutes here at Fiserv.”