Marquette prepares for challenge against No. 16-seeded Purdue in West Lafayette 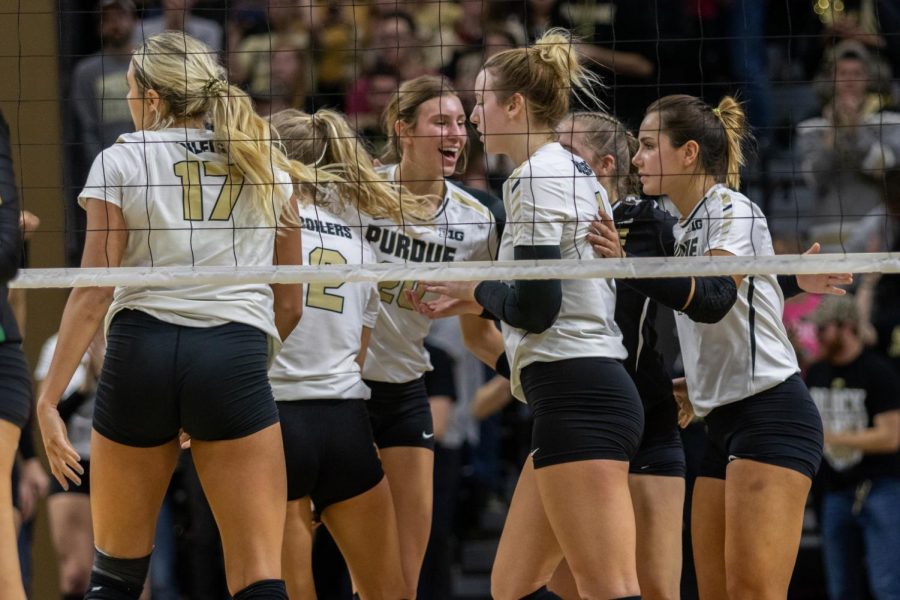 The Boilermakers have not lost at Holloway Gymnasium since Nov. 3.

The Golden Eagles will remain in Indiana after sweeping a talented Dayton Flyers team Friday night but will face a harder opponent Saturday at the Holloway Gymnasium: the No. 16 Purdue Boilermakers.

“Marquette is a team that really believes in themselves. They’ve got a coach that’s been very successful, a very confident coach,” Shondell said. “I know he’ll have them believing that they’re going to win this match tomorrow.”

Shondell said one of his team’s biggest concerns while preparing for Marquette is containing senior outside hitter Allie Barber.

“(Marquette) has one of the best outside hitters in the country,” Shondell said. “I think (she should be) a First Team All-American.  … She’s really physical, and she is going to really stress our block and our defense out there.”

Even though Purdue has the advantage of playing at home as the higher-seeded team, Shondell hopes to prove any doubters wrong Saturday night.

“There’s a lot of people out there on the different message boards that are certainly picking Marquette to beat Purdue,” Shondell said. “Marquette has been ranked ahead of Purdue all season. Hopefully we’ll represent the Big Ten and Purdue and play as well as we can.”

The Boilermakers play in the Big Ten Conference, which many consider to be the most prolific volleyball conference in America. The league consists of No. 5 Wisconsin, No. 6 Nebraska, No. 7 Minnesota, No. 8 Penn State and No. 22 Michigan, as well as a handful of teams that received votes in the AVCA poll throughout the year.
At the beginning of the year, Purdue was ranked No. 17 in the AVCA poll, one spot below then-No. 16 Marquette. Purdue has been ranked throughout the entire year, falling as low as No. 23 and rising as high as its current spot of No. 14.
Purdue has never lost in the Round of 64 under Shondell but has not advanced past the second round since 2013. Shondell’s squads have missed the NCAA Tournament just three times in his career (2003, 2009, 2014) but have never advanced past the Elite Eight.
The Boilermakers graduated right side hitter Sherridan Atkinson. Atkinson was a Third Team All-American and All-Big Ten selection in 2017 and a First Team All-American and unanimous all-conference player in 2018. She averaged 4.2 kills per set, boasted a .296 hitting percentage and totaled 197 digs, 75 blocks and 34 aces in her senior campaign.

Purdue has only lost one nonconference game, which came Sept. 6 at Notre Dame.
The Boilermakers have defeated five teams ranked at the time of the match, including No. 22 Louisville, No. 16 Kentucky, No. 5 Nebraska and Michigan twice, once when the Wolverines were No. 23 and another when Michigan was No. 22.
Purdue has not lost since Nov. 9 at No. 8 Penn State and has won eight of its last nine matchups.
The Boilermakers have only lost one matchup against an unranked squad, which was at Notre Dame in the first tournament of the year. The other losses came against No. 13 Wisconsin, No. 7 Minnesota, No. 18 Illinois, No. 5 Nebraska, No. 6 Minnesota and No. 8 Penn State.

Outside hitters Grace Cleveland and Caitlyn Newton were both All-Big Ten First Team selections this year. Cleveland, the No. 13 recruit in her class, has totaled 118 blocks and has hit .272 on her way to 3.28 kills per set. Newton, a 6-foot-1 junior, is averaging 3.76 kills and 1.51 digs per set and has added 62 blocks.
Middle blocker Blake Mohler is a major force at the net for the Boilermakers. The redshirt senior is a two-time All-Big Ten First Team selection and has 124 blocks on the season in addition to averaging 2.21 kills per set and hitting .341 on the year.
Setter Hayley Bush is averaging 10.72 assists per set on the year, spreading the ball to multiple different hitters. The 5-foot-10 redshirt sophomore also has 41 blocks and averages 2.14 digs per set.
Two defensive specialists, sophomore Marissa Hornung and junior Jena Otec, see a lot of time for the Boilermakers. Hornung started as libero against Wright State and is averaging 3.79 digs per set this season. Otec has contributed 3.61 digs per set this year, adding 50 assists and 43 service aces.

This story was written by Dan Avington. He can be reached at daniel.avington@marquette.edu or on Twitter @danavington.