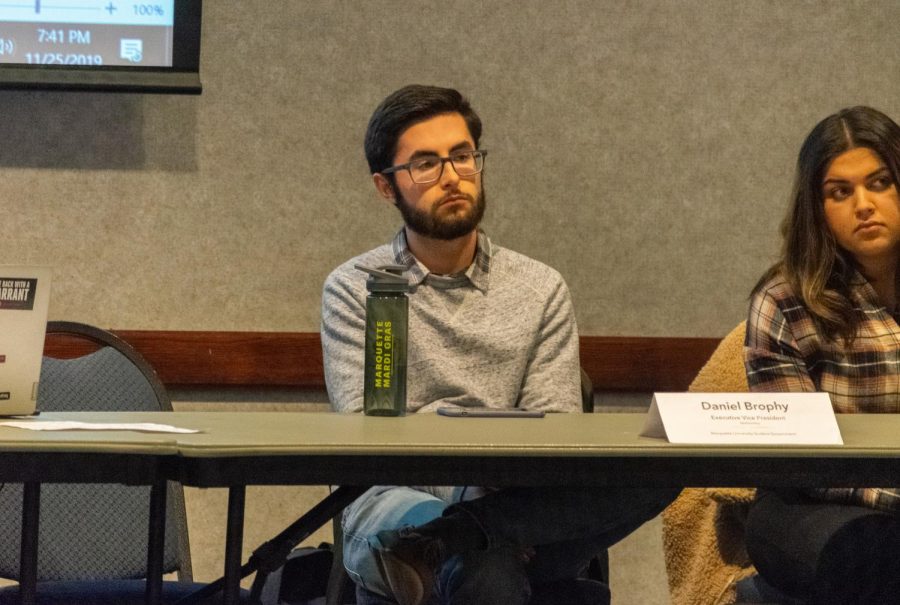 Senators from Marquette University Student Government unanimously passed an exemption Nov. 25 to allow Executive Vice President Dan Brophy to remain in his position as a part-time student despite a constitutional provision that advised against this.

Brophy, a senior in the College of Arts & Sciences, will be part time during the spring 2020 semester, meaning he will take fewer than 12 credits. He said the decision was made in an effort to save money and graduate with less student loan debt. Brophy said his part-time status will not negatively affect his MUSG position because he will have less academic work and more time to focus on MUSG responsibilities.

“It affords me the opportunity to focus a lot more on my MUSG work than focusing less on it, and that is something I am actually really excited about,” Brophy said.

According to Article II, Section I of the MUSG Constitution, all members of MUSG must be full-time undergraduate students.

Brophy asked the Senate to vote in favor of an exemption for him, which would allow him to bypass the constitutional provision and stay in his position as a part-time student.

“EVP Brophy is seeking an exemption only for the remainder of his term as EVP; and, Whereas: EVP Brophy reaffirms his commitment to serving a full term and fulfilling the responsibilities of his role as well as the additional work that he is currently engaged in,” part of the exemption read.

The Senate voted on the exemption at its legislative meeting. Brophy will remain in his position as executive vice president of MUSG through the rest of his term, which ends April 1, 2020.

“It felt good because I get to stay in the organization and fulfill my responsibilities that I committed to,” Brophy said. “But at the end of the day, I am glad (the vote) happened, but there is a lot more that we could be doing and should be doing.”

This change would allow MUSG Senate to provide an exemption or suspend certain parts of the constitution if needed, Brophy said. The process for doing this is strict and is outlined in detail in the legislation, Brophy said.

The new amendment states that suspensions need to be approved by MUSG’s Judicial Administrator and a majority vote by the Judicial Committee. After this, suspension and exemption proposals are discussed and voted on by the Senate, requiring a two-thirds approval from members. If the suspension or exemption proposal passes, it is considered MUSG legislation and is presented to the university’s vice president of student affairs or another designated official.

The president can veto the Senate’s decision, but the Senate can overrule a presidential veto by a three-fourths majority vote, according to the MUSG Constitution.

Brophy’s approved exemption came with a condition that he will still have to pay a $30 student activity fee that is normally omitted for part-time students.

Cory Forbes, a first-year student in the College of Arts & Sciences, is on the Student Organization Funding Committee in MUSG and works closely with Brophy.

Forbes said he voted in favor of the exemption because he said swapping Brophy out with someone else next semester would cause chaos. Brophy’s position, executive vice president, is chair of the SOF Committee and is tasked with overseeing the process of student organization funding.

As a member of the committee, Forbes said it took him two or three weeks to get comfortable with his tasks, and a replacement for executive vice president would have to do more work than him and learn how to do the position in a short time frame.

Aside from Brophy, MUSG Communication Vice President Nick Cordonnier will be a part-time student next semester. He is a senior in the College of Communication.

Cordonnier went through a similar process as Brophy, writing an exemption that the Senate voted on. His exemption passed and he will remain in his position for the rest of the term, until April 1, 2020.

He said he wanted to stay in MUSG because he already started planning for next semester.

“I am really excited for it — it kind of showed me my fellow MUSG peers are happy with the work I am doing, like a bit of a pick-me-up that way,” Cordonnier said.

Editor’s note: Nick Cordonnier worked in a paid position for the Marquette Wire in previous semesters.

This story was written by Kate Hyland. She can be reached at katherine.hyland@marquette.edu.