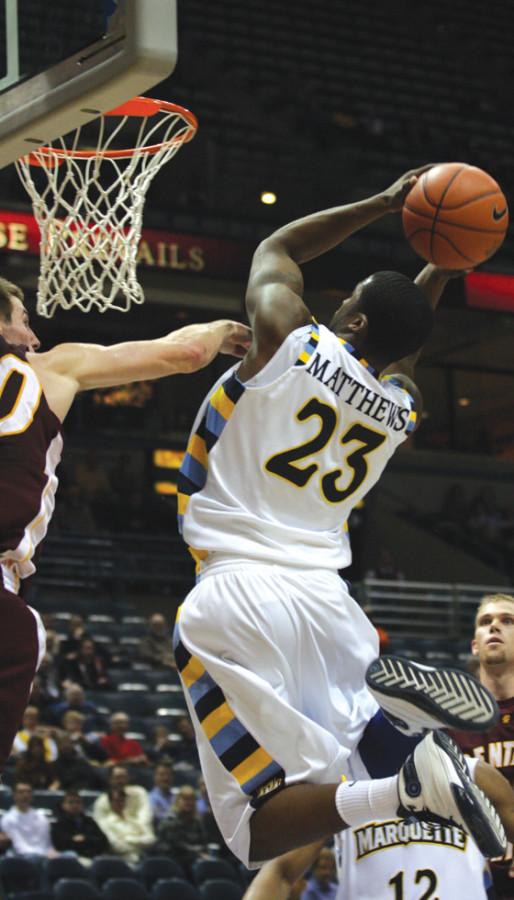 Donning a blue warmup shirt with “Cream City” emblazoned on the back, laughing with teammate Kyle Korver and standing only a handful of 25-foot 3-pointers away from where he played college basketball at the Bradley Center, there’s one thing abundantly clear to Wesley Matthews.

“It is home,” Matthews said after the Bucks’ win Saturday at Fiserv Forum.

The 2009 Marquette alumnus said it’s “a comforting feeling” to hear “Go Marquette” as he walks around Fiserv Forum in his first season with the Bucks. There’s even “a little bit” of deja vu seeing familiar faces around the building.

Yet he is finding a home in Fiserv for reasons other than just the Marquette banners in the arena’s rafters.

In his 10th season in the NBA and on his sixth team, Matthews has found a home for his defense-first mentality and relentless work ethic.

“One of the biggest things that drew me to this team was their defensive prowess and how they attack on the defensive side of the ball,” Matthews said.

Statistically, Matthews has been a part of one of the best defenses in the NBA.

“He’s been really big. We always, I think, lean on our defense,” Bucks head coach Mike Budenholzer said. “I love what he can do at different positions.”

Budenholzer said he’s among Bucks players fighting for the opportunity to guard the best player on opposing teams.

His defense has impressed teammate and reigning NBA Most Valuable Player Giannis Antetokounmpo, who said he’s “always on defensively” and “always there.”

That’s nothing new to Matthews, though. In his junior year at Marquette, Matthews and the Golden Eagles were 21st in the country in adjusted defensive efficiency, per KenPom, a prominent college basketball analytics site.

After serving as one of the primary scoring options for many non-contending NBA teams such as Indiana and Dallas, he has the luxury of not necessarily needing to carry the team offensively, as Antetokounmpo is a couple lockers down from him.

He entered Saturday’s game against the Hornets averaging 6.2 field goal attempts per game, the lowest of his career. His usage rate — 12.3% — is also at a career low. Usage rate measures how many possessions Matthews is involved with.

But when Milwaukee needs some perimeter scoring, he’s increasingly been a reliable option. Matthews has hit at least two 3-pointers and finished with at least 10 points in six of the Bucks’ last seven games.

“Obviously offensively, when he’s rolling, he can knock down shots,” Antetokounmpo said. “He can drive the ball (and) make plays.”

Matthews’ comfort being “home” has shown on the court. After making a couple threes Saturday, he celebrated with by doing a bow-and-arrow motion dating back to fooling around in a practice with the Portland Trail Blazers.

Other times, he’s putting teammate Robin Lopez in a headlock in a World Wrestling Entertainment-style move.

Yet when it comes to basketball, Budenholzer has seen “a focus to him that’s been good for us.”

Antetokounmpo, who has developed a reputation for his fierce work ethic, said he takes advice from Matthews.

Antetokounmpo noticed his “amazing” work ethic immediately when he recruited Matthews to join the Bucks.

When Antetokounmpo called, Matthews didn’t answer because he was working out.

“He called me back and said, ‘I’m in the gym. I’ll text you,’” Antetokounmpo said. “That says a lot. He could be laying on his couch watching TV or doing whatever.”

Before that, Antetokounmpo also heard about Matthews’ work ethic from people around the league.

“He’s not a BS guy,” Antetokounmpo said of rumors about Matthews. “He’s going to tell you how it is. That’s the guy you need on a championship team.”

That focus has kept Matthews from paying too much attention to his alma mater and Fiserv Forum co-tenant.

He made it to Marquette Madness in October and to one home game, but he didn’t get a chance to see Markus Howard’s 40 and 51-point performances last week.

“(Howard’s) a tremendous scorer,” Matthews said. “I’m hoping to catch a game when he does go off like that.”

That is, of course, as long as there isn’t a Bucks opponent to study.

This story was written by John Steppe. He can reached at john.steppe@marquette.edu and on Twitter @JSteppe1.