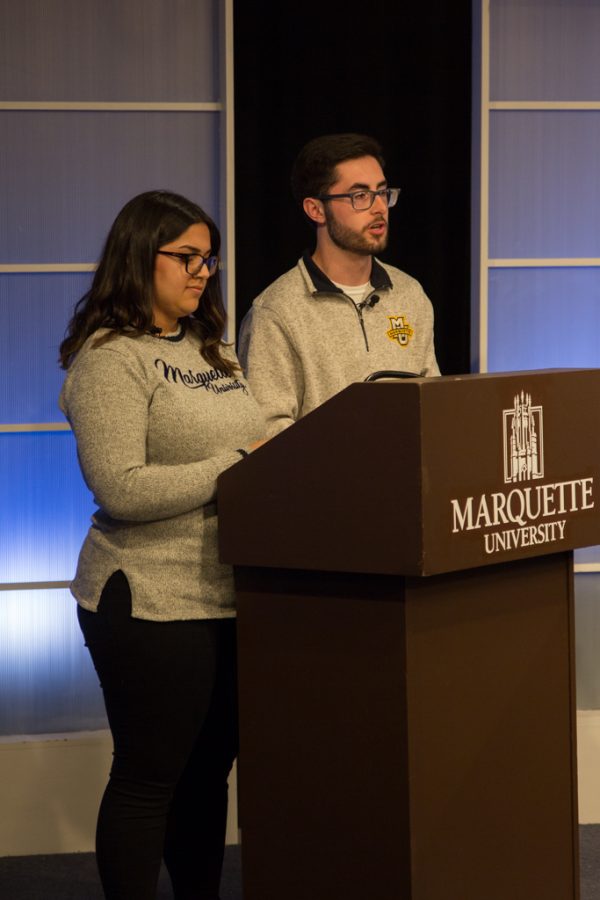 As the semester comes to a close, MUSG President Sara Manjee and Executive Vice President Dan Brophy will finish their first semester in office.

When the pair won the election in March 2019, it beat competing candidates Peter Feider and Faezh Dalieh. They received nearly 68% of the student vote and were elected on the promise that they would “listen to, learn from, and acknowledge the stories of every student at Marquette” and strive to make sure student voices drive the mission and future of Marquette’s campus, according to the MUSG website.

During the 2019 MUSG Presidential Debate, there were a number of goals Manjee and Brophy set out for their term. The elected officials declined several requests for an interview from the Marquette Wire for this story. Some updates may be incomplete.

“(Callisto is) an app that other universities use, and I think it’s just one idea that we should at least bring to administration and force the university to have a conversation about, but I think overall a big part of this is continuous training, continuous conversations and from MUSG’s part, continuous advocacy to let the university know that this is something that all students care about,” Brophy said at the debate.

MUSG has begun collaborating with the Sexual Misconduct and Title IX Office, Legislative Vice President Peter Feider said. The Marquette Wire is unaware of any initiatives to utilize the Callisto app, which provides resources, a personal reporting platform and the ability to enter alleged perpetrators in a system that identifies repeat offenders, according to its website.

“One of the things that we put in our platform is to advocate for a four-year personalized tuition plan for students,” Brophy said at the debate. “Essentially what that would do is allow students to know, over a period of four to five years, ‘I’m going to pay X amount of dollars total,’ even if you’re not entirely sure if it’s going to be down to that number, you can have some range, as opposed to right now.”

Brophy pointed out students come in freshman year not knowing what they will pay their sophomore, junior and senior years.

“The second thing in terms of closing that communication and information gap is looking at financial literacy training, especially for low-income and first-gen students who might not necessarily have had those resources in high school,” he said. “I think that’s something that MUSG can easily advocate for.”

The Marquette Wire is unaware of any progress on creating personalized tuition plans for students.

“One thing is to just be more intentional about the organizations that we are supporting,” Brophy said. “The second thing that we note on our website and in our platform is that we want to fully support the Office of Sustainability at Marquette.”

Brophy said at the time they want to advocate for a budget for Brent Ribble and make sure he had a seat at the decision-making table.

Ribble became the university’s first full-time sustainability coordinator in July 2016. His responsibilities included planning and implementing ways to conserve resources, protect air, water and habitat quality and lessen pollution at the university. He left the position in summer 2019. Since then, it has not been filled. The Marquette Wire is unaware of any efforts by MUSG to achieve a budget for the Office of Sustainability, where Ribble worked. Feider said MUSG plans to work with Students for an Environmentally Active Campus next semester.

“One of the first things that we intend to work on if we’re in office next year is the communication gap between MUSG and the student body,” Brophy said. “I think one of the most important ways we can do that is by having the president and vice president and potentially a legislative vice president actually go out and at least talk to the executive board of student orgs and say, ‘Here’s the different positions that are open, here’s how MUSG works.'”

He said the second thing was to be intentional about which communities are invited into the conversation. He acknowledged that MUSG has historically been a white and male institution.

“That’s something that we recognize,” Brophy said. “Changing that process is difficult, but it’s a process we have to continue to work on.”

It is unclear whether MUSG has made efforts to mend communication issues between its members and student organizations.

“One thing that we want to do is more intentional outreach by president and vice president to actually go to student org meetings and explain those processes to them,” Brophy said at the debate. “You’re not only expected to do student org funding, but you are also expected to take care of the responsibilities that you have with your platform.”

“If we are able to add another person to the mix … then we are going to be able to split up the roles a little bit more and make it a lot easier to meet with students one on one and share that information with them,” he said.

This story was written by Alexa Jurado and Natallie St. Onge. They can be reached at alexa.jurado@marquette.edu and natallie.stonge@marquette.edu.