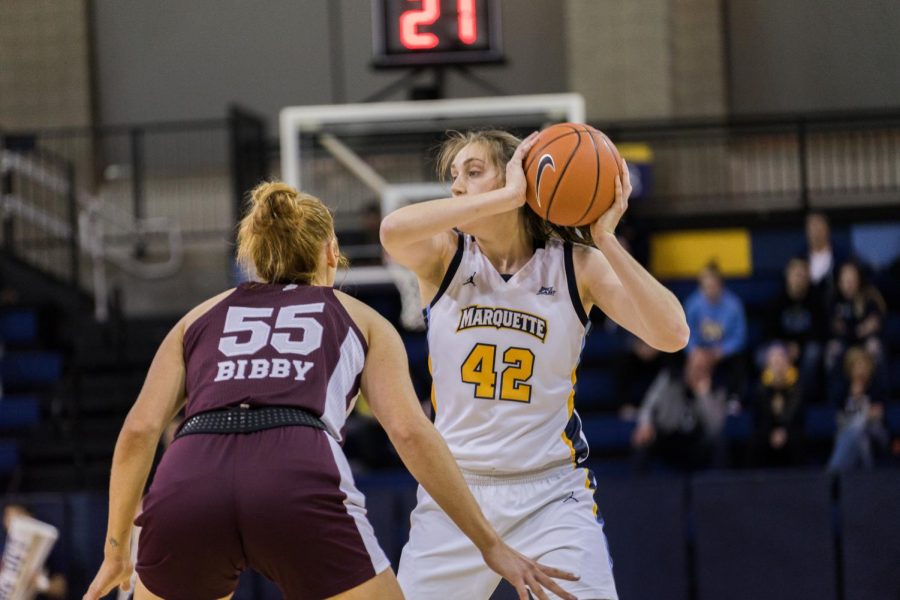 Following their second home loss of the season, Marquette women’s basketball bounced back in a 77-63 win out west against Saint Mary’s Friday afternoon.

Saint Mary’s opened the game with an 8-2 run before Marquette’s offense found its rhythm with a 3-pointer from junior guard Selena Lott. First-year guard Jordan King hit a buzzer-beating 3-pointer to give MU a 25-21 lead at the end of the first quarter.

Marquette went into a shooting slump in the second quarter for the second straight game. The Golden Eagles did not hit a 3-pointer again after hitting four 3-pointers in the first.

The Golden Eagles struggled to hit shots early in the third quarter, taking almost three minutes to get their first field goal. However, they finished the quarter on a 14-6 run to take a 13-point lead heading into the fourth quarter.

Saint Mary’s brought the game within 10 with seven minutes left in the fourth quarter, but six free-throws allowed the Golden Eagles to cruise to a 14-point lead.

Lott and Van Kleunen led the Golden Eagles with 18 points each. Senior guard Izzy Spingola had a team-high 10 rebounds.

The Golden Eagles did not trail the game for the last 32:27 after Saint Mary’s opened up with an early lead.

For the sixth time this season, Megan Duffy’s team held its opponent to less than 40% shooting.

Marquette (5-2) will stay out west to take on the Tulsa Hurricanes Saturday afternoon at 2 p.m. in its second game of the Saint Mary’s Thanksgiving Classic.